By now, few residents of Slovakia can be oblivious to the significance of November 17 - the day on which, 10 years ago, a student demonstration in Prague was violently suppressed by the police, giving birth to the Velvet Revolution and the end of communism in Czechoslovakia.
But if anyone in Slovakia - from Michalovce to Malacky, from Kysucké Nové Mesto to Komárno - still hasn't heard that Slovakia will be celebrating the 10th anniversary of its liberation from communism this November 17, the outpouring of cultural nostalgia and historical retrospectives scheduled for this week will surely cure his or her ignorance. 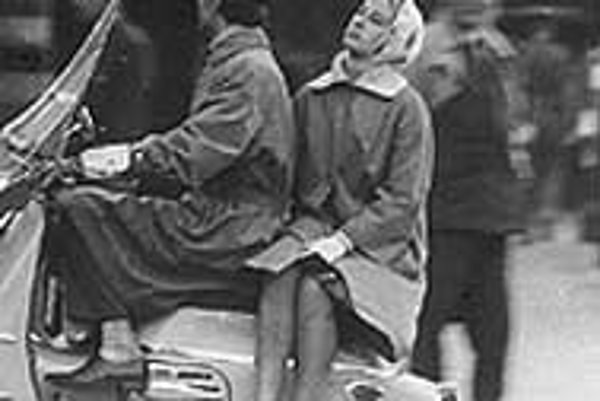 Font size:A-|A+  Comments disabled
By now, few residents of Slovakia can be oblivious to the significance of November 17 - the day on which, 10 years ago, a student demonstration in Prague was violently suppressed by the police, giving birth to the Velvet Revolution and the end of communism in Czechoslovakia.

But if anyone in Slovakia - from Michalovce to Malacky, from Kysucké Nové Mesto to Komárno - still hasn't heard that Slovakia will be celebrating the 10th anniversary of its liberation from communism this November 17, the outpouring of cultural nostalgia and historical retrospectives scheduled for this week will surely cure his or her ignorance.

Bratislava, where sister demonstrations were held 10 years ago that mirrored events in Prague, will host most of these cultural events. Here are a few of the highlights:

Ten years to the day after singing crowds filled Bratislava's SNP Square, the reconstructed Stará Tržnica ('Old Market') building which fronts the famous square will fling open its doors to Slovak and Czech pop musicians paricipating in a concert called "Ten Years After: A Concert for Freedom and a Changed Regime." Starting at 18:00, the concert will be broadcast live on Slovak Television (STV), as was a similar concert by Czech singer Karol Krýl 10 years ago. The best-known acts in attendance will be the Czech group Plastic People of the Universe, and the Slovak pianist Marián Varga and others. The concert is organised by the Milan Šimečka Foundation, STV and Bratislava City Hall; a giant video screen outside the building will entertain those who can't squeeze in to the concert hall. Admission free.

The classical music tribute to the Velvet Revolution misses a beat this year, as the 'Years after the Velvet Revolution Concert' will not be held until Sunday, November 21. Martin Händler, the conductor of the New Europe Festival Orchestra, presents the music of Ludwig van Beethoven (Prometheus, Concerto for Piano, Viola and Cello, and Synmphony # 7). Boris Kuschnir and Juri Smirnov on piano and Miklos Perényi on cello are the soloists. The Pressburger Philharmoniker, the concert's main organsier, is a big booster of the cultural affinities between Bratislava, Vienna and Budapest. Reduta at 19:00.

The Slovak and Czech Republic governments are getting together to co-organize the 'Evening of Remembrance,' an official state celebration of the Velvet anniversary. The Slovak Philharmonic's Reduta Concert Hall will echo with speeches by Petr Pithart, Chairman of the Czech Senate, Slovak Culture Minister Milan Kňažko and other state officials. The celebration, which is closed to the public, will be parallelled by similar official parties at regional government offices around Slovakia. The cost to the Slovak government, including live transmission on STV, was 1.4 million Slovak crowns ($33,200).

Communist propaganda films a blast from the past

The 901 film club screens a series of films this week as part of a celebration called, you guessed it, 'Ten Years After.' All films are in their original Czech or Slovak without subtitles, but they are worth watching even if you miss the subtleties of the dialogue. On November 16 it's Ucho ('The Ear,' 1970), a Czech film directed by Karel Kachyňa about a Czech married couple's search for a bug (the listening device variety) in their flat. The film was suppressed by the communist authorities for many years. Starts at 18:00

Ucho is followed the same evening by another famous Czech film, Akce B ('Action B,' 1953). Directed by Jozef Mach, this is a communist propaganda movie starring the Czechoslovak secret police (the dreaded ŠtB). The commie cops defeat a plot by international spies linked to capitalist running dogs and the Catholic Church. Akce B has probably been seen by millions of Czechs and Slovaks. Starts at 20:30.

On November 17, the Slovak film Papierové Hlavy ('Paper Heads,' 1996) will be screened. Directed by Dušan Hanák, Papierové Hlavy was a critics' choice as one of the best Slovak films of the 1990's, and features documentary footage of events following the 1989 revolution. Starts at 18:00. This is followed by the Czechoslovak film Valčík pre Milión ('A Waltz for Millions,' 1960), another work directed by Jozef Mach. This is commie propaganda at its best, featuring the story of young comrades falling in love during a state sporting event in former Czechoslovakia. Starts at 20:30.

On the following day, November 18, 901 offers the popular Czecholslovak film Žert ('The Joke,' 1968), directed by Jaromil Jireš and based on the novel by Milan Kundera. Žert is the story of a young man sentenced by a court to serve in the army in former communist Czechoslovakia because of an innocent joke he plays. Starts at 18:00.

Žert is followed by another Czechoslovak movie, Nad námi svítá ('Sunrise Above Us,' 1952), directed by Jiří Krejčí and telling the story of a gang of miners who finally realize that true heroism lies in work well done. Starts at 20.30.

And then, on November 20, the 901 film club welcomes the "Big Bastard Beat Band of Bratislava" to its stage. The Big Bastards are a Slovak group whose members are also actors in the Gunagu fringe theatre. The 'coolest' international and Czech communist-era pop will be accompanied by more communist propaganda films. Concert begins at 19:00.

The International Festival of Contemporary Music wraps up on November 17 with a gala concert by the Slovak Radio Symphony Orchestra featuring the music of the younger generation of Slovak composers.

The festival began on November 7 and brought 18 contemporary music concerts performed by Slovak and international artists to Bratislava music venues. More than just a music festival, Melos-Ethos was set in Bratislava in November in recognition of the events of 10 years ago. Anders Loguin, the conductor of the Swedish ensemble Kroumata, told The Slovak Spectator that things had changed since he was here last. "When I first came to Bratislava in 1983, the buildings were grey - and they still are - and the people had faces like walls. Those faces have changed."

Fifty years of communism came close to destroying liberal culture and education in the former Czechoslovakia. To help their eastern-bloc colleagues protect seom measure of academic freedom, a group of western intellectuals like Barbara Day from Oxford University helped to establish the 'Underground University,' a clandestine communist-era academic circle that promoted international contacts.

Day recently published a book called 'Velvet Philosophers,' available both in English and in Slovak ('Zamatoví filozofi'). The book is a valuable memoir of the communist period, when domestic and foreign academics defied communist government vigilance to maintain civic and cultural ties. Lectures were held unofficially at private homes. In the decade after the cirlce was formed in 1978, more then 140 lecturers came to Czechoslovakia to talk about philosophy, economy, architecture and the arts. The book was supported by the Ján Hus Educational Foundation, and can be purchased for 750 Sk at the Ján Hus office on Panenská 4.

Another 'child' of the Velvet Revolution, according to its director Václav Macek, the Month of Photography festival (October 28 through December 12) highlights a series of documentary phototographs taken within six months of the Velvet Revolution by Andrej Bán, as well as some shots of 1990's Slovakia (Umelecká beseda, Dostojevského rad 2).

The fetid atmosphere of 1960's communist Czechoslovakia is captured in another exhibition, this one featuring the pictures of Bohumil J. Puskailer, a Slovak photographer who now lives in Canada. The feature 'Palermo Life' depicts the streets of Bratislava, with shots of children, old cinemas, the Jewish synagogue destroyed by the construction of the New Bridge, local hippie culture and a few pictures of the noble Alexander Dubček (House of Culture, Nám. SNP 12).

US gets a taste of Velvet nostalgia

Since September this year, officials from the Czech and Slovak Embassies in the US, with the support of Czech President Václav Havel and Slovak President Rudolf Shuster, have been touring American cities in support of a festival called 'Ten Years After The Velvet Revolution.'

Among the 38 events this festival of Czech and Slovak culture brings to American viewers are an exhibition of Slovak Contemporary Art (November 13) at the Slovak Embassy in Washington, showing the works of painters Rudo Fila, Milan Paštéka and others. The exhbition runs until December 12.

The Corcoran Museum and Gallery of Art in Washington on November 15 stages an exhibit of the various cultures which have enriched Slovak history - including the Jewish, Hungarian, and Romany nations. The exhibit includes documentary films, slides and books. The exhibit marks the first time, that the once-rich culture of the Jewish community in Slovakia will be comprehensively presented in the US.

The opening of the Washington exhibition will be accompanied by a concert played by Slovak ex-patriates such as Tania Halko-Susi (the New York Ensemble), Vladimir Martinak (Duo Basileum) and Toronto denizen Peter Breiner, a celebrated pianist and composer. Not to be missed is the Romany violonist Ondrej Janoška, who has been dubbed the 'Paganini from Pressburg' (the former name of Bratislava). For further information call 202 639 17 70.