President Rudolf Schuster dismayed government politicians with a critical State of the Nation address delivered in parliament on November 2. Taking his cue from soaring unemployment and rising social distress, Schuster aimed tough words at what he called the "political egotism" of the country's ruling parties.
"We've gone wrong somewhere," he said during his 45-minute speech. "I don't see a sufficient quality of life in Slovakia. People don't need any more promises, they need solutions." Among the solutions that the president proposed were quickening the pace of economic reform, overhauling the nation's tax system, improving the functioning of government and revamping the constitution. 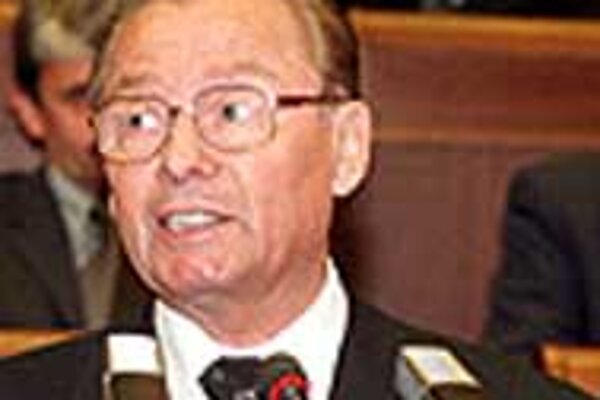 Font size:A-|A+  Comments disabled
President Rudolf Schuster dismayed government politicians with a critical State of the Nation address delivered in parliament on November 2. Taking his cue from soaring unemployment and rising social distress, Schuster aimed tough words at what he called the "political egotism" of the country's ruling parties.

"We've gone wrong somewhere," he said during his 45-minute speech. "I don't see a sufficient quality of life in Slovakia. People don't need any more promises, they need solutions." Among the solutions that the president proposed were quickening the pace of economic reform, overhauling the nation's tax system, improving the functioning of government and revamping the constitution.

Schuster, who took office on June 15 after the first direct presidential elections in Slovak history, said he was speaking in his capacity as an ordinary citizen, not as the country's highest executive branch official. "I'm neither a philosopher nor an economist nor a political scientist," he said. "I'm a citizen of the Slovak Republic, and I prefer pragmatism as the best way to solve our problems."

Although he was careful not to ctiticize any politician by name, many members of parliament (MP's) for governing parties felt they had been ill-used. They also accused Schuster of a certain measure of hypocrisy, as the president hinself had served as the chairman of the coalition SOP party before being elected to his current office, and thus bore some responsibility for the wrongs he identified.

"I participated in negotiations during the formation of the current government," said Béla Bugár, head of the coalition SMK party that represents the country's Hungarian minority. "If I were in Mr. President's shoes, I wouldn't have talked about the "egotism" of parties, because the SOP itself fought for certain interests."

The coalition agreement signed by the four parties of the current government contained a clause committing all parties to support Schuster for president. According to politicians at the time, the SOP gave up one seat in cabinet to secure the deal.

"If Mr. President meant [by his phrase 'party egotism'] political parties which arose just before [September 1998] elections, and whose purpose was to take seats in state institutions, then I agree with him," said Ľubomír Fogaš of the ruling SDĽ party.

Schuster formed the SOP in February, 1999, less than eight months before parliamentary elections. The party captured over 8% support, and was awarded 13 seats in parliament and two cabinet posts.

But political scientist Luboš Kubín, who works with the Slovak Academy of Sciences, said that Schuster's critical speech had been a calculated act, designed to break his political ties with the government which nominated him for the presidency.

"For me this speech was a signal that the president was stepping out of the coalition agreement," said Kubín, explaining that Schuster wanted to put some distance between himself and the leaders of ruling coalition parties. "Schuster realises that his mandate [five years, until May 2004] is longer than the mandate of the current government [four years, until September 2002], and he wants to be politically independent."

Opposition politicians, for their part, approved of Schuster's speech. Ivan Gašparovič of the opposition HZDS party said that "I agree with his criticisms with one reservation - they were too soft."

Schuster said that government politicians had disappointed voters by failing to show adequate leadership on Slovakia's economic and social problems. "Government solutions are often a case of too little, too late," he said. "People naturally get the impression that the government doesn't know what it wants." The president also said that the cabinet works more through personal ties than on the basis of political or ideological convictions, making its operation "untransparent."

The political opposition, said the president, bore less of the blame, since it was "highly skilled" and contributed to the solving of national problems. But he critized "the appeal for civil disobedience of one of the people who participated in the building of this country [former Prime Minister Vladimír Mečiar - ed. note], which will lead to the destruction of the state. I think that calls for pre-term parliamentary elections are equally irresponsible."

Mečiar, as chairman of the HZDS, called this fall for displays of civil disobedience such as strikes and protest rallies, and said in a full page interview in the Národná obroda daily paper on October 23 that pre-term elections were likely within the next eight months.

Schuster also accused the government of manipulating state-run Slovak Television (STV). "The government has to be brave enough to tell Slovak people the truth about the economic situation," he said. "It is especially important that in this field, STV isn't under political control." Immediately after the president's speech, STV Programme Director Ľubomír Fillo challenged the president to be more concrete in his criticism of STV.

Turning his attention to economic issues, Schuster said that although Slovaks now pay one of the highest rates of tax in the world, the country is still unable to properly equip its police cadres, its military forces, or its education and health care systems. Reform of the tax system was needed, said Schuster, as well as stricter enforcement of tax obligations.

Schuster ventured onto controversial ground again in his call for the revival of 'domestic sources' of entrepreneurial capital, something which had been the mantra of the Mečiar government's privatisation policy. "Foreign direct investments are welcome, but we have to rely mainly on domestic sources to build up our country," the president said.

HZDS MP Sergej Kozlík, a former Finance Minister in the 1994-98 Mečiar cabinet, greeted these words with applause, but Deputy Prime Minister for Economy Ivan Mikloš was less supportive. "Because of the former government's policy, domestic sources are now in such poor shape that Slovakia must rely on FDI much more than before," Mikloš said in the hallway of parliament after the speech.

Schuster labeled the October report of the European Comission, which had warmly praised political and economic reforms in Slovakia since last fall's elections, as a "clear succes for our country." However, in apportioning credit for this success, Schuster included the policies of the opposition parties. "I appreciate the support of the HZDS for Slovakia's membership in the EU as well as in NATO. I respect the SNS position calling for neutrality for Slovakia, but there is now no place for neutrality in central Europe," Schuster said.

"This [praise of the HZDS] was a signal to the HZDS that if it wins the next elections, Schuster will ask the HZDS leader to form the next government," Kubín said. Schuster and Mečiar held a series of closed-door meetings in late August, and while neither man revealed what the topic of discussion had been, Kubín speculated that Mečiar had wanted to know where the president stood on the composition of the country's next government.

In the end, Kubín said, Schuster's speech had been well prepared by his "political team," but lacked an element of emotion or moral fibre. "He said his main value was pragmatism, but pragmatism does not have a value content," Kubín said. "Pragmatism means looking for the easiest way."