The Bratislava suburb of Petržalka, which houses almost one-third of the capital city's population, is a prime example of socialist-era housing in Slovakia. Tenants live cheek by jowl in ugly housing estates known as 'paneláky,' Slovak slang for the identical concrete panels that were hastily stacked on top of each other in the 1970's to create the walls of each apartment building.
Since mass construction of Petržalka's paneláky began in 1974, the site has widely been regarded as the ugliest place to live in the entire country. But now that many of the buildings are amost 30 years old, they have slowly begun to crumble, bringing warnings from architects and government officials that the country's paneláky are not just ugly - they are also dangerous. 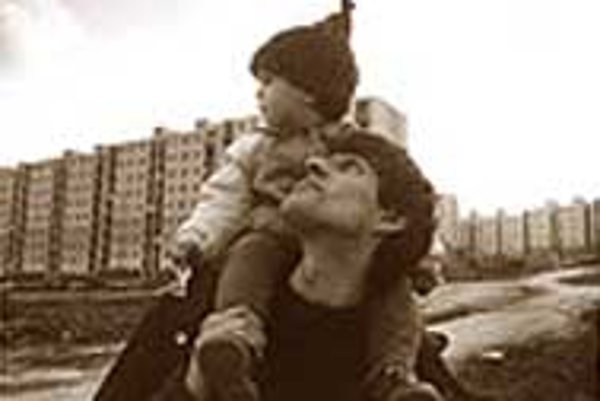 Font size:A-|A+0
The Bratislava suburb of Petržalka, which houses almost one-third of the capital city's population, is a prime example of socialist-era housing in Slovakia. Tenants live cheek by jowl in ugly housing estates known as 'paneláky,' Slovak slang for the identical concrete panels that were hastily stacked on top of each other in the 1970's to create the walls of each apartment building.

Since mass construction of Petržalka's paneláky began in 1974, the site has widely been regarded as the ugliest place to live in the entire country. But now that many of the buildings are amost 30 years old, they have slowly begun to crumble, bringing warnings from architects and government officials that the country's paneláky are not just ugly - they are also dangerous.

With lifespans ranging from 30 to 70 years, paneláky housing estates around the country are in dire need of mass reconstruction. And experts say that time is running out - if the government does not take immediate action to remedy the problem and reinforce deteriorating communist-era buildings, the lives of paneláky-dwelling citizens may be lost.

"These buildings are aging and deteriorating," reads a draft of the Slovak Construction Ministry's 1999 proposal to deal with the aging paneláky. "If nothing is done to prevent further deterioration, it could make these flats unsafe and put the inhabitants in danger."

Although every major town in Slovakia is blighted by its own paneláky, the most notorious examples - run-down, massive structures up to 300 metres in length - exist in Petržalka. According to Štefan Šlachta, the Dean of the Academy of Fine Arts in Bratislava, Petržalka was a rural village with family houses until 1974, when the first paneláky were erected.

In 1968, Šlachta said, a decision was taken to urbanize the south shore of the Danube River in Bratislava. A competition was then organised by the International Union of Architects to build a community that was sufficiently large to house 60,000 people. However, the communist government cancelled the competition and began building identical concrete blocks of flats instead.

From 1974 until the fall of communism in 1989, the paneláky were constructed at a breakneck pace in order to handle an influx of workers who had been sent to Bratislava by the central government to work in regional industries, particulary the Slovnaft refinery. The workers arrived in droves, and had to be put on waiting lists for Petržalka flats, Šlachta recalled. In its haste to accomodate them, the communist government contracted construction firms to slap together 12-storey blocks of flats from identical panels.

The result, everyone agrees, is an eyesore. "When we talk about Petržalka's flats, we're not talking about architecture," Šlachta said. "We're talking about the construction of ugly buildings."

Today, over 128,000 people live in Petržalka's aging paneláky alone. "They're like a deck of cards," said architect Michael Walshe of Weldon Walshe. "And they're dangerous - take one of the cards out and the whole house falls down."

Ľudmila Janošovová, the director of flat management at Petržalka City Hall, said that the mostly 20-year-old paneláky in Petržalka are today in "adequate" condition, but admitted that many of the buildings are in need of repair. "We realise that we have to take care of some things," she said, "like the roofing and the insulation."

Insulation, or lack thereof, is the key, explained Walshe. Each concrete panel in the paneláky is internally strengthened by steel mesh, while panels are connected to each other with steel hooks - the 'glue' that holds the paneláky structure together. The hooks, a kind of steel connective tissue, are encased in concrete, which is intended to insulate them against corrosion and the weather.

However, the original paneláky built in the communist era are unfortunately not water-proof and offer little insulation, thereby exposing their steel 'glue' to the elements. Walshe estimated that the concrete covering the hooks would have to be at least 7.5 centimetres thick in order to afford sufficient protection - a thickness that few paneláky can boast. Although some buildings have been covered in recent years with an insulating outer shell, Walshe said that extensive damage to the steel has likely already occurred

"As a result, you can see that the concrete is cracking on some buildings," Walshe said. "These cracks run around the weakened steel and are filled in with mastic [a type of cement made with asphalt used to seal cracks], which is not effective. Many of these buidings are weakened and they need to be reinforced."

The Construction Ministry agrees. According to spokeswoman Liliana Bolemant, the ministry is currently preparing a programme designed to reinforce all paneláky flats in Slovakia by the year 2010. "A complex concept of renewal must be prepared for the paneláky," she said, but refused to supply details as to how much the project would cost, where funds would come from and how the reinforcement would be carried out.

According to Oto Hornáček, president of the Hornex construction firm in Bratislava which specialises in renovating communist-era architecture, mass renovation of all the paneláky flats in Slovakia is impossible. "There is no money in Slovakia to do this," Hornáček said.

Walshe explained that ownership of paneláky flats has passed from the state to private hands. The new owners are unaccustomed to paying the cost of upkeep on their flats, and therefore are reluctant to cover even basic maintenance.

"If an elevator breaks down it will likely remain broken, because building managers struggle to collect even enough money for basic maintenance," he said. "It is impossible to get enough for a big renovation."

If the money is acquired, both Walshe and Hornáček are confident that the paneláky can be upgraded. Hornáček said that the panels constituting the blocks of flats are so flimsily made that they can easily be replaced if damaged.

Walshe, meanwhile, suggested that the best and most cost-effective alternative (short of simply tearing the paneláky down) was to install steel reinforcements from the interiors of each flat to counteract the weakened exterior supports.

Both ideas have drawbacks, the men said. "If you reconsruct a paneláky," Hornáček said, "you must move all the people out for the duration of the contruction." Walshe agreed that the required renovations would be "very distractive to tenants and relatively expensive."

"But it has to be done," Walshe continued. "A massive reconstruction should have already started. And the state will have to intervene [with privately owned flats] and fix the problem or there will be a tragedy - and not in the too-distant future."