Are you planning to have a medical operation? Do you need an ownership certificate for your house or a flat? Are you getting a divorce, and hoping to make it quick and painless? Many Slovaks believe there is only one sure way to get what you want - an envelope full of money slipped into the pocket of the right person.
Slovak state institutions and the public sector are regarded by the country's citizens as rife with corruption. Private businessmen and self-employed entrepreneurs often complain that almost no business can be done unless someone's palm is greased. "Bribery is everywhere where decisions are made - in the state administration, the courts, the whole public sphere," said Igor Boór, a Bratislava property lawyer who has frequent contacts with municipal government clerks around the city. 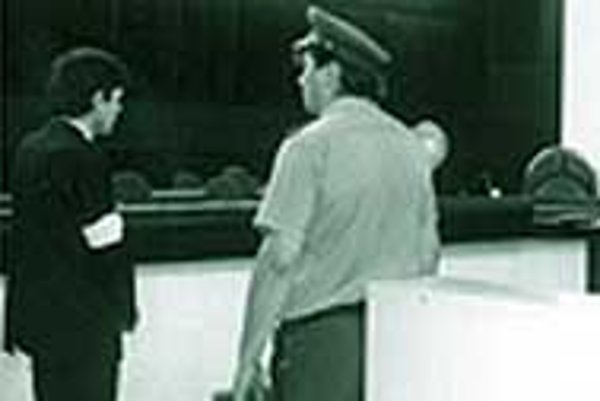 Font size:A-|A+  Comments disabled
Are you planning to have a medical operation? Do you need an ownership certificate for your house or a flat? Are you getting a divorce, and hoping to make it quick and painless? Many Slovaks believe there is only one sure way to get what you want - an envelope full of money slipped into the pocket of the right person.

Slovak state institutions and the public sector are regarded by the country's citizens as rife with corruption. Private businessmen and self-employed entrepreneurs often complain that almost no business can be done unless someone's palm is greased. "Bribery is everywhere where decisions are made - in the state administration, the courts, the whole public sphere," said Igor Boór, a Bratislava property lawyer who has frequent contacts with municipal government clerks around the city.

According to Boór, the situation has changed for the worse in the past 10 years since the Velvet Revolution. "The traditional bottle [of alcohol] and box of chocolate was enough to do the magic ten years ago," he said. "Today, these gifts would only suffice to get you through the door."

At the end of October, international corruption watchdog Transparency International published the results of a survey on levels of corruption in 99 countries worldwide. Countries were given a mark out of 10 - called a Corruption Perception Index - by renowned international agencies. Slovakia ranked 53rd, down from 47th last year, with a 3.7 score.

Certainly, official statistics do not reflect a significant problem with bribery. Data provided by the Slovak Prosecutor General's Office shows that last year, 35 people were charged with accepting bribes in Slovakia, up from 23 in 1997 and an average of 27 from 1992 to 1997. Sixteen of those charged in 1998 were eventually convicted, up from 10 per year during most of the 1990's.

However, public perception belies the figures produced by the government. A survey of 850 Slovak businesses conducted by the Centre for Economic Development in April and May, 1999, found that 83.95% of respondents had experienced corruption in state administration. The most corrupt branches of the state, the survey found, were Slovak labour offices, municipal governments, tax authorities and the courts. Government ministries and other central state bodies were thought to be the least corrupt.

Corruption is not confined to state officials, according to public opinion, but is rampant among state employees like doctors. A 1998 survey done by the Statistics Office found that 75% of people believed that corruption exists in the health care system, and fully 54% of people had personally engaged in bribery of hospital personnel.

Health professionals dispute the figures. "There is a myth surrounding corruption in heath care," said Ladislav Petričko, president of the Slovak Chamber of Doctors, in an interview with The Slovak Spectator. "The general notion [that bribery exists] is so widespread that many patients who are not happy with treatment in hospitals automatically assume that it is because they did not pay in advance for better services."

The main problem, according to Petričko, is that people often feel obliged to give money because they do not know how much medical care is covered by their monthly health insurance payments. "There is not enough transparency in the financing of health care," Petričko said. "The average citizen does not understand that we no longer have a free health care system, and nor does he understand that by paying health insurance, he has already covered the cost of his treatement before he enters the doctor's office."

Petričko did not deny that cases of corruption existed in hospitals, but said a definition of what corruption involved should be agreed on. "We should recognize the difference, for example, when a financial bribe is given to a doctor before an operation as a way of ensuring better service, a better room and better medicine. This of course is not acceptable. But after an operation people often give doctors what we call a "gift" that is usually a bottle of liquor or a box of chocolate as a way to say 'thank you'."

Ivan Šándor, director of the Justice Ministry's Criminal Law Section explained that bribery was criminalised under a 1962 amendment to the Criminal Code. Those who were convicted of offering a bribe were liable to three years in prison, while anyone recieving a bribe could serve up to a five year term. Even 'indirect bribery' - asking for a bribe in return for a favour - could land culprits in prison for up to two years.

In 1995, however, the Mečiar government announced its "Clean Hands" programme, which aimed to fight corruption and reduce bribery and clientelism in society. At the same time, the law that made giving bribes punishable was dropped from the Criminal Code altogether, and was not reintroduced until the code was amended in January, 1999. A further amendment that took effect on September 1, 1999 made persons accused of bribery liable to up to ten years imprisonment.

Šándor said that Slovakia had made slow progress against bribery because the offence had been decriminalised from March 1995 to the beginning of January 1999. He added that it was virtually impossible to convict someone of bribery because the crime often took place in private between two people, meaning that courts had no witnesses to confirm either the plaintiff or the defendant's testiomony.

"Statistics show that the number of people convicted of direct and indirect bribery does not reflect the existing situation in Slovakia," noted Šándor. From the beginning of 1999 until August, only six people were sentenced for bribery.

Stanislav Fischer, head of the Corruption Squad at the Police Presidium (the highest police organ in the land), told The Slovak Spectator that the police were powerless to act against bribery unless state officials and other recipients of bribe offers reported the incident. "We know that it is happening, but we can't act if people don't fulfill their duty," he said.

According to Fischer, corruption exists in all walks of public life. "It begins on the local level and reaches up to the central organs of state administration," he said.

In the private sphere, Fischer said, many Slovak firms actually treat bribes issued to smooth a transaction as a business expense, a tax write-off. "It is interesting that in Slovakia, provisions for mediating business transactions are considered an expenditure. Practically speaking this means that if an entrepreneur pays a bribe, if he greases someone's hand, he can write it off on his tax report." Fischer said that according to a report prepared by his department this year, economists estimate that generally five to ten percent of the sum of every business transaction is money paid in bribes.

Jan Tóth, a senior analyst with the Dutch investment bank ING Barings in Bratislava, said the main reason why state employees were so susceptible to bribery was the poor salaries paid by the government even for top specialists. "The state pays these people maybe one third of what they would get if they worked in the private sector," he said. "Low wages have two effects - they either drive quality specialists out of the state sector to look for more lucrative jobs, only to be replaced by incompetent and unethical people, or the top [state] management succumbs to temptation and becomes corrupt."

Tóth said he thought that even the highest Slovak state representatives engaged in corruption, something almost forced upon them by the way political parties are financed by state. "Every registered political party gets one million Slovak crowns [$25,000] per year from the state budget. This is not enough to sustain a party at a reasonable level," he said. "Therefore, parties are forced to look for different financial sources if they want to survive. Usually they create links with banks or state-owned factories, and thereby hope to secure financial backing for their groups."

In such an environment, Tóth said, it was difficult to attract foreign investors to Slovakia. "Foreign investors want to see that a state in which they want to invest is on the way towards transforming its institutions and legal norms to common western standards. The Czechs have more investment than we do due to the fact that they have clearly stepped on the path of global and European integration. Slovakia unfortunately has not joined NATO or the OECD yet."

According to Anton Marcinčin, a research fellow at the Slovak Foreign Policy Association, foreign investors very often complain that bribes are required of them in Slovakia. "Even a small clerk asks for money," Marcinčin said, "and even after accepting the bribe he often does not perform what he has promised. Another aspect is that no respectable company can afford to risk its reputation in a bribery scandal. This unhealthy environment invites the more dubious entrepreneurs into the country.".