The Slovak Spectator (TSS): Your latest album [Nočná optika, or 'Night Optics') was a big success in Slovakia this year, as usual. Now you have a new live CD out [Koniec sveta, 'End of the World,' released in September]. What makes you so successful?
Richard Müller (RM): Nobody expected that Night Optique would be such a success. And to bridge the gap between two studio albums, Universal proposed to make a CD with live music from one of my concerts. I think the idea was a good one, because there is a place in every fan's discography for a live production by his favourite musician. Studio albums are often very boring, although they do open up a lot of room for an artist's creativity.
TSS: Do audiences react to you differently these days than during communism, when you were getting your start? 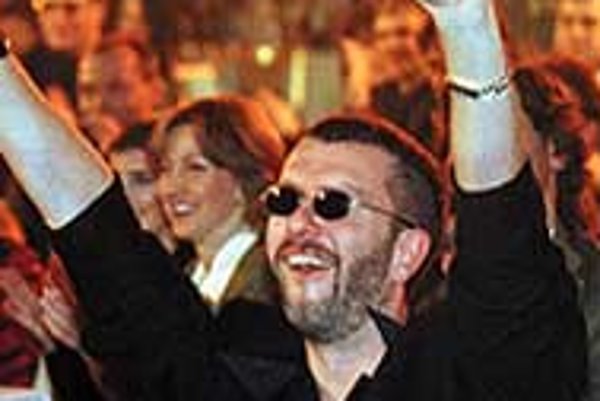 Font size:A-|A+  Comments disabled
The Slovak Spectator (TSS): Your latest album [Nočná optika, or 'Night Optics') was a big success in Slovakia this year, as usual. Now you have a new live CD out [Koniec sveta, 'End of the World,' released in September]. What makes you so successful?

Richard Müller (RM): Nobody expected that Night Optique would be such a success. And to bridge the gap between two studio albums, Universal proposed to make a CD with live music from one of my concerts. I think the idea was a good one, because there is a place in every fan's discography for a live production by his favourite musician. Studio albums are often very boring, although they do open up a lot of room for an artist's creativity.

TSS: Do audiences react to you differently these days than during communism, when you were getting your start?

RM: That's a very big question. It's clear that before 1989, communism made a number of subjects taboo in society, and artists were influenced by that. Popularity was a much more dynamic phenomenon back then. We were at the crest of the wave of people's interest, but at the same time there was no such thing as tabloid newspapers. Today, fame and popularity is fed by the whole tabloid press, and in fact, popularity is based on tabloids. We often find ourselves reading untrue things in the paper about ourselves which are on the verge of being illegal.

The other thing about popularity is to define what it is that makes you popular. I am well known, maybe because of how I look, that is, wherever I appear my dominant figure is very likely to catch people's eyes. And it was the same back in the 1980's. But that's just one aspect [of popularity]. I personally distinguish between being well-known and being popular. If people recognize me, it means that I am well known, not that I'm popular. Popularity depends on individual people's tastes and reactions to a given artist.

The third thing is the difference between Slovakia and the Czech Republic. There was a time when I was much more popular in Bohemia than in Slovakia. This was both before and far after the revolution. After the revolution, for over five or six years I thought that every concert in Bohemia, even if it were in the smallest village, was better than a big concert in Bratislava or in any other Slovak city.

But now, to be honest, this has changed dramatically. Three or four years back I returned to the stage in Slovakia and I've played several tours since then. The positive change that I noticed was in the emergence of new, great audiences - young, creative, ambitious people who I'm glad to share a concert hall with. And my popularity in Bohemia, influenced largely by the split of Czechoslovakia in 1993, naturally became less intense and even stagnated, because whether we like it or not the barrier which was created by the split exists here, and Slovak popular artists have a hard time establishing themselves in the Czech Republic.

Czech artists, however, have it easier here in Slovakia, because of the nation's mentality. Slovak audiences accept the increased popularity of Czech groups, but this does not work the other way round, and I dare say that the further from the border you go, the more visible this trait becomes in Czech audiences. I have always had the feeling that Czech audiences were more spontaneous, more relaxed, and I always thought they were more open to accepting me as an artist than were Slovak fans. But now, looking back, I like to think that this is how it was supposed to be, that both I and the Slovak audience had to find our ways to each other.

TSS: Do you write your music for the international audience or do you concentrate on the Slovak audience?

RM: We had this group called PPE, an absolutely avant-garde rock experiment for a short period in 1995. With this band we played in Austin, Texas at an international music festival and the band evidently addressed the international audience. But the music we played was more in the independent corner. I can imagine ourselves playing in America in clubs and on college campuses. But I don't see any reason for me to sing my songs in English in the official pop music mainstream.

TSS: Can you name some of your favorite Czech or Slovak bands, something that attracted your attention recently.

RM: In Slovakia it's the Free Faces, IMT Smile, B3, and in the Czech Republic the band Lucie. I always liked them.

TSS: Your popularity in Slovakia coincided with that of a few other domestic acts like Senzus, which has questionable artistic merit and had perhaps closer connections to the Mečiar government in power at the time. Has there been a 'dumbing down' of popular musical tastes in this country?

RM: My popularity began some five years ago, when all this commercial stuff was already present on the Slovak scene. I don't think so much about why somebody else is a star here. I have a democratic view on this topic. I don't like to degrade other people's music, even if it has nothing in common with my view on quality art, or with my personal taste.

Maybe it's because music here has always been operating on capitalist terms, that is, you had to be professional to get to play at concerts. Of course, there were several ways to achieve this in the past. Some musicians were regular guests at the central office of the Communist Party, trying to influence the bureaucrats. Lobbying functioned the same way then as it does now. But the most important thing about the music business is the absolute dependence of an artist's success on the interest of the audience. So whatever lobbying you put in, and however well an artist may be managed, it does not mean anything when the product does not attract people. If a product is not convincing enough for people it is just a greenhouse flower. It does not mean anything and it misses the point. So if somebody manages to make a success with what he is doing, if he wins popularity and makes big money, I accept that. That's how it works in America, right?

Take the story of Lunetic, a very popular Czech group made up of young boys. You can read articles everywhere criticizing the group, their music, the whole concept of their act. But they've sold over 200,000 copies, and by chance I met them a few days ago at a hotel, and I can say that they are probably the nicest people that I have met recently. So I don't see any reason to pick on them, just because everybody else is mocking and criticizing them.

TSS: Last year, during the election campaign, some bands played at political rallies for different parties. Has politics had any impact on culture here?

RM: As long as there is pluralism in society, people can express themselves in any way they like, and it's up to the artist to decide if he wishes to communicate or not communicate with this or that political party. I don't get involved in this, but I don't criticise people who do get involved. It's their own business.

TSS: Do you think that Slovak artists can be successful abroad?

RM: I believe that one of us could and hopefully will soon make a breakthrough abroad, just like it happened to the Austrian artists Falco and the group Opus, both of whom had number one hits in America. So I don't see any reason why it shouldn't happen here, a few kilometers away from Austria. From the perspective of "human software," there are plenty of top quality musicians in Slovakia who definitely have the capacity to do it. But I never had these ambitions, I am too far away from the idea of becoming a superstar, and I'm not quite sure whether I would be able to compete with Elton John.