For foreign investors and the international financial community, Deputy Prime Minister for Economy Ivan Mikloš is something of a godsend - a heavyweight reformer who talks sense and has managed to convince his cabinet colleagues of the need to cut government spending.
And yet, Slovak economic professionals say that the myth may have outgrown the man. As a reformer, they say, Mikloš now has very little support in cabinet, and in showdowns with the country's other main economic architect, Finance Minister Brigita Schmögnerová of the former communist SDĽ party, Mikloš is losing an increasing number of important battles. 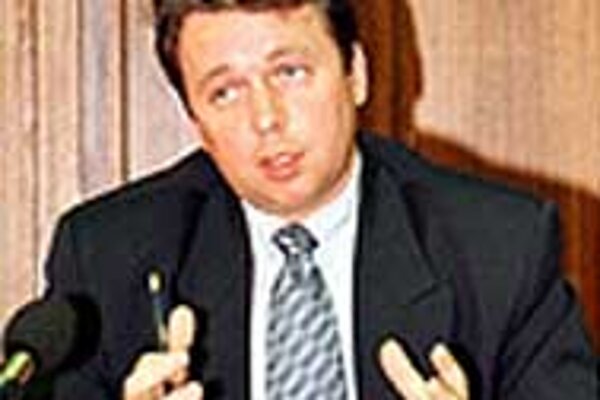 Font size:A-|A+  Comments disabled
For foreign investors and the international financial community, Deputy Prime Minister for Economy Ivan Mikloš is something of a godsend - a heavyweight reformer who talks sense and has managed to convince his cabinet colleagues of the need to cut government spending.

And yet, Slovak economic professionals say that the myth may have outgrown the man. As a reformer, they say, Mikloš now has very little support in cabinet, and in showdowns with the country's other main economic architect, Finance Minister Brigita Schmögnerová of the former communist SDĽ party, Mikloš is losing an increasing number of important battles.

How much longer Mikloš is able to coax the Slovak cabinet into reforms, analysts say, depends entirely on whether he is able to recruit support. New Economy Minister Ľubomír Harach, installed after the resignation in mid-October of Ľudovít Černák, may give the Deputy PM the boost he needs, but if not, his star is bound to fall.

For Matthew Vogel, a senior economist with investment bank Merrill Lynch, Mikloš is the heart and soul of economic reform in Slovakia. "He's a smart guy who has proved his confidence and ability in debates with foreign investors," said Vogel. "He obviously does a very good job."

Vogel added he did not think that the appointment of Harach would materially change Mikloš's position, since the Slovak Economy Ministry was not responsible for the design of economic policy in the country. This was a job shared by Schmögnerová and Mikloš, he said.

These views were supported by Ján Tóth, a senior economist with Dutch investment bank ING Barings in Bratislava. "Mikloš's very presence influences the opinions of foreign investors when looking at Slovakia and its reforms. For them, Mikloš guarantees that the country won't take the Russian direction in its economic transformation," Tóth said.

On the other hand, analysts said, Mikloš's bright reputation belied his true - and relatively weak - position in the government. As a firebrand pushing for structural economic reforms, Tóth remarked, he was frequently forced to compromise with Schmögnerová, who favoured more piecemeal efforts designed to keep the peace among her leftist electorate.

Ján Oravec, director of the strategy section at the Economy Ministry and one of the country's few right-wing economists, said that Mikloš had suffered two recent defeats on the most important economic issues before the cabinet - the proposed budget for 2000 and tax reform.

Schmögnerová plans to cut corporate tax from 40% to 35% next year, although many economists have urged her to make stiffer cuts, even to 20%. She has also proposed to levy additional indirect taxes to make up for lost budgetary revenues rather than cut expenditures significantly in 2000.

According to Oravec, Mikloš has not opposed the Finance Minister's plans as firmly as he should have. "He [Mikloš] is soft. He doesn't really fight for the things that he believes in. When there are bills passing before his eyes that totally go against what he believes in, then he cannot simply close his eyes - he has to stop them."

Two of Mikloš's former colleagues from the economic think tank MESA 10, Marek Jakoby and Peter Pažitný, say they have been disappointed with what Mikloš has been able to achieve in government for lack of support. "He has neither space to maneuver, nor, in many cases, even the support of the Prime Minister," said Jakoby. According to Pažitný, the performance of the cabinet shows that ministers are still serving the interests of their own departments rather than looking at the needs of the economy as a whole.

The party or the minister?

According to Ján Lángoš, the chairman of the Democratic Party (DS) to which Mikloš belongs, it was difficult for Mikloš to co-ordinate reforms when one party in particular was always trying to slow the process of change. "The [socialist] SDĽ is the strongest party in the government, and that's why the role Mikloš has is a tough one," Lángoš said.

Despite the fact that Schmögnerová was an SDĽ member, some analysts said the Finance Minister had attempted to balance her political leanings with her professional understanding of the need for reform. "It's hard to see how things could be done without Schmögnerová's obvious participation," Vogel said.

What is more, the fact that Schmögnerová was virtually the only politician in the SDĽ with a solid background in free market economics made her position virtually unassailable. ING's Tóth said Schmögnerová should use the strength of her position to help Mikloš, and to push through the structural reforms she knew to be necessary.

"You could hardly find a better Finance Minister in the SDĽ than Schmögnerová," Tóth said. "If she took a few more risks and told ministers who didn't agree with the amount of money their ministries are supposed to get from the state budget next year, 'Well, you can always fire me,' they wouldn't say a word. I am quite sure that she wouldn't be recalled."

With Mikloš facing an array of old-style SDĽ socialists in cabinet, and Schmögnerová torn between her party and her conscience, many economists are wondering how new Minister of Economy Ľubomír Harach will affect the balance of power between reformers and their opponents.

In the minds of some foreign investors, Harach will not be a key figure in the government because the Slovak Economy Ministry is not a key post. The Democratic Party's Langoš explained that in Slovakia, the Economy Ministry was mainly responsible for administering companies in which the state owned a majority share. Tóth added that with so many firms still on the state's books, the ministry had an enormously wide portfolio - but one without much actual power in setting policy.

Where Harach may make a difference, however, is as a fellow-reformer who brings a clean-hands approach to government. "Harach is certainly not as biased as Černák was, and I think that Mikloš can persuade him of many things," Tóth said.

Harach has a good track record from 1994, when he served as the Minister of Education in the government of Jozef Moravčík. His most important task in his new post will be to meet the expectations of both foreign investors and the public, both of whom have called for more transparency in the ministry's administration of state property.

Harach began his term as minister by showing fight - he sued the largest Slovak daily, Nový Čas, for publishing a story implying that he owed favours to a meat company he once worked for. "Harach started his career as Economy Minister with a skirmish with the media," said MESA 10's Pažitný. "The question is whether he is prepared to win this game. He seems much more serious than his predecessor."

"Harach cannot change the political balance in the government," he said.