Černák quits as Minister and MP

Economy Minister Ľudovít Černák gave up both his ministerial post and his mandate as a member of parliament on October 18, bowing to public pressure to resign after a series of economic scandals that had sullied his reputation.
Černák left his post vowing to sue journalists who, he felt, had turned him into a scapegoat for every cabinet mis-step. "I became just a punching bag, good for slapping in the face any time, and that was the straw which broke the camel's back" Černák said in an interview with The Slovak Spectator shortly after a press conference on October 19. 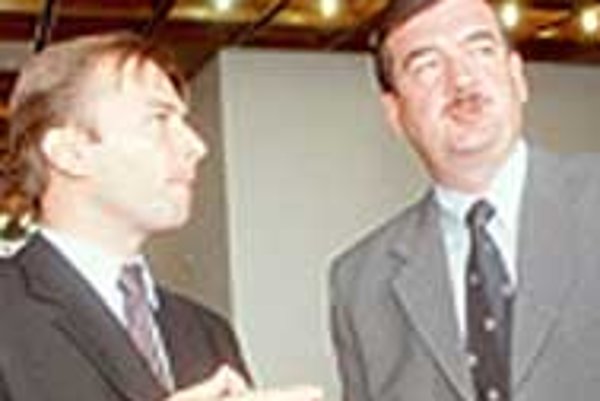 Font size:A-|A+  Comments disabled
Economy Minister Ľudovít Černák gave up both his ministerial post and his mandate as a member of parliament on October 18, bowing to public pressure to resign after a series of economic scandals that had sullied his reputation.

Černák left his post vowing to sue journalists who, he felt, had turned him into a scapegoat for every cabinet mis-step. "I became just a punching bag, good for slapping in the face any time, and that was the straw which broke the camel's back" Černák said in an interview with The Slovak Spectator shortly after a press conference on October 19.

Other members of the cabinet, however, welcomed Černák's move, saying that it would both clear the air surrounding the Economy Ministry's handling of tenders for state contracts, and improve public and investor confidence in the government as a whole.

Ľubomír Andrassy, vice-chairman of leftist SDĽ party, disagreed with Černák's claim that he had been victimised by the media. "He wasn't that punching bag he referred to. His work simply aroused suspicions which everywhere in the world would result in the resignation of a minister from his post," Andrassy said.

"At the end of the day, policy is what's important," said Matthew Vogel, a senior economist with the London branch of investment bank Merrill Lynch. "Anyway, we know that the position of Mr. Černák as Economy Minister wasn't a core one."

Ján Tóth, a senior analyst with ING Barings in Bratislava, said that market reaction would have been far stronger had Deputy Prime Minister for Economy Ivan Mikloš or Finance Minister Brigita Schmögnerová resigned, for example. "The market considers Mikloš to be the man standing behind reforms," Tóth said.

These views were supported by Kevin Leahy, international strategy manager at the American energy corporation Cinergy. "It [Černák's resignation] won't really change our view of Slovakia," said Leahy, whose firm has recently been considering investing into Slovakia's energy sector. "We're still interested in investing in Slovakia," Leahy added, explaining that Cinergy would closely monitor the government's efforts to deal with the country's structural problems.

Černák's departure came in the wake of a string of scandals that began with the botched purchase of a 45.9% stake in gas storage company Nafta Gbely four months ago. After presiding over a much-criticised tender to select a mediator to settle Russia's debt to Slovakia, as well as the embarassing loss of the state's controlling share in Priemyselná Banka, Černák faced calls even from members of his own cabinet to take responsibility for the Economy Ministry's blunders.

Černák told journalists at the October 19 press conference that he had decided to leave his post in order to protect the Economy Ministry from further accusations. He explained that the good work of the ministry was being overshadowed by "attempts [by journalists] to present ordinary events as if they were scandals. These cases cast a shadow not just on my work, but also on the positive work of the entire ministry during the past year."

Černák vowed to seek redress in the courts, saying he had submitted to his lawyer over 200 articles that had appeared in the print media, "half of which were written by two journalists." Wherever grounds existed for legal action, charges would be laid, Černák said, with any damages awarded being donated to charity.

The departing minister also gave up his seat in parliament. MP's enjoy immunity from prosecution, and Černák said he wanted people to see that he was ready to defend his actions as minister in the courts if need be.

The new Economy Minister is to be Ľubomír Harach, chairman of Černák's Democratic Union (DÚ) party and former Minister of Education during the short-lived 1994 government of Jozef Moravčík.

The nomination, which has been supported by the Coalition Council, a senior government body, raised some eyebrows among politicians who felt that Harach, an electrical engineer by training, did not have the requisite professional background for the post of Economy Minister.

Other members of the government, however, said that Harach should not be judged too early. "Let's give him a chance to show his abilities", said Béla Bugár, head of the SMK Hungarian coalition party. Harach, said Bugár, was "the managerial type," something he proved during his previous tenure as the Minister of Education.

"He had a good track record as Education Minister," agreed ING's Tóth.

Nevertheless, Černák said, he did not doubt Harach's ability to handle the job. "I think he won't need even 100 days to prove that he is able to do it," Černák said, referring to the traditional period of grace given to new ministers and governments to become accustomed to holding office.

Given the mood of other government politicians, Harach may not have even 100 days to prove his mettle. "We need a trustworthy person as Minister of Economy. Every person learns, and Harach knows what he will do. He also knows that his fingers might get burned if he doesn't succeed," said the SDĽ's Andrassy.

Černák, for his part, has said that he will return to the private sector. He has denied rumours that he will be offered the presidency of steelmaker VSŽ, but has not said what other offers he has received. "I know my price," he said. "I've got lots of offers, a lot of ideas and even more experiences."

Is Slovakia’s reputation a reflection of our own individual behaviour?

Just like in every other country, an average Slovak citizen does not have the means or power to change the dysfunctionality of the system.