Three large white males, two with shaved heads and all with tattooed knuckles, attacked a 26-year old Peruvian student October 9 in what appears to be the latest in a recent series of shocking racial beatings in the nation's capital. The latest incident occurred across the street from the Bratislava Regional Court, and provoked added outrage when police intercepted and delayed a vehicle carrying the injured victim to hospital. 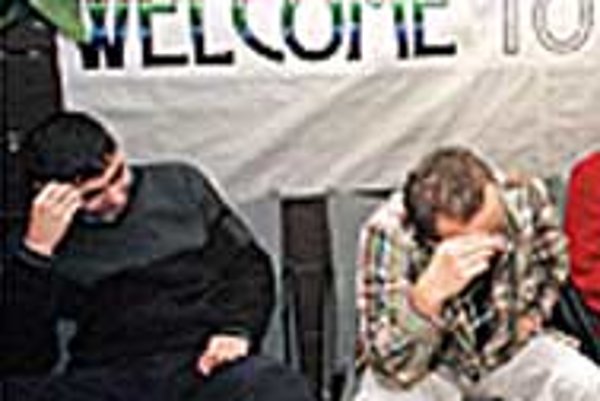 Font size:A-|A+  Comments disabled
Three large white males, two with shaved heads and all with tattooed knuckles, attacked a 26-year old Peruvian student October 9 in what appears to be the latest in a recent series of shocking racial beatings in the nation's capital. The latest incident occurred across the street from the Bratislava Regional Court, and provoked added outrage when police intercepted and delayed a vehicle carrying the injured victim to hospital.

John Sanchez Bendezu, a 26-year-old foreign student from Peru, was attacked and seriously wounded by unknown assailants at the Institute for Language and Academic Preparation for Foreign Students in Bratislava when he stepped between the attackers and their original target, a fellow student from Korea. Bendezu was later driven to hospital by his friend, but their car was stopped en route by Bratislava police near the Mlynské Nivy bus station.

The driver of the car, a doctor, said that he told the police he was taking Bendezu to hospital. Instead of offering an escort, however, as is required under Slovak law, the officer fined one of the students in the car 500 Slovak crowns, to be paid on the spot, for not having legal identification on his person. The officer later said he thought the driver was lying because the injured student was not bleeding.

Police Force President Ján Pipta acknowledged on October 11 that the policeman had acted negligently. The Interior Ministry has launched an investigation into the matter, and the officer may eventually face criminal prosecution.

Bendezu suffered a broken nose and a fractured skull (just above his right eye-socket) in the attack and had to undergo surgery for his wounds on October 11. His doctors reported the next day that the operation had been a success and that his condition was improving. School officials said that he should be released from hospital around October 17.

The incident began around midnight on Saturday, October 9 when the culprits entered the school and asked the on-duty security guard if they had any available accommodation. After being told to go to a hotel, they started harassing a Korean student sitting on the school's front steps, allegedly telling him that he was in "white Slovakia where blacks should be sent back from where they came," the press agency TASR reported.

Attempting to escape, the Korean entered the school's 'visiting room' - two metres from the guard - but the three men followed him and continued yelling obscenities. At that point, Bendezu, or 'Johnny' as he is known to his friends at the school, attempted to calm the men but was instead himself attacked.

The guard said that she saw three young men between the ages of 25 and 30 speaking to the Korean student, then follow him into the visitor's room. From her angle, however, she said she was unable to see what was happening. When they left, she said, she was unaware that an assault had occured.

Other eye-witnesses to the attack estimated that the culprit who attacked Bendezu weighed around 100 kilograms. Johnny, who weighs in at a slight 50 kilograms, initially appeared to have suffered minor facial injuries, but when he began to complain of increasing pain and swelling around his eye two hours later, his friends decided to take him to a nearby hospital.

Initial reports said that the attackers were skinheads. However, school officials said that only two of the culprits had shaved heads, while one of them had long hair bound in a ponytail. Police President Pipta also said that it was too soon to conclude that the attack had been committed by skinheads.

"The fact that the offenders had their heads shaved does not necessarily mean that they were skinheads," Pipta said October 11 at a Bratislava press conference. "Bodyguards of politicians also often have their heads shaved.

On the other hand, the fact that the attackers yelled racial slurs at the Korean student before attacking Bendezu does seem to suggest a racial motive. Jaroslav Sahul, spokesman for the police presidium, said that their investigation of the incident has been focused on local skinheads.

According to Sahul, investigators have shown the eye-witnesses photographs of all previously-arrested skinheads in Bratislava, in hopes of finding a match. No identifications have yet been made, but the police have produced composite sketches of the suspects and hope to make an arrest by October 20.

The beating follows on the heels of numerous recent racial attacks in Bratislava. In June, Libyan diplomats in Slovakia reported that two of their sons had been attacked by skinheads and that other similar attacks had occurred in January and February, 1999 on Arab students in Bratislava.

Furthermore, a Chinese diplomat in Slovakia was beaten by a gang of short-haired youths on a Bratislava bus in July, leaving him temporarily in a coma. Two British citizens of Asian origin were also attacked in July.

The fact that the attack was made on school grounds has shaken the sense of safety that students and faculty alike had shared at the Institute. "All us students have just met during the last month," said Chelly Nader, spokesman for the student body. "You have to understand, we are like a family - we eat together, we live together."

"Many students are afraid now," Nader continued. "This didn't happen outside - it happened in the school and that is very unusual. We students are not satisfied with our security here."

Róbert Povchanič, the Institute's Deputy Director, said he understood the students' concerns and shared their frustrations. He promised that added security measures would soon be added. For starters, he said, the front door of the school will be equipped with a video camera so that all visitors can be taped and questioned before being admitted.