Few banks on the Slovak market have taken as much abuse as Devín Banka in 1999. Jointly owned by Slovak and Russian interests, Devín has been described by a former Slovak intelligence agent as "the Trojan horse of Russian interests in Slovakia." After again being chosen to arrange the settlement of Russia's debt to Slovakia, Devín was accused in the media of being under the protection of the former communist SDĽ, a ruling coalition party.
And yet, Devín Banka chief Ľubomír Kanis says that the attention - however unwelcome - has actually coincided with an upturn in the bank's fortunes. 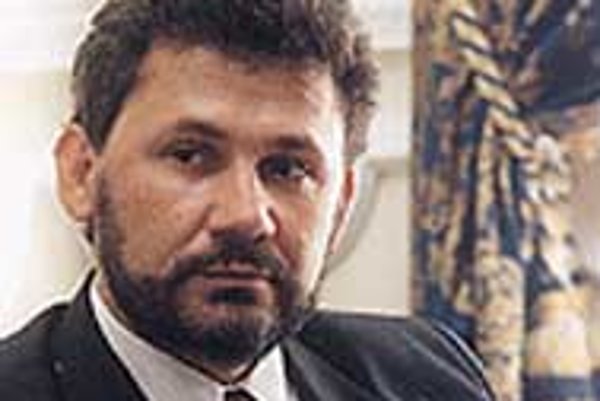 Font size:A-|A+  Comments disabled
Few banks on the Slovak market have taken as much abuse as Devín Banka in 1999. Jointly owned by Slovak and Russian interests, Devín has been described by a former Slovak intelligence agent as "the Trojan horse of Russian interests in Slovakia." After again being chosen to arrange the settlement of Russia's debt to Slovakia, Devín was accused in the media of being under the protection of the former communist SDĽ, a ruling coalition party.

And yet, Devín Banka chief Ľubomír Kanis says that the attention - however unwelcome - has actually coincided with an upturn in the bank's fortunes. The bank's pretax earnings were up 60% in the first half of 1999 to 89 million crowns ($2.2 million) compared to the same period in 1998. Total assets have more than doubled since last December to 11.1 billion crowns, while individual depositors have risen from 12,000 to over 80,000 in the same period.

"Nowadays, when we are being criticised even by representatives from the [government] Hungarian Coalition Party, we get the support of Slovak nationalists," Kanis joked in an interview with The Slovak Spectator on October 12. "But I don't care about such things. I just want to do serious banking."

Devín Banka was established in February, 1992 as an investment bank offering international payment and settlement services, above all between Slovak and Russian companies. According to the SITA news agency, Devín was partly owned by the Moscow-based Renaissance Bank as of July 1998; while Kanis would not reveal the names of Devín's Russian owners, he confirmed that Russian interests did "co-own" the bank, and said that three Russians sat on Devín Banka's top executive bodies - Sergej Gorodkov and Vladimir Romanov on the Board of Directors and Anatolij Klimenko on the Supervisory Board.

The Russian presence in Devín Banka has helped the bank fulfill its chief mission since 1995 - settling a debt of some $1.7 billion that Russia owed to Slovakia and inherited from the former Soviet Union.

Many Russian creditors have lined up at the Paris Club, a group of countries trying to obtain cash settlements of Russia's debts - according to Ivan Chodák, an analyst with CA IB Securities in Bratislava, these debts are principally Eurobonds issued by the Russian government in the 1990's.

Slovakia's debt, on the other hand, comes from the old Soviet Union and Warsaw Pact agreements rather than recent ventures into Russian investment. Like several of its central European neighbours, Slovakia decided in 1993 to accept imports of goods - chiefly Russian armaments - instead of hard cash payments on their old debts. It was in this business - arranging imports from Russian companies in co-operation with the Russian Finance Ministry - that Devín Banka's Russian contacts proved so valuable.

Devín Banka held the debt settlement contract from 1995 to the end of 1998, at which time the newly elected government of Prime Minister Mikluláš Dzurinda said it would call a tender for the contract to eliminate any room for favoritism. Debt settlement is a lucrative field of finance, with arrangers like Devín Banka making a 20% commission on the Russian import deals they close.

When Devín Banka again won the contract in July, many Slovak newspapers and politicians cried foul, saying personal contacts between the bank and the ruling coalition SDĽ party had pre-determined the outcome. But Kanis strictly denied the charges, and said that only Devín Banka had the necessary Russian contacts to manage the complicated business of debt settlement.

"We mostly deal directly with state-owned Russian companies, and politics play no role in this process," Kanis said. "I know [SDĽ leader Jozef] Migaš very well, we are old friends, but it has no impact on me as chief of Devín Banka."

Kanis explained that the debt settlement process was under immense time pressures, as Slovakia stood to lose almost six billion crowns ($150 million) in fuel imports scheduled for this year if the Slovak and Russian Finance Ministries did not come to agreement before December 31. While the recent tender process used to select Devín Banka was criticised for not allowing other interested banks enough time to bid on the contract, Kanis said that time pressures had not allowed for a longer tender process.

"I would welcome it if other banks took part in debt settlement," Kanis said. "Devín Banka will be settling some $450 million [of debt], but there is still another $750 million left. We want to fight to get this Slovak money back from Russia in co-operation with other banks, like Exim Banka."

Getting even Devín Banka's $450 million back from Russia may prove enough of a fight, however. Kanis' friend Migaš, who is also the Slovak Parliament Speaker, returned from a week-long trip to Russia on October 2 saying he had arranged a deal in which Slovakia would be sent $40 million in Russian black coal by the end of the year. Kanis, however, was not optimistic.

"I would be very happy if we were successfull in this deal. But some Slovak state officials could have worked harder this year and travelled more often to Russia than they did. We now have only two and half months left until the end of the year to meet this goal [of importing the black coal], but Devín Banka is doing everything it can," Kanis said.

Some foreign policy experts, like Slovak Foreign Policy Association analyst Alexander Duleba, have said that the Russian government is unenthusiastic about sending Slovakia fuel supplies - coal, oil and nuclear fuel - in place of the arms supplies it used to trade off against the debt. Duleba explained that until the Slovak government decided this year not to accept any more arms, Russia had used arms-for-debt shipments to keep its traditional central European export market for military hardware.

Duleba added that after Slovakia refused this summer to accept the Russian S-300 anti-missile system as a debt write-off, the Russian side lost interest in settling its debt to Slovakia. But Kanis, who studied at the same university in Kiev as Duleba, argued that the refusal of the military hardware had not affected the settlement process.

"I imagine he [Duleba] has some information to support such conclusions," Kanis said, "but I actually work in debt settlement, and I don't think Russia has anything except economic interests in running this process. Russia puts no political pressure on Slovakia to import armaments. Russia simply can't pay back its debt in cash, so we accept goods [airplanes, energy] instead."

As for being Russia's 'Trojan horse' in Slovakia, Kanis said that the metaphor was ridiculous. "I would say instead that the Trojan horse of Russian interests would be a company which tried to obstruct debt settlement," Kanis argued.