The second-place finish of the nationalistic Freedom Party in Austrian elections last week raised fears among Slovak officials that their EU hopes and other bilateral issues may be affected. As Austria's leaders begin to haggle over the composition of the next government, many Slovaks will be watching closely.
The leader of the Freedom Party, Joerg Haider, campaigned on an anti-immigrant, populist platform and won 27.2% in the October 4 vote. The Social Democrat Party, which has led the country since World War II, suffered its worst showing since 1945 with 33%. The conservative People's Party, a governing partner for the last 13 years, fell to third place with 26.9%. 200,000 mail ballots had yet to be counted when The Spectator went to press. 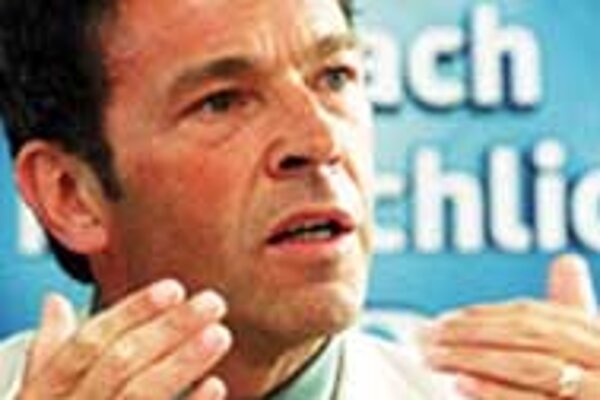 Font size:A-|A+0
The second-place finish of the nationalistic Freedom Party in Austrian elections last week raised fears among Slovak officials that their EU hopes and other bilateral issues may be affected. As Austria's leaders begin to haggle over the composition of the next government, many Slovaks will be watching closely.

The leader of the Freedom Party, Joerg Haider, campaigned on an anti-immigrant, populist platform and won 27.2% in the October 4 vote. The Social Democrat Party, which has led the country since World War II, suffered its worst showing since 1945 with 33%. The conservative People's Party, a governing partner for the last 13 years, fell to third place with 26.9%. 200,000 mail ballots had yet to be counted when The Spectator went to press.

The strong showing of the far-right Freedom Party could have implications for Slovaks on a number of levels. Thousands of Slovaks work in Austria, both legally and illegally, and thousands more regularly cross the border for other reasons. Hundreds of students take advantage of educational exchange programs every year. Any tightening of border controls, and any heightening of anti-foreigner feeling in Austria, would have devastating consequences for Slovaks who work or live there.

But the main concern sparked by Haider's strong showing is that Slovakia's drive to move quickly into EU accession talks could be slowed by increased resistance from Austrian radicals. Even the Austrian political mainstream is already at odds with Slovakia over the latter's refusal to close in the year 2000 its Russian-made Jaslovské Bohunice nuclear power plant.

In the days following the election, a number of Slovak politicians vented their concerns to the press. Peter Weiss, chairman of the Parliamentary Foreign Policy Committee, told the SITA news agency that the inclusion of Haider's nationalistic party in the Austrian government "could result in complications" for Slovakia.

Other politicians, however, predicted that the Freedom Party would be kept well out of the government and urged a wait-and-see approach.

"These election results will confirm the continuation of the government coalition as it has been in the last legislative period," said Pavol Hamžík, Deputy Prime Minister for European Integration, in an interview with The Slovak Spectator. "Internally, his (Haider's) populist statements will introduce a difficult element into Austrian politics... but I don't think he will be able to influence polices," he added.

Haider, 49, has been criticised internationally for statements which smack of Nazi-style rhetoric. Last year, he was quoted praising Hilter's "sound employment policies" and seen on video tape lauding SS veterans as "people with character." The son of a minor Nazi official, Haider has also referred to WWII concentration camps as "punishment centres" during parliamentary debates.

Even so, the telegenic leader with the perpetual suntan has managed a steady rise in popularity. Besides stoking fears that foreigners are taking Austrian jobs, his message to voters includes criticism of what he calls increasing patronage among the two ruling parties, and of business regulations which seem to favour established players.

Haider supports a radical deregulation of business and the introduction of a flat 23% tax rate. In the region of Carinthia where he is governor, he has cut electric bills and rents for his constituents.

More worrying for the average Slovak, however, is his anti-foreigner stance. At a recent political rally, he called for unemployed foreigners, including asylum seekers, to be forced to leave if they are unable to find work within three months. Sounding a bit like Slovakia's own far-right populist leader Ján Slota, he continued: "Under the Social Democrats in Vienna, it is possible for black African asylum-seekers with designer suits... to deal drugs undisturbed, while Austrian schoolchildren are forced to learn Serbo-Croat."

According to Slovak foreign policy analyst Ivo Samson, Haider's rhetoric plays on the deep-rooted fears of the Austrian population, fears which extend as far back as the Austro-Hungarian Empire. "At that time, every third person in Vienna was speaking Czech and looking for work. Haider alludes to this historical memory," Samson said.

Slovakia is a special target for hatred, both because of its proximity to Austria and its poor relations with its neighbour under the previous Mečiar administration, Samson added.

"Out of all of Austria's neighbours, relations with Slovakia have been the most problematic," he said. "Under the former [Mečiar] regime, the country's territorial integrity was breached when [the former Slovak president's son] Kováč Jr. was abducted into Austria, in an act they [Austrians] feel was orchestrated by the [Slovak] government."

The alleged 'broken promise' to close Bohunice nuclear plant by the year 2000 has also become a major issue, and was publicised widely in the last election.

"Some Slovaks have long observed that they are treated like 'dirty foreigners' in Austria, but now this has official confirmation," Samson added.

But Austrian analyst Mahr Armin, a research fellow at the Institute of the Danube Region and Central Europe, said Slovak fears of Austrian policy changes were unfounded. The Social Democrats, he predicted, would continue in coalition with the People's Party.

"We can't say today what the result will be, but I don't see any serious intent on the part of either [former government] party to form a coalition with the Freedom Party," he said, adding that save for the nuclear issue, Austria is a strong proponent for EU entry for Slovakia.

Both Hamžík and Slovak Deputy Foreign Minister Ján Figeľ said they wished to continue dialogue on the Bohunice power plant regardless of which party was in charge. "Of course we are not happy about the fact that the nuclear power plant has become a problem, but otherwise our relations with Austria are good. We want to resolve this issue, but we also want compensation and offers of help from the Austrian side. [Closing the plant earlier] has economic and social consequences for us and that should not be forgotten," said Hamžík.

Slovakia announced on September 28 that it would shut down two reactor blocks at the nuclear power plant in Jaslovské Bohunice in 2006 and 2008 respectively, dates which are acceptable to the EU but not to Austria.

Regardless of the practical implications, the rise of a far-right party in western Europe has been cause for reflection among some Slovaks, who note that their stable, wealthy neighbour to the west would soon have a government similar in structure to Slovakia's: a weakened coalition linked by a common desire to keep a charismatic populist out of power.

"This election shows Austria that these political problems we are dealing with are not just problems of transitional states," Hamžík said.