The British supermarket chain Tesco is set to open its second 'hypermarket' in Slovakia - a 7,000 square metre complex on October 12 in the eastern city of Košice. Having already opened a similar complex in the western town of Nitra in June, Tesco is in the middle of a three year expansion drive that will bring five hypermarkets - large shopping malls housing many retailers - to major Slovak cities. 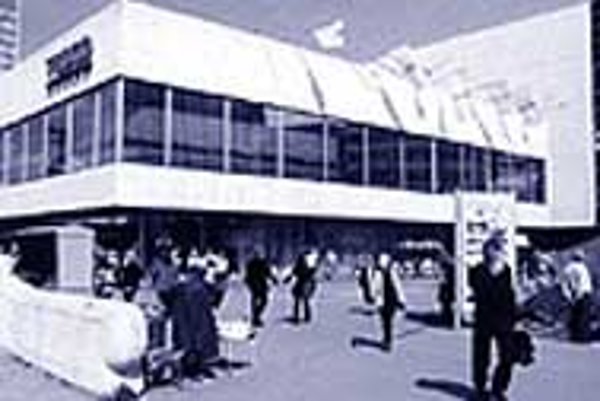 Font size:A-|A+  Comments disabled
The British supermarket chain Tesco is set to open its second 'hypermarket' in Slovakia - a 7,000 square metre complex on October 12 in the eastern city of Košice. Having already opened a similar complex in the western town of Nitra in June, Tesco is in the middle of a three year expansion drive that will bring five hypermarkets - large shopping malls housing many retailers - to major Slovak cities.

The Košice and Nitra stores will be followed next year by sites in the Lamač and Petržalka suburbs of Bratislava, in central Slovakia's Banská Bystrica and possibly in the northern city of Žilina. Company officials say that the chain has been encouraged by the Slovak public's early response to the hypermarket phenomenon. "The opening of the hypermarket in Nitra in June was a success, and it has been the same way since then," said Hanna Rydlová, marketing manager for Tesco Stores Prague, which is responsible for both the Slovak and Czech markets.

Tesco will not say how much its Slovak expansion is costing, but a report produced by Capita Beard Dove, a firm acting as cost consultants to Tesco on its hypermarket plans in the Czech and Slovak Republics, puts the value of the Tesco drive in both countries at 100 million British pounds (67 billion Slovak crowns).

The size of the investment has delighted local authorities in Slovakia. Ladislav Falat, head of the Košice City Hall Economic Development and Business Management Section, said that "the opening of the Tesco hypermarket in Košice means 500-600 new job opportunities, and it is a positive signal for other companies to establish businesses in Košice."

Falat said that Košice city officials had assisted Tesco in finding the hypermarket site, and in working through legal and construction issues.

Hypermarkets are gaining popularity worldwide as a modern way of retail shopping. The Nitra hypermarket is a typical example of a hypermarket - it has more than 7,000 square metres of retail area, and offers over 40,000 products for sale. Grocery products account for approximately 50% of the retail items on sale, while the remainder includes non-food products such as clothes, footwear, toys, electronics and sportwear.

Hypermarkets are usually located on the outskirts of large cities, the idea being to offer one-stop shopping to customers living in the city and its surroundings in a spacious retail environment with wide shopping aisles, long hours of business and extensive parking facilities.

Tesco normally sublets part of the retail area in hypermarkets that it builds to other small entrepreneurs such as restaurants, florists, dry cleaners or travel agencies. In the Nitra site, about 15% of retail space has been let to such entrepreneurs.

So far, most of Tesco's head office staff for both Slovakia and the Czech Republic has been based in Prague. Now, however, the company intends to separate these two markets and build up a team of commercial staff and buyers in Slovakia.

Since Tesco entered the Slovak market in 1996, when it bought a chain of department stores from American retailer K-Mart, its British staff has all been on short-term contracts. A few weeks ago, however, the first British ex-patriot family arrived in Slovakia to work for Tesco hypermarkets. Martin Reynolds, a former store manager from northern England, will serve as a mentor and help local managers build up the Slovak hypermarket chain.

"We have a young, very energetic management team [in Nitra] and the store is performing better than forecast," said Reynolds, adding that Tesco managers are participating in a special management training programme both locally and in the UK.

Tesco launched its central European operations in Hungary five years ago; the Czech Republic, Poland and Slovakia followed soon after. Reynolds said the task of understanding the different business environments of each country made it vital to have a local team handling each market.

Reynolds cited some big differences between the British and Slovak markets.

In the UK, he said, the system of product ordering and distribution is centralized, while in Slovakia every store has its own administration. Business is not conducted as much on computers in Slovakia as in the UK, he added, meaning a pile of paperwork equal to that faced by UK managers 20 years ago.

Reynolds admitted to some nostalgia from his time in the less high-tech Slovak system - "we've lost a lot of direct [personal] contact [in the UK]," he said - but predicted that in the long run the Slovak system will also be centralized.

Indeed, with its hypermarket concept Tesco aims to change not only the way store owners conduct business, but also the way Slovaks do their shopping. Store officials say the aim is to convince Slovaks to make all of their food purchases in one place, rather than visiting neighbourhood outlets on a daily basis.

Since Tesco entered the Slovak market, the company has been trying to strengthen its position in two ways, said marketing manager Rydlová. "[The first way is] through improvement and refurbishment of our department stores, and the second is through investments in new stores [hypermarkets]."

"There are many opportunities for retailers in the Slovak market, especially because it is not as developed as retail markets in western Europe," continued Rydlová. "For example, the average retail area per person [at Slovak stores] is still far below the EU average. There is also much room for improvement in terms of convenience, quality and choice."

The top food retailer in the UK, Tesco is quickly becoming a force on the international market as well with 821 stores in eight countries and 200,000 employees. Besides central European sites in Slovakia, the Czech Republic, Hungary and Poland, Tesco also owns stores in the Republic of Ireland, Thailand and South Korea.

"In western Europe, retailing is about how efficiently and competitively you offer your services," explained Rydlová. "In Slovakia and other central European countries the drive is also to gain a strong market share as fast as possible."