With just under three months to go before the December European Union Helsinki summit, things are looking good for Slovakia to take its place next to its Visegrad neighbors in the first round of nations being considered for accession. Diplomatic activity has been accelerated, and government officials both at home and abroad are painting Slovakia's chances in positive terms.
On September 14, Slovakia received two confirmations that its EU track efforts will be succesful. Portuguese Deputy Foreign Minister Saixas Da Costa and his UK counterpart John Kerr said separately that they believed Slovakia would be asked to join the first group. 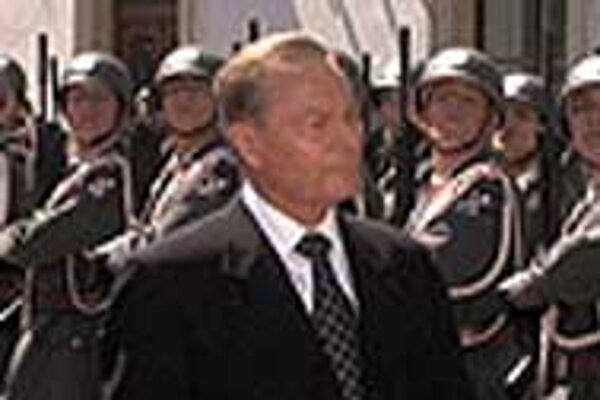 Font size:A-|A+0
With just under three months to go before the December European Union Helsinki summit, things are looking good for Slovakia to take its place next to its Visegrad neighbors in the first round of nations being considered for accession. Diplomatic activity has been accelerated, and government officials both at home and abroad are painting Slovakia's chances in positive terms.

On September 14, Slovakia received two confirmations that its EU track efforts will be succesful. Portuguese Deputy Foreign Minister Saixas Da Costa and his UK counterpart John Kerr said separately that they believed Slovakia would be asked to join the first group.

Slovak Deputy Prime Minister for European Integration Pavol Hamžík echoed their words and added on September 14, "I can't imagine any other development but Slovakia's being invited for entry talks in Helsinki." In this opinion Hamžík was supported by the international diplomat who most directly deals with EC-Slovak issues - European Comission Ambassador to Slovakia Wilhelm Rochel, who said he considers Slovakia a "natural future member of the EU."

But nothing is yet certain. The EC will make a decision on Slovakia based upon its 1999 Progress Reports, which will be published on October 13. The reports of all the possible candidates for first round accession to the EU - Slovakia, Bulgaria, Latvia, Lithuania, Romania and Malta - will contain recommendations on whether to open accession negotiations or not. Then the European Council, made up of the Prime Ministers of all the EU countries, will render a decision on each country's fate at the summit on December 10 and 11.

Slovakia has already nominated Deputy Foreign Minister Ján Figel as its chief negotiator for the EU, and has built up a negotiating team to handle the country's EU entry bid. From the technical side at least, if Slovakia is successful at Helsinki, negotiations could start soon after the summit.

The EC's Rochel told The Slovak Spectator on September 14 that while Slovakia has a great deal to accompish in the coming years to qualify for full entry, that fact should not be a deterrent. "It will be possible for a country like Slovakia, with whom negotiations may start later than with its neighbouring countries... to catch up or even overtake those countries," he said.

The list of what remains to be done, however, is rather daunting. After a meeting of the Slovak Ministerial Council for European Integration on September 14, Hamžík used a press conference to list the main areas in which Slovakia must improve if it is to win EU approval.

Slovakia, he said, must restructure its banking sector, must solidify the independence of the courts, must set a fixed timetable for the closure of the Jaslovské Bohunice nuclear power plant, must make "necessary changes" to the Slovak constitution and must adopt the conclusions of a prepared report on the situation of Romanies in Slovakia. The EU, he added, must also approve of Slovakia's economic strategy.

The Romany issue became an important one after a rash of asylum seekers motivated the UK, Finland and Norway to impose temporary visa regimes on Slovakia over the past year. But after the fifth and final meeting of the pre-Helskini EC-Slovak working group from September 8-9, the group's co-chairman, Francois Lamouereux, said that he didn't think this issue would be a barrier to Slovakia on its path towards the EU.

The nuclear question, however, may prove far thornier. Slovakia currently has two working nuclear power plants: Jaslovské Bohunice in western Slovakia and Mochovce in central Slovakia. The older Bohunice plant, which has two Soviet-type VVER 440 reactors, has become the focus of a conflict with neighbouring Austria, which has threatened to refuse to support Slovakia's EU bid until it shuts down the Bohunice reactors.

The Austrians have been supported by other European officials such as Eurocrat Lamouereux, who said he does not think Slovakia could become a member of European Union without closing the V1 and V2 reactors at Bohunice. "The European Comission doesn't believe it's possible to modernize these reactors. It's time to make a political decision," he said at a September 8 press conference.

The Slovak government, which came to power on a tide of Euro-optimism in 1998, promised in October last year during Dzurinda's visit to Brussels that the problematic Bohunice reactors would be shut in 2000. This promise has not been mentioned in recent months, however.

Instead, Hamžík, Lamoureux's working group partner on the Slovak side, has said that Slovakia will only close the reactors if it gets a guarantee of early EU entry and financial compensation. If these are not forthcoming, he said, the V1 may be decommissioned in 2008 as planned, and the V2 in 2010.

Whether Slovakia will get any guarantees for backing down on Bohunice depends very much on how other EU member countries besides Austria view Slovakia's nuclear programme. Austria is a nuclear-free country, and its passionately green population makes it unlikely that Chancellor Viktor Klima will back down on his hard line stance. In France, on the other hand, nuclear plants generate close to 80% of the country's energy.

Germany, too, sees nuclear issues through different glasses. Christian Schmidt, a member of the German-Slovak Parliamentary Group, expressed "wonder" about the statement of Francois Lamouereux for the SITA press agency on September 9 after meeting Deputy Prime Minister Hamžík.

Media pundits are also lining up to support Slovakia's candidacy. The German Stuttgarter Zeitung (SZ) on September 6 published an article touting Slovakia as a sure candidate for up-grading of its EU status. Berliner Zeitung (BZ) on the same day compared the case of Romania, which has strong French backing but is in dreadful economic shape.

Respected French political analyst Jacques Rupnik, who was born in the Czech Republic, is also a booster of Slovakia's chances, saying he fears the Czech Republic may actually demoted from the first group of EU accession countries to the second because of the Czech government has become lazy about reform on its way towards the EU. "I can imagine Slovakia might catch up and even overtake Czech Republic," Rupnik told the Czech daily Lidové Noviny September 6.