Youth drug use rising since 1989

One early morning in the centre of Bratislava, a group of teenagers run down the street carrying a television set. Five car windows nearby are broken, the car radios missing. The word on the street is that a new shipment of heroin has arrived.
That day, business is brisk in Bratislava's pawnshops. Pavol, an 18 year-old from the Bratislava suburb of Dúbravka, walks in one shop to sell a hot pot from his mother's kitchen for the second time this month. She will be upset, but Pavol doesn't mind. In the evenings, he is only allowed to stay in the kitchen, because his mother, who has a job and two other children, has locked the valuable household equipment away in the other rooms. 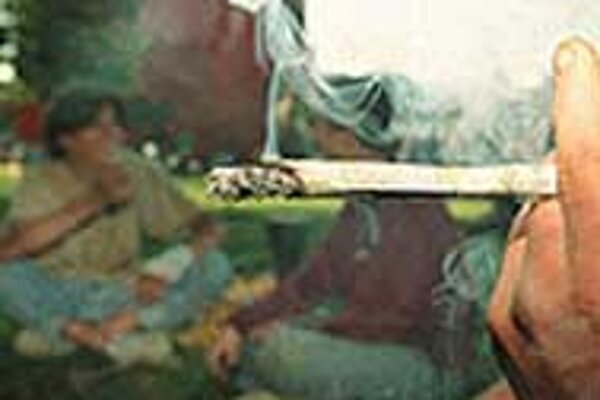 Font size:A-|A+  Comments disabled
One early morning in the centre of Bratislava, a group of teenagers run down the street carrying a television set. Five car windows nearby are broken, the car radios missing. The word on the street is that a new shipment of heroin has arrived.

That day, business is brisk in Bratislava's pawnshops. Pavol, an 18 year-old from the Bratislava suburb of Dúbravka, walks in one shop to sell a hot pot from his mother's kitchen for the second time this month. She will be upset, but Pavol doesn't mind. In the evenings, he is only allowed to stay in the kitchen, because his mother, who has a job and two other children, has locked the valuable household equipment away in the other rooms.

Though smart, Pavol dropped out of school two years ago. He met some friends and spent a winter on the streets asking people for money to buy heroin. His life now is led according to the rhythms of addiction; his first goal of the day is to get at least 300 Slovak crowns ($7) for the morning hit. For that price he can buy a small bag of marijuana which is commonly grown in hidden gardens in villages near Bratislava. Heroin is a luxury at 2,000 crowns for about a gram.

Pavol is leading a whole new kind of Slovak lifestyle. While drug addiction was not unheard of before the Velvet Revolution, it is taking on broader proportions as use shifts from glue sniffing and home-made kitchen concoctions to a wider variety of western drugs. Bratislava, and in particular the Petržalka suburb, with its convenient location near the border of Austria and Hungary, has become the centre of Slovakia's drug trade and a magnet for drug users. Ten years after the collapse of the Iron Curtain, social upheaval and easier access to drugs have created a booming market for narcotics.

Even before the revolution, some people in the former Czechoslovakia were ready to take or sniff any intoxicating susbtance available, said Ivan Novotný, Director of the private Sanatórium AT drug treatment centre in Bratislava. In the past, inhalants like alnagon and toluene were commonly used, and those with a taste for something harder turned to Czechoslovakia's substitute for heroin - pervitin, a home-made synthetic drug.

But in 1993-1994, according to figures compiled by the state-run National Centre of Health Support, people started to take more heroin. In 1996, the problem began to spread from Bratislava to the rest of Slovakia. Now, in the first half of 1999, Slovak health institutions are treating 1,552 drug addicts, and 462 additional patients have made initial contacts with treatment centres. In all of 1994, 1,189 patients were treated, according to the National Health Support Centre.

Marijuana has become the most commonly used illegal drug, to the point that Novotný estimates 68% of the Slovak population has had some contact with it. In villages around Bratislava, many new cars and house reconstructions are funded by drug sales. As possession and use of any amount of marijuana is illegal according to the Slovak drug law passed in 1995, a large portion of the Slovak population has become de facto criminals, Novotný said.

Sociologically, the rise of drug use can be tied to many factors. For one, falling living standards mean that parents have to work longer hours, and are unable to spend much time with their children. A rise in the number of broken homes is also a factor, doctors say, adding that many young users come from divorced parents.

Another major reason is the Slovak public's tolerance for other, legal forms of addiction. "Today, parents use alcohol, tobacco and caffeine and the children use marijuana and heroin. People despise abstinence... people who don't drink are not accepted," Novotný said.

To deal with this problem, Novotný tries to include the parents of drug addicts in counselling sessions. But he encounters stiff resistance, he said, to the idea that alcohol and tobacco are gateways to harder drugs. "Parents, teachers and children are not prepared for the drug problem, and their attitude is 'I don't care,'" he said.

As drug use rises, the patients being brought into treatment centres are also getting younger. According to state figures, in 1998 the largest group of drug users was between 20 and 24 years old. Daniela Cymbalová, deputy director of the Centre for Treatment of Drug Dependencies on Hraničná Street in Bratislava, said that her youngest patient was nine years old.

Unemployment is also a factor, with 57% of treated drug addicts in 1998 unemployed, 21% with jobs and 15% registered as students. As addiction grows, related problems are also developing, such as diseases like hepatitis, illness among those who have taken heroin mixed with other substances - like rat poison - and the growing incidence of AIDS. Hraničná has four HIV positive patients.

The hospital at Hraničná was opened as an anti-drug health institution in 1992, and is financed by the Health Ministry. Patient care is paid for by the nation's health insurance companies. The patients commit themselves voluntarily, and almost all are between 18 and 22 years old. Hraničná, which is the largest centre of its kind in Slovakia, also runs the nation's first free needle exchange facility to reduce the risk of AIDS among heroin addicts. Its methadone clinic has treated 130 addicts.

As opposed to a state hospital, Novotný's private Sanatórium AT, founded in 1996 at Osuského Street in Petržalka, is financed by health insurance companies, individual supporters and the parents of young drug users. This year, it also received assistance from the state Anti-Drug Fund (Protidrogový fond) and the Ministry of Labour and Social Affairs.

Along with in-patient treatments, the centre organises support groups for youth and their parents, camps and ski trips to aid in recovery, and tries to help clean patients find work or get into school. The hospital is also able to treat English speakers.

One of the more interesting NGOs which offers support is the Protidrogové fórum (Anti-Drug Forum) in Petržalka, founded in 1996 by Ladislav Snopko, a former Culture Minister who is now the director of the Zrkadlový háj House of Culture in Petržalka. He and various drug treatment professionals run monthly discussion evenings where the public can meet recovering drug addicts.

"Petržalka can't solve the problem of drugs by itself," Snopko said.

Snopko also helped to publish a book of poetry called "The Dream of My Life" by recovering addict Daniela Vávrová, 21. (Last year, 74% of registered drug addicts were men and 26% were women.) In the book, Vávrová writes about how her generation of drug users was "free"; how they wanted to live like hippies had in the 1960's.

At the age of 13, she writes, it had been "cool" to meet her friends in front of the Presidential Palace, to smoke joints at the U-CLUB under the Bratislava Castle, and to get high by the Slavín monument. A flirtation with heroin in 1994 landed her in the Psychiatric Hospital in Pezinok. Now clean, she travels. Her last contact with Snopko was from Venice, Italy.

Her book, which explores reasons for heroin addiction, opens with the question "Why?" Her answer is, "Because I am only a human being."