František Mojžiš, the head and former owner of the car leasing, sales, retail and prefab housing empire Drukos, has set out on a mission to lead the Slovak people out of poverty. Amid a fanfare of country-wide paid advertising, Mojžiš launched a privatization project last week which promises both to double investors' deposits and to keep 'strategic' assets in Slovak hands.
The ambitious scheme, entitled "Your Wave of Privatization" (Vaša vlna privatizácie), aims to bring together at least 40 billion crowns ($952 million) of citizens' savings to buy shares in several of the major state-owned institutions slated for privatisation by Prime Minister Mikuláš Dzurinda cabinet. To gather the investment, Mojžiš will have to convince pensioners, workers and other citizens that his cause is a sound investment. 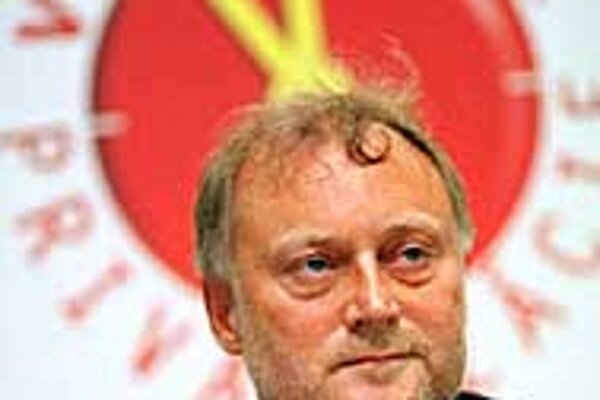 Font size:A-|A+0
František Mojžiš, the head and former owner of the car leasing, sales, retail and prefab housing empire Drukos, has set out on a mission to lead the Slovak people out of poverty. Amid a fanfare of country-wide paid advertising, Mojžiš launched a privatization project last week which promises both to double investors' deposits and to keep 'strategic' assets in Slovak hands.

The ambitious scheme, entitled "Your Wave of Privatization" (Vaša vlna privatizácie), aims to bring together at least 40 billion crowns ($952 million) of citizens' savings to buy shares in several of the major state-owned institutions slated for privatisation by Prime Minister Mikuláš Dzurinda cabinet. To gather the investment, Mojžiš will have to convince pensioners, workers and other citizens that his cause is a sound investment.

Styling himself as a kind of economic saviour, Mojžiš, whose last name is Slovak for Moses, proclaimed at a September 7 news conference that his scheme is not for personal gain, but to help the economy by keeping key companies out of foreign hands.

"We want to live here, we do not want this country to commit mass economic suicide, and something needs to be done about that. This project will not solve everything, but it can help us rebound from the bottom and put the situation in reverse," Mojžiš said. Ownership of key assets by Slovak citizens, he added, would prevent Slovakia from becoming an exporter of cheap products produced by foreign-owned companies.

Just as his company Drukos found success, Mojžiš said his new initiative will make strategic Slovak companies prosper, will make their shareholders rich, will boost small and medium-sized enterprises, and will reduce unemployment in the country.

Mojžiš's announcement immediately stirred controversy, eliciting responses ranging from caution to scepticism from government officials and local commentators. While some said they thought the idea of citizen ownership was positive, others said the scheme left too many questions unanswered, and feared naive investors could end up losing their money.

At this point, not even the government knows how or when the so-called 'strategic' Slovak companies - utilities and state firms deemed crucial to the economy under a 1995 law - will be privatised, or if an investment group like VVP would be invited to buy a major share in them.

Parliament is currently debating a government bill to allow the privatisation of most of the 'strategic' companies that remain in state hands. Last week, Deputy Prime Minister for Economy Ivan Mikloš warned that Mojžiš's association may not be able to get its hands on the shares it wants because price may not be the only criteria used in selecting buyers for strategic companies.

How risky the scheme is remains difficult to say, though a fast profit is clearly not a certainty. A careful reading of the contract which must be signed by the investor shows that the 100% yield promised will be delivered only one year after the actual privatization of a strategic company takes place. Finance Minister Brigita Schmögnerová has said that the privatisation of strategic companies will likely take a few years.

Once people commit their money, the contract says they can get it back at any time, provided they waive any accrued interest. But if Mojžiš's company goes bankrupt, however, the terms of the contract may not help investors recover their funds.

The contract also says that money collected from citizens can, before any companies are privatised, be invested "in other safe ways, which bring profit." Mojžiš has said he would not use the money for Drukos's other activities, but no clause stating that could be found in a copy of the agreement obtained by The Slovak Spectator.

Citizens' deposits are guaranteed by Drukos itself, but the company's actual financial shape is not known to the public, as it is not publicly traded and thus is not subject to any disclosure rules. Mojžiš says the key guarantee of investors' deposits lies in "transparency and public scrutiny." He called on journalists, potential investors, Finance Minister Schmögnerová and Transparency International, an international corruption watchdog, to supervise the project.

Schmögnerová, for her part, warned that money out into the venture would not be guaranteed by the state. "The state guarantees deposits in banks but not in other institutions. Citizens should be aware of the risks associated with investing in such institutions," she said. Economy Minister Ľudovít Černák, whose ministry controls the country's gas and electricity monopolies, said he saw the initiative as well intentioned, but lacking the financial resources needed to privatise monopolies.

Mojžiš believes public pressure from the association's members will convince politicians to let them in on the privatization game. "Can they, if enough people get involved - and it seems they will - behave according to anything else but the citizens' will and desires?" he asked. "This plan keeps solves the [problems of the] past, since [these companies] were built by our parents, grandparents and us, and it solves the [issues of the] future, in that our economy's backbone remains in our hands... If any other project wins... there are legal means that we can use."

This is not Mojžiš's first foray into investment promising high gains. Aside from leasing, selling and servicing cars, selling and leasing electronic equipment and prefabricated houses, an arm of the company called Drukos Výnos (Drukos Yield) takes deposits from citizens and has to date successfully brought in guaranteed yields of around 30%, almost twice what local banks offer on time deposits.

But this effort received some bad press recently when the National Bank of Slovakia included Drukos Výnos on a list of non-financial institutions in which deposits do not bear any state guarantees. The list featured a number of recently bankrupted institutions which had also promised sizeable yields, such as Nick Finance or Alegro. After the list was published, Mojžiš threatened legal action.

Interestingly, Drukos, a company with some 4 billion crowns in annual sales, is no longer owned by Mojžiš, but by the Catholic Church. Mojžíš, a former fruit and vegetable salesman under communism, turned over the ownership of his firm to the Church two years ago, supposedly to protect the company from racketeers who were trying to extort money from him. He draws a salary from the company, and continues to have full executive control over operations. The church has not commented on the new VVP venture.