Restructuring laws to do "minimum necessary"

As far back as June, Deputy Prime Minister for Economy Ivan Mikloš was saying that a government plan to restructure Slovakia's corporate and banking sectors would play "a dominant role in the Slovak economy."
This restructuring programme was finally approved by cabinet on August 25. The Slovak Spectator discussed its main features on September 6 with Katarína Mathernová, an economic advisor to Mikloš who used to work with the World Bank. 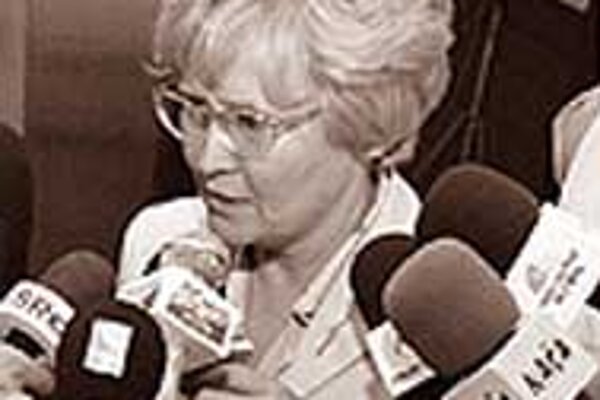 Font size:A-|A+  Comments disabled
As far back as June, Deputy Prime Minister for Economy Ivan Mikloš was saying that a government plan to restructure Slovakia's corporate and banking sectors would play "a dominant role in the Slovak economy."

This restructuring programme was finally approved by cabinet on August 25. The Slovak Spectator discussed its main features on September 6 with Katarína Mathernová, an economic advisor to Mikloš who used to work with the World Bank.

The Slovak Spectator (TSS): Why do we need to have banks restructured?

Katarína Mathernová (KM): We need to restructure banks so they can fulfil their main role of allocating credits. At the moment you don't have access to credits because the banks have no resources to lend. Finances are frozen.

TSS: The banks have been in trouble for a long time. Why has it taken until 1999 to take this step?

KM: Because of the extremely irresponsible and criminal behaviour of the previous government. In the economic sphere, they devoted their time to divvying up companies among their party loyals, but they did not take any restructuring steps. A lot of the owners of companies, who gained their properties through privatisation, were just stripping assets - this so-called "tunnelling" - so the necessary micro-adjustments did not take place.

As far as the banks are concerned, they were used by the former government as vehicles for party loyals to give loans to other party loyals - giving credits where normal, responsible banks would not have given credits because they clearly were not going to be given back. You had bank officers who were skimming off a percentage of the loans they were giving. You had a situation here which was compounding both on the banking and the enterprise side.

There is another element to all of this, and that was the incredibly fast expansion in public finances, where the state was borrowing to finance all kinds of overblown infrastructure projects and its reform of public administration, and in the process was taking resources away from the enterprise sector.

That's partly why Poland and Hungary are so far ahead of us on this. They had a similar bad loan portfolio ratio seven years ago. The situation we are in now is not unprecedented. It happened in every post-communist country, but unfortunately we lost five years in dealing with the issue.

TSS: How will the bank restructuring programme be paid for?

KM: On the direct financial side, a bond issue will be necessary. This is just a proxy for fiscal support. We will also get some support from the NBS.

Other support will come in the context of an EFSAL loan - an Enterprise and Financial Sector Adjustment Loan - issued by the World Bank. Adjustment loans are fast-disbursing, conditionality-driven loans. At the end of our mutual consultation process, they'll put down a set of conditions we need to follow in the financial and enterprise sector. Once these are approved, they will give us a straight budgetary-support loan. But here, the process of the loan's preparation, where the bank critiques the plan, is much more important than the end result, which is likely to be a loan of $150 to $200 million. It's a significant figure, but small compared to the country's financing needs.

It is important to stress that the bank restructuring process will not be paid for by a World Bank loan. That is a myth that has been created in everybody's mind. Rather, the whole process was designed in co-operation with the World Bank, which really sent a top team to deal with this issue, and which has dealt with similar issues in every post-communist country.

TSS: Which foreign banks do you hope to attract to the Slovak banking sector?

I personally think the only way to create a sustainable banking atmosphere here, where the banks will be able to lend to the enterprise sector, is to bring in top world banks. We need strong capital, managerial know-how and access to the world financial community.

KM: They are so closely connected that you can't really speak of one without the other. For example, the legislative reforms that we want to make speak about restructuring enterprises in such a way that banks would begin to play a much more significant role than so far.

A good example of what we are planning is what has been happening with [eastern Slovak steelmaker] VSŽ [which last fall defaulted on a $35 million loan and has since been put under a management team acceptable to VSŽ's creditor banks - ed. note]. What happened at VSŽ was extra-legal, if you like. This term normally has a bad connotation, but here it doesn't, because what happened at VSŽ is something we'd like to see happen in other cases.

If VSŽ had been taken to bankruptcy court [when it defaulted on the $35 million Merrill Lynch loan last October], the company could have been shut down. This would have started a process of liquidating its assets, which are minor compared to what the company can produce as a viable enterprise. But VSŽ's main creditors are western banks, who knew it was in their best interests to keep the enterprise growing.

What happened with VSŽ is something we want to have embodied in Slovak legislation. The VSŽ situation has many political connotations, but if you subtract all the political intrigue, then you have a situation where a management team was put there by the banks. You have the state as a major creditor, you have the company management itself, and the owners. As far as agreement on what to repay when, how to infuse new money and how to secure that money, it's simply a process of debt restructuring, while at the same time the new management goes about operational restructuring - selling Sparta Praha and concentrating on core business etc.

Unfortunately, this entire process was complicated by the owners - Mr. [former VSŽ President Alexander] Rezeš and company. This is something that will have to change in the new legislation. If you bring a company into bankruptcy, of course you don't lose your property rights. But in accordance with similar legislation in Great Britian and the United States, you should stop having a voice in what is happening in the restructuring process. You keep your stock, but it's valueless if you're in bankruptcy. The real economic owners are the creditors, and they should be the ones who call the shots. This is not possible under the Commercial Code as it stands, because every major move has to go through general shareholders' meetings.

The second major change, besides those to the Commercial Code, the Civil Code and the Labour Code, is to unblock financial flows. One of the key ideas is to considerably increase the role of creditors as well as their power during the bankruptcy process and restructuring. We have to reform the tax laws in such a way that they will give incentives to restructuring. Right now, creditors must pay tax on interest on unrecoverable loans. If I lend you money at 20% per annum, and you don't pay that money back, I am still taxed as if I had made that interest.

The state also currently has the right to move ahead of creditors in recovering obligations. They really should be put at the same level as other creditors.

In the procedural sense, the actual [bankruptcy] process right now is driven by administrators - those who officially put companies into receivership. Creditors have to be able to hire and fire these people. Otherwise you have receiverships called just for the purpose of acquiring a company's assets cheaply.

If an enterprise is dead, then let's get rid of it. This is part of strengthening the liquidation track and making it a credible threat. Let's not beat a dead horse - let's just get rid of it. But if an enterprise is viable, but simply has cashflow or liquidity problems, then let's work out a deal to keep it, because then creditors in the long run will get back all or most of their claims.

Regarding the tax treatment of provisions and loan write-downs, there is currently no incentive in the system to write-down loans. VUB, for example, has no incentive to take 40 cents on the dollar from a debtor because it is taxed as if it got back the dollar. If they could deduct the loss, however, they might have an incentive to bargain.

The tax law changes and alterations to the bankruptcy law will be part of a package of changes to take effect January 1 - that's the target date. They will be part of a complex of changes that aren't going to be perfect - you can't change 17 laws perfectly in four months - but which are designed to do the minimum necessary to unblock the system.

The challenge will be the institutional back-up for all of this; the courts, the administrators, people who have to educated about the changes. I think a myth has been created that "Oh, good, we're not going to liquidate, we're going to restructure everything." You never restructure everything, and a lot of the loss-makers in this country really should be dead. This is only going to address a percentage of cases. It would, for example, have been a great shame to close down VSŽ, and by the same logic, it would be a shame to lose other viable enterprises.