President says no to referendum

Infuriating the political opposition, President Rudolf Schuster announced August 24 that he would not call a referendum on the Law on Minority Language Use or on large-scale privatisation as requested in a petition signed by hundreds of thousands of Slovaks.
More than 447,000 signatures were collected for the petition, which was organized by the Movement for a Democratic Slovakia (HZDS). But despite the strong support, Schuster decided that the requested referendum, which could have reversed the minority language law passed on June 1 by parliament, went against the Slovak constitution.
According to Slovak law, only the president has the right to announce a referendum. 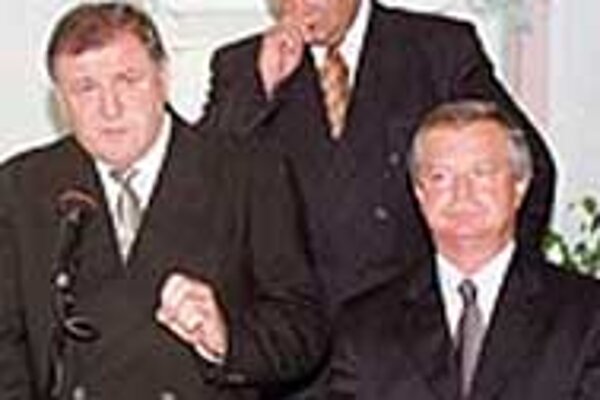 Font size:A-|A+0
Infuriating the political opposition, President Rudolf Schuster announced August 24 that he would not call a referendum on the Law on Minority Language Use or on large-scale privatisation as requested in a petition signed by hundreds of thousands of Slovaks.

More than 447,000 signatures were collected for the petition, which was organized by the Movement for a Democratic Slovakia (HZDS). But despite the strong support, Schuster decided that the requested referendum, which could have reversed the minority language law passed on June 1 by parliament, went against the Slovak constitution.

According to Slovak law, only the president has the right to announce a referendum.

The president said that he had based his decision on six independent opinions from legal and constitutional experts, five of which advised that the referendum not be held. One of the experts against the plebiscite, he said, was OSCE High Commissioner for Human Rights Max Van der Stoel. The analyst in favor, he added, was a member of the HZDS.

Schuster's decision met with an outcry from HZDS and Slovak National Party (SNS) opposition members. Former prime minister and chairman of the HZDS Vladimír Mečiar said that Schuster had ignored the voice of over 400,000 people, and warned that "other forms of protest" would follow.

"I'm sorry that Mr. President has decided this way, because this puts him in a light he didn't have to be in," Mečiar said after Schuster's announcement.

"The basic democratic principles of the state have been violated and citizens have been robbed of their right to make their own choice," HZDS parliamentary caucus chairman Tibor Cabaj added later in parliament.

But Prime Minister Mikuláš Dzurinda and other government members expressed support for the President's verdict. "In my opinion he [Schuster] made the right decision," Dzurinda said.

In discussing why he felt the referendum should not be held, Schuster said the legal analysts he consulted objected almost unanimously to the wording of the two referendum questions. In addition, he said the plebiscite would violate a pillar of the Slovak constitution, one which states that issues concerning basic human rights and civic freedoms cannot be the subject of a referendum.

The first proposed question - "Do you agree that the Slovak language should be used exclusively in official contacts as it was before June 1, 1999?" is anti-constitutional and does not refer to real facts, the referendum's opponents said.

According to Lájos Mészáros, deputy for the ruling coalition Hungarian SMK party, questioning the language law infringes on basic minority rights. The wording of the question, he added, is technically inaccurate, as in some circumstances minority languages were permitted in official contacts before June.

"The question is not a valid one, because even before June 1, 1999, minority languages were used in official contacts when, for example, schools in southern Slovakia issued bilingual school report cards. It's beyond question that bilingual report cards are official documents," Mészáros explained.

The second part of the referendum asked voters to decide whether or not the largest state companies in Slovakia should be privatised or remain in state hands. The list of state-owned firms which followed - and which the current government is intent on selling - included such giants as natural gas utility Slovenský plynárenský priemysel (SPP), energy utility Slovenské Elektrárne (SE), Slovak Post (SP), Slovak Rail (ŽSR), Slovak Telecom (ST), and banks like VÚB, SLSP, Bank Slovakia and IRB.

These companies are all protected from sale by the so-called "Strategic Companies Law," passed by the Mečiar government in 1995. The intent of that law was to prevent the privatisation of state firms deemed to be crucial to the national economy.

The current government is trying to abolish the 1995 law, as well as to rewrite the Law on Large Scale Privatisation, over the objections of the opposition and the former communist SDĽ party, a ruling coalition member.

"It is absolutely needless," said Vladimír Zlacky, a former advisor to Deputy Prime Minister for Economy Ivan Mikloš, of the law. "In the civilised world, the question of whether the state should keep a share in energy firms or telecom and financial insitutions has been solved in theory and in practice. In Slovakia, this discussion is ongoing, both in the government and the opposition."

The refusal to hold a referendum on the strategic companies question, however, was largely a secondary issue, Schuster said. Though some of the analysts he consulted said such a referendum might be legal, the HZDS had ruled it out by tying it to a language law question which was unconstitutional,.

Another problem, according to the statement, was that the strategic companies question was almost identical to one asked in a referendum on the privatization of state monopolies called by the Mečiar government in September, 1998. According to the constitution, two referenda on the same subject cannot be held within three years of each other.

A few hours after Schuster announced that he would not call the plebiscite, the HZDS and SNS deputies walked out of a parliamentary session in protest. Members of parliament had returned to work that very day after a two-month summer break.

Though nearly half a million signatures appeared on the petition, 65,294 were declared invalid after a government analysis. Officially, 381,529 signatures were recognised.