Standing motionless in the sunlight at the entrance gate of one of Bratislava's military bases, 19-year old Richard salutes an officer leaving the base. As soon as the officer passes by, the conscript raises the middle finger of his right hand, glancing around to make sure he wasn't seen.
"I hate the army," he later tells The Slovak Spectator in a short interview. "My father had to ask his friends at military headquarters to post me here so that I would get my service over as soon as possible. If I had known what it would be like, I'd have done my best not to come here at all." 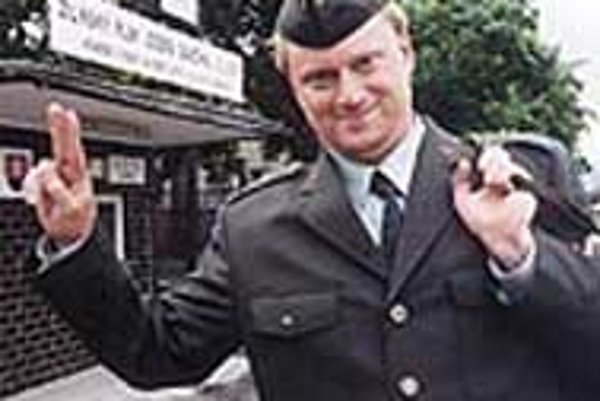 Font size:A-|A+  Comments disabled
Standing motionless in the sunlight at the entrance gate of one of Bratislava's military bases, 19-year old Richard salutes an officer leaving the base. As soon as the officer passes by, the conscript raises the middle finger of his right hand, glancing around to make sure he wasn't seen.

"I hate the army," he later tells The Slovak Spectator in a short interview. "My father had to ask his friends at military headquarters to post me here so that I would get my service over as soon as possible. If I had known what it would be like, I'd have done my best not to come here at all."

The reason that Richard was so eager to get into the army was that without the year-long service complete it was difficult for him to find a job. Employers, he explained, are reluctant to hire young men who may be summoned away at any time to do their duty. "No one would employ me without it. The first thing employers ask you about is your professional skills, the second is whether you have the service completed," he said.

Richard's story is not rare among young Slovak men, who, according to the law, are obliged to do one-year of service in the army or two years of service in the public sector, where they work for minimum wage in a state facility such as a hospital or a government office.

Since 1993, however, the cash-strapped Slovak Army has not been able to afford to place all young men who reach the age of 18 in the army and let them fulfil their "commitment to the state." As a result, the legal obligation of army service hangs over the heads of some men up to age 32. A significant number of men, hoping for a change in the law, try to evade conscription as long as possible, or try to bribe or lie their way out of service altogether.

According to statistics provided by the Defence Ministry, in 1999 over 28,000 conscripts are scheduled to be inducted into the army, while another 15,300 recruits will have to wait until they are called to complete their service.

Military officials said the delay could have been reduced this year, as an amendment to the Defence Law was on the government's list of planned changes. That law would have shortened the length of service to nine months.

But it seems now that if change comes, it will not arrive for several years. Pavol Bednár, deputy director of the armed forces placement division, told the newspaper Pravda that the cabinet's Legislative Council had withdrawn the Defence Law amendment in June and postponed its approval until 2001.

One common complaint among men who enter the Slovak army is that it is a waste of time. They claim the bases are extremely disorganised, the living conditions are bad, and say there is not enough money to buy equipment or properly train the soldiers. People with special talents, such as engineers and artists, say they are often not given the chance to use them in the army.

Losing the chance to earn money, however, appears to be the main reason why young men attempt to remain in civilian clothes. In the army, most conscripts earn between 400 to 600 Slovak crowns ($9-14) per month, depending on their rank. As the estimated average salary in Slovakia is approximately 11,000 crowns per month, about 125,000 crowns is lost in a year spent in the barracks.

Bribery is one way to avoid the rank and file, and young men say it is relatively common despite the risk of imprisonment if they are caught. Paying off doctors and officals to get a medical excuse, called in Slovak a "blue book," is said to be one of the most common methods.

"It cost me over 35,000 [Slovak] crowns to pay several people to get me the blue book," said Róbert, a 27-year old university graduate who did not want his last name published. "It's a lot of money, but it's worth it. It's still less than what I would lose spending one year in the army."

Marián M., a 26-year old journalist from Bratislava, has managed to avoid going to the military so far, but he is constantly worried about the six years ahead in which he is still eligible to be called to serve.

"What will I learn there? To use a rifle?," Marián asked, calling the army "a total waste of time. I'd rather keep working and pay taxes and live as a human being than listen to someone's stupid orders and eat out of 'ešus' [aluminium trays used in the army]," he said.

Marián had been enlisted after finishing high school, but was given a deferment to attend university. After completing his five-year course, he tried to avoid service by postponing his final exams. Two years later, he was finally forced by the university to complete his degree. "I'll do anything to stay out of the army," he said.

Draft dodgers are not the only one who complain that army service obligations are unfair. Some men in their 20's who don't want to fight end up in the army anyway because they missed the deadline to apply for the civil service when they were younger. Soldier Daniel Borský, for example, made the front pages of Slovak newspapers this April when he refused to sign an oath stating he would lay down his life for his country.

Claiming he was a pacifist, Borský refused to fulfil his army duties. As a result, he was convicted of breaking military law. After a short time, however, Borský decided to start following orders after all, and the prosecutor withdrew the lawsuit.

"I wasn't ready or willing to lay down my life for any state in the world," said Borský, 28, who will get out of the army at the end of August because he has just become a father (the army allows conscripts to serve only five months if they have children). Borský said he had missed the civil service application deadline because he had been out of the country.

Borský was never made to sign the oath, which states that a man is willing to "lay down his life in the name of the freedom, sovereignty and territorial integrity of the Slovak Republic." Instead, he was placed on restricted duty.

But army officials did not encourage other soldiers to follow Borský's path in the hopes of an easier time in the service.

"His case was an exception," said Jozef Vook, chief of the military prosecutor's office at the army's General Staff. "Mr. Borský had a chance to do the public service instead of coming to the army. But he came, so his refusal to fulfil duties can only be seen as an example of deceit."