Telecom Minister Gabriel Palacka resigned "with a clean conscience" on August 8, finally succumbing after weeks of intense political and media pressure. Palacka had been the target of corruption allegations over his role in such cases as the selection of a privatisation advisor for the state-run telecom monopoly Slovenské Telekomunikácie (ST).
"In the past few weeks, I have been forced to spend most of my time and energy in countering various attacks and unfounded accusations," Palacka said at a news conference the day he resigned. "Under such conditions it is not possible to lead the ministry responsibly, and concentrate on solving its problems." 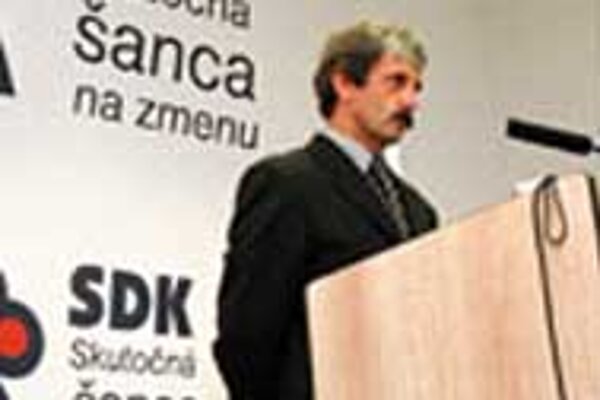 Font size:A-|A+  Comments disabled
Telecom Minister Gabriel Palacka resigned "with a clean conscience" on August 8, finally succumbing after weeks of intense political and media pressure. Palacka had been the target of corruption allegations over his role in such cases as the selection of a privatisation advisor for the state-run telecom monopoly Slovenské Telekomunikácie (ST).

"In the past few weeks, I have been forced to spend most of my time and energy in countering various attacks and unfounded accusations," Palacka said at a news conference the day he resigned. "Under such conditions it is not possible to lead the ministry responsibly, and concentrate on solving its problems."

Prime Minister Mikuláš Dzurinda, who angrily accused some members of his own SDK party of having forced Palacka's departure, said that he was "saddened" by his telecom Minister's decision, but added that "Mr. Palacka still has my full political and professional support."

Pressure on Palacka to resign reached new heights on July 26 when a cabinet investigation concluded that the Telecom Ministry had violated the Commercial Code in awarding the ST advisory tender to a consortium comprising Deutsche Bank, financial analysts Slávia Capital and Wood & Comp., and legal advisors White & Case.

The law, investigators said, stipulates that no limit be set on the number of bidders in a tender, while the ministry addressed only 10 concrete companies. The ministry was also obliged to announce the conditions of the tender publicly, which it failed to do.

Investigators also criticised the tender because it was designed according to a foreign model and was not adapted to Slovak conditions; some crucial tender documents were submitted in English only, while others were in Slovak.

Minister Palacka, when confronted with these findings, dismissed the legal infractions as "procedural," and said that similar legal violations would likely be found in "any ministry."

But the tender, which ended with the selection of the Deutsche Bank consortium on April 29, was also criticised by international corruption watchdog Transparency International, which called the selection process "ambiguous."

Transparency International Slovakia (TIS), the watchdog's local affiliate which oversaw the tender directly, said that the guidelines used by the Telecom Ministry's Tender Commission differred from the guidelines followed by the bidders, thus creating confusing and non-transparent conditions.

TIS president Emília Sičáková explained that the process had been flawed from the start. The Tender Commission followed guidelines set in a document named "Methodology," which was in Slovak. On the other hand, the bidders worked according to a document named "Terms of Reference," which was in English. Sičáková explained that no mechanism had existed for resolving confusion when differences in meaning or translation occured.

The tender was further troubled by imprecise terminology, Sičáková said. Bidders were required by the "Methodology" to declare what their "fixed costs" would be in handling the selection of an investor for ST - but what was meant by fixed costs was never specified. The "Terms of Reference," meanwhile, asked for an estimate of "total fixed costs," without saying what was included in this category.

Finally, the winner's success fee - a fee that the advisor would be paid once a deal with a foreign investor and ST had been struck - was never even mentioned in the "Methodology" document, while it was included as a category separate from "total fixed costs" in the document used by bidders.

Compounding the guideline confusion was the stipulation that the success fee was "expected" to be submitted, rather than required, and that the fee was "subject to negotiation."

The mismatch between the rules followed by the bidders and the Tender Commission resulted in mass confusion. When the tender finalists submitted their last offers, consortiums headed by Rothschild and Salomon Bros. included success fees, while Deutsche Bank did not, opting instead to present a fee verbally after their competitors had already submitted their bids.

"At that point, Minister Palacka came up with a new [tender] model with clear guidelines," Sičáková said. The finalists were then expected to submit final offers with the firm submitting the lowest total price being awarded the bid.

Stanislav Vanek, the Telecom Ministry's Regulatory Department Director and a member of the Tender Commission, agreed that the selection process had "run into some problems."

"We had no intention to hide things but we were beginners, there were some mistakes," he said. "We were in a hurry [to select the advisor] and with all the different issues together, we had problems."

Vanek insisted that despite all the problems, Deutsche Bank had won the tender fairly. After Palacka had issued the new guidelines, "all three bidders were invited to submit new success fees," thus making it impossible that Deutsche Bank knew the amount of the success fee they had to best, he said.

Finally, he said, the success fees of the finalists had always been confidential, meaning that Deutsche Bank had not had access to its competitors' bids before submitting its own.

The finalists in the bidding had also had to prove themselves "technically qualified" to advise on the ST sale, Vanek said, by attaining a minimum score of at least 80 out of 100 on a "test to satisfy technical demands."

The cabinet investigators, for their part, said that their discovery of violations did not mean the tender should be annulled, and confirmed that the Deutsche Bank consortium was the rightful winner of the tender. They added that Deputy Minister František Kurej had been responsible for the violations, and that Minister Palacka should apply consequences "in line with the Labour Code."

Palacka told the Sme daily on August 8 that "Mr. Kurej has answered and will answer for the shortcomings. I felt that I would only stir up the situation last week by firing him. What his future will be, I can't say."

Slovak President Rudolf Schuster appointed a successor for Palacka on August 12 - Jozef Macejko, the director of the state-run Slovak Road Administration. No decision has yet been taken on Kurej's position.