After eight months in limbo, former national air-carrier Slovenské Aerolinie (SA) re-launched regular flights between Bratislava and Košice on August 9 after striking a bargain with the Ministry of Transport.
"This is a victory. Finally, civil aviation transport has been renewed in Slovakia," said Pavol Mladý, general director of SA.
After being stripped of its operating license and grounded for eight months, SA will now be allowed to operate three TU 154 M aircraft that it has leased from the Transport Ministry, based on an agreement reached on July 29. 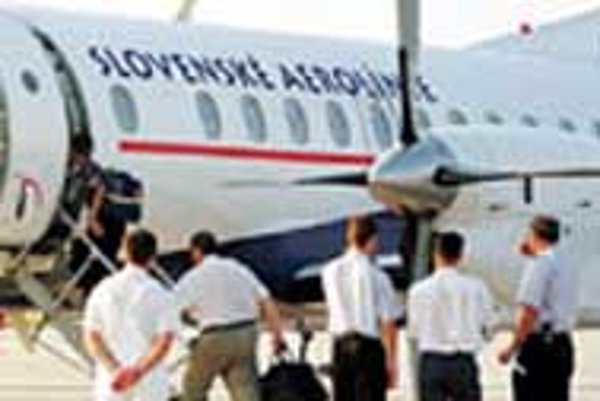 Font size:A-|A+  Comments disabled
After eight months in limbo, former national air-carrier Slovenské Aerolinie (SA) re-launched regular flights between Bratislava and Košice on August 9 after striking a bargain with the Ministry of Transport.

"This is a victory. Finally, civil aviation transport has been renewed in Slovakia," said Pavol Mladý, general director of SA.

After being stripped of its operating license and grounded for eight months, SA will now be allowed to operate three TU 154 M aircraft that it has leased from the Transport Ministry, based on an agreement reached on July 29.

These three planes, owned by the state but used by SA for free between May and December last year, had formed the core of the Transport Ministry's claims that SA had an unfair operating advantage, one that harmed competitiveness in the air-carrier market.

"In reaching the general agreement, we [SA] proved that we are a stable and reliable company and that we can guarantee the further development of air transport in Slovakia," Mladý said.

According to Mladý, the airline will fly two return routes every day with a 30-seater Saab 340 between Bratislava and Košice. Further plans, Mladý said, were to renew routes from Bratislava to Moscow and Poprad, and later to Munich and Zurich.

"Unfortunately, due to operating delays and the resulting losses, our initial plan to open five to six regular routes in two years will now take maybe four years," he said.

Slovakia has not had an airline flying domestic routes since SA and its competitor Tatra Air were grounded almost eight months ago, so SA's decision to re-open its Bratislava-Košice line was welcomed.

"From the commercial point of view, it doesn't matter to us who flies these routes, but rather how many flights there are," said Igor Dula, deputy general director of the Slovak Airports Authority. "We are happy to have as many airlines flying as possible, so that connections between airports develop."

In late February, the ministry announced a tender for leasing and operating the TU 154 M planes. The winner of the tender, the Poprad-based Air Transport Europe, never actually took the planes over, due to an April ruling of the Bratislava Regional Court which said that the ministry was still bound by the terms of its lease contract to SA. The court placed a ban on leasing the aircraft to a third party.

The July 29 out-of-court settlement between the SA and the Transport Ministry thus brings to an end an eight month legal saga. The deal commits each party to drop all claims against the other, including claims for fines, punitive damages or reimbursements.

"The new contract is for five years, and the company will pay a market price rent", said former Transport Minister Gabriel Palacka, who resigned from his post on August 9. "The main point is that the planes will fly again," he told journalists at a July 30 press conference.

According to Palacka, the ministry was ready to reassume its shareholder rights and duties in the company. The state controls a 34% stake in SA through the ministry.

Despite the peaceful solution between the state and the airline, the case wasn't without its sacrificial lambs. Andrej Žiarovský, former general director of the Civil Aviation Department at the Transport Ministry, was recalled from his post by Palacka on August 5, allegedly for his failure to solve the SA case.

Bewildered by Palacka's decision to "fire, not recall" him, Žiarovský argued that the ministry's agreement with SA simply swept the airline's problems under the carpet.

"I'm not aware of any gross mismanagement of our section, and I wasn't even told the real reasons for my recall," Žiarovský told The Slovak Spectator on August 9. "Perhaps I became an uncomfortable person due to my uncompromising insistence that the law be obeyed." Žiarovský added that he had not had anything to do with the SA case since January 15, when it was assigned to another ministry official.

He admitted, however, that his Aviation Department had not pursued the real wrongdoers in the SA case. "We should have taken the former leadership of the Transport Ministry to court, not Slovak Airlines. The Ministry, led by [opposition HZDS party deputy Ján] Jasovský, was responsible for the whole thing. The SA just used the situation to their benefit."

On the other hand, Žiarovský insisted that certain facts regarding SA's ownership structure and business contracts had convinced him that the ministry's objections had a legal basis.

"The main objection we had [to returning SA's operating license] was the ownership structure - the state's position in the ownership structure and its role in shareholders' bodies was not clear," Žiarovský explained. "Then, of course, there was no public tender held for the Russian TU 154 aircraft, which is not fully in accordance with commercial legislation."

The ministry also objected to the duration of the original lease. The original lease contract for the airplanes was for 25 years, Žiarovský said, with a three-year deferral of installments, which contradicted the Law on the Use of State Property.

But SA's Mladý disagreed, saying that his firm's original agreement with the ministry had contained no special privileges. "We offered the ministry the best conditions it could get, even better than the best offer in the [March] public tender," he said.

Mladý said that the SA still had the ambition "to become the dominant air-carrier in the market, which for some people may be a thorn in the eye. But we are able to do it simply, by offering the best service and doing the best business."