Harvard-educated Jozef Barta was appointed to the top position at Slovak mobile operator EuroTel Bratislava on February 16, 1999.
Barta, who came to EuroTel after six years with the Prague branch of Credit Suisse First Boston, inherited a firm that was coming off the first loss-making year in its nine-year history - a 350 million Slovak crown after tax loss in 1998.
Barta also must try to repair a growing clientele gap with his only competitor, Globtel GSM. Globtel reports over 400,000 customers in its GSM net, while EuroTel has around 300,000 in its GSM and NMT nets. 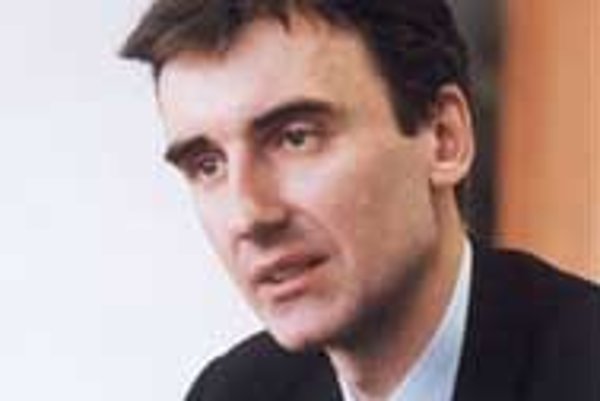 Barta, who came to EuroTel after six years with the Prague branch of Credit Suisse First Boston, inherited a firm that was coming off the first loss-making year in its nine-year history - a 350 million Slovak crown after tax loss in 1998.

Barta also must try to repair a growing clientele gap with his only competitor, Globtel GSM. Globtel reports over 400,000 customers in its GSM net, while EuroTel has around 300,000 in its GSM and NMT nets.

The Slovak Spectator (TSS): Globtel currently has about 100,000 more clients in Slovakia than EuroTel. It has been said that this is a result of your firm's strategy to maintain prices and make a profit even if it means losing prospective clients. Meanwhile, Globtel has suffered large financial losses while building up a larger client base. Are these strategy summaries accurate? Does EuroTel have any plans to change strategies in order to attain a larger market share?

Jozef Barta (JB): Well, I think that these two strategies that you have described are not entirely true, at least not for EuroTel. In the past, EuroTel had extremely high prices and high premiums which increasingly became less and less justified. But this was not really a strategy, it was just not enough thinking on the part of management.

This is a mass market. When you look at the penetration levels, you see it is a mass market and as such you cannot claim that you are an exclusive provider for a few high-value customers. I think our strategy remains focused on quality of service, quality of network, value-added services and so on. But obviously we cannot operate on our own, we have to look at what the competition is doing and a certain [client share] is needed for us to be successful.

Globtel has a strategy where they are extremely price-agressive. I think that this is pretty much determined by the structure of the share-holders. Obviously, with US share-holders in house here, we have a slightly different focus or business agenda [than Globtel].We also sufferred a loss last year, over 300 million crowns. While that was significantly lower than Globtel's loss, it was still a loss.

Going forward, our strategy will continue to focus on quality, quality of service, and value-added services. But obviously we need to get the necessary share of the customers that are left out there. We don't believe that penetration has reached its peak in Slovakia. We still believe that there are more people out there who will buy mobile phones - all the predictions for the mobile penetrations in this country have been too low and [predictions] will always be exceeded. As a result, the battle for the customer goes on.

TSS: Although EuroTel entered the Slovak market before Globtel, in 1991, Globtel quickly caught up to your firm in terms of clientele. Since catching up, they have pulled away from you significantly. Has this fact served as a wake-up call to EuroTel to change your strategy?

JB: I think so, yes. I see two main reasons why EuroTel was passed so quickly. Obviously, one was the very aggressive start of Globtel [in January, 1997] and how they came in with extremely low prices. If you look at any of the surrounding countries like Hungary, the Czech Republic or Poland, none of the new-comers came in with pricing that aggressive, and none of them suffered Globtel's kinds of losses. In fact, they are all making money by now. So that is one reason. But a bigger fault lays on the side of EuroTel because EuroTel had been operating here as a monopoly operator for six years and I think it was somehow embedded in the management's mind that it was easy to operate because if you wanted a mobile phone, there was only one supplier.

We made it easy for Globtel to surpass EuroTel because we didn't do anything or we did very little. There was no strategy for how to operate in a competitive environment. It was very easy to operate when EuroTel was here for six years on their own, but once serious competition began, EuroTel didn't react quickly enough.

TSS: You mentioned that predictions for the Slovak market penetration levels have constatntly been surpassed. Why have Slovaks embraced mobile technology so much more quickly than analysts predicted?

JB: I think all central European countries have embraced this technology very quickly and I think the incremental margin that we have over the Czech Republic, for example, has been determined by the pricing we have here. We did a recent comparison [study] which showed that the price level on average in Slovakia is about 50% lower than in the Czech Republic and 70 to 80% lower than prices in Hungary. And I'm not even looking at western European prices, I'm only looking at central Europe, where the GDP per capita or average income per capita is not dramatically higher than here.

JB: I don't think so. Obviously the Scandinavian countries are a phenomenon, it's totally different. When I first started to work in this industry and I saw those penetration rates, like Finland with 50%, I thought it was because all those people lived in remote areas and they didn't have a fixed line.

But this is not true. I mean, if you decide to build a cottage in Finland 300 kilometres away from civilization, Finnish Telecom will come and install a fixed line phone for you and pick up the costs. And yet, 50% of the people still have a mobile phone.

The next goal is 15%, and then after that 20%. When that will be achieved, I don't know. But [the market] is still growing. Especially data base services which will become really easy to use and valuable for people - I think that will also draw more people to mobile technology.

TSS: Telecom Minister Gabriel Palacka cancelled a second tender for a mobile operator on the GSM 1800 frequency, and divided the rights between the two existing GSM operators. What does this mean for EuroTel?

What happenned here is basically that we get to use the frequency a year earlier. The payment that we and Globtel have to pay is really two things: we are paying for exclusivity for three years and for earlier access to the frequencies.

I think what Palacka did was the only thing he could have done, really, because he was between a rock and a hard place.

On the other hand, we heard some of the conditions [stated by] potential parties [interested in acquiring a GSM 1800 license], and they were unacceptable for EuroTel. Some of them would have been in breach of our license. These parties were demanding immediate access to 900 frequencies, which is fine although there are very few of them remaining. But they also demanded a very long period of exclusivity on the 1800 frequency and as I told you, our license grants access to us in 2001. It would have resulted in conflicts with the current operators and potential law-suits against the government. So that was really the only thing Palacka could do at that point.

When people criticise [Palacka], they should realise that he got 20 million dollars for issuing these licenses whereas in the Czech Republic the payment will be something around 25 million dollars for a market that is twice the size of Slovakia's and twice as profitable.

In the Czech Republic, they stand to make four times the profit as here, and yet they are paying basically the same fee. I don't think he made a bad deal from the point of view of the Slovak government.

TSS: And from EuroTel's point of view?

JB: From EuroTel's point of view, again, we were in quite a difficult position. We didn't like the fee [of $10 million] - we really thought it was steep, very steep. And if we had waited for one more year, we would have gotten it free. But after all the mess that was happenning here, where EuroTel was being accused of lobbying and bribing, we felt this was a less painful way than to challenge the proposed conditions and try to renegotiate.

TSS: Would a third operator have meant lower prices for the consumer?

I just don't see how a new operator would have been able to charge lower prices. There's just no way - that's why nobody applied, and that's why all these tenders failed. Under the proposed conditions, people just didn't see how they would make money.

JB: Well, they could still go lower depending on how big a loss Globtel and EuroTel are willing to suffer. But if you take into account that the new guy would have had to come in and build a new, more expensive network, to expect even lower prices from a third operator is just nonsense.