Nearly half a million people, officially 17.68% of the workforce, are now unemployed in Slovakia, four percent more than one year ago. Nowhere is the difficulty of this situation clearer than in the southeastern district of Slovakia known as Rimavská Sobota, which posts the nation's highest unemployment rate of 35.41%.
The residents themselves call the Rimavská Sobota area "the valley of hunger." In the district, there are four free jobs for the 14,000 jobless, local authorities said. More than 200 university graduates count themselves among the unemployed. 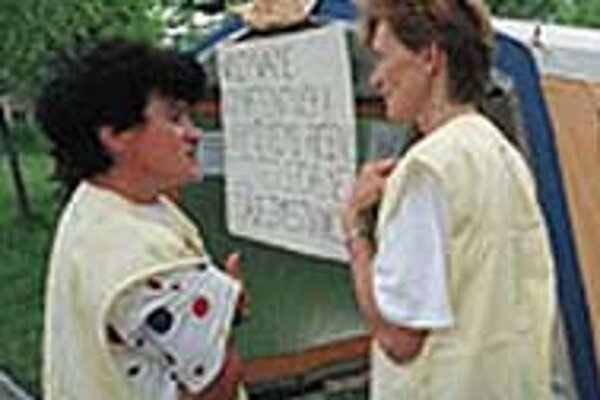 Font size:A-|A+  Comments disabled
Nearly half a million people, officially 17.68% of the workforce, are now unemployed in Slovakia, four percent more than one year ago. Nowhere is the difficulty of this situation clearer than in the southeastern district of Slovakia known as Rimavská Sobota, which posts the nation's highest unemployment rate of 35.41%.

The residents themselves call the Rimavská Sobota area "the valley of hunger." In the district, there are four free jobs for the 14,000 jobless, local authorities said. More than 200 university graduates count themselves among the unemployed.

The Slovak Spectator visited the area on July 21 to examine why it is so troubled. Its reporter found a region where some people seem content just to collect their social benefits, while others, no matter how hard they try, can't find a job.

Many in the region have also been affected by a recent change in the social welfare law, which cuts unemployment benefits to the long-term unemployed, to people who are not actively looking for work, and to those, like new graduates, who have not been registered with the Labour Office for two full years.

During the communist era, the Gemer region, which contains Rimavská Sobota, was heavily supported by the government because of its deep poverty at the turn of the century. Today, its southern reaches are made up of agricultural co-operatives, most of which have now fallen into private hands.

The more mountainous north was once a respectable industrial region, but since privatisation began, mines and other crucial pillars of the local economy have declined or closed. Of the 82,600 inhabitants living in Rimavská Sobota, only 39,630 are now working.

Zoltán Boros, the head of the Rimavská Sobota District Office, said he feels that the state did not consider the local situation sufficiently before pulling important industries out of the area. "The previous and current government have not done what they promised," he said. "In the last six years, many important state institutions have been withdrawn from this district without any consultation with the regional authorities here. There is a danger that the region will be left by the wayside, despite what the government says," he said.

According to Boros, the region needs a financial injection to solve the problem of unemployment. New factories, better infrastructure and the revival of agriculture would do the trick, he said. He also thinks that the government could do more to attract foreign investors to the region by extending extraordinary benefits to companies which locate in Gemer, such as longer tax holidays and other financial incentives.

On the other hand, he said, the unemployment problem is not just one of state neglect - it also derives from the poor attitudes of job seekers.

Boros explained that the legacy of the communist regime, in which unemployment officially did not exist, was a workforce which expected jobs to be found for them rather than the other way around. For too many job seekers, he said, there is little personal initiative to seek out a job where there appears to be none.

Tatiana Ďurčáková, a clerk with the Labour Office in Rimavská Sobota, explained that the Labour Office organises re-training courses in order to help unemployed people find new jobs. Only 92 out of the 730 workers re-trained this year have found jobs, she said, adding that "people here still behave as if they were living under the previous [communist] regime. They think jobs will just come to them."

The long term unemployed are the sorriest lot, Boros explained. After two years of unsuccessful searching, many become resigned to their situations, doing occasional jobs in the summer, or working short-term for private companies, illegally combining the wages they receive with the financial support they get from the Labour Office. Some state officials estimate that about 70% of people receiving benefits do illegal work on the side.

Although many unemployed people in Rimavska Sobota can be seen sitting on benches in front of their apartments or just hanging around the city, others continue to search, asking for the help of district officials. Unemployed mother of two Alžbeta Nociarová, 44, for example, keeps returning to the district office to check for jobs. She lost her job as a cleaning woman in a state cultural facility ("Dom Kultúry") in October 1997. She then lost her benefits in July because of her status as a long-term unemployed person. She and her husband try to support themselves and their two teenage daughters on the 6,200 crowns ($144) per month they continue to receive in the form of her husband's disability pension. But it is not enough. "I am thinking about sending my children to the orphanage," Nociarová confided. "When they grow up and find a job they can come back and live with us again."

Gabriel Kurilla, 52, is an experienced and educated teacher who has not been able to find an acceptable job for the past five years. Instead, he paints and occasionally does seasonal work in a sugar mill. He gets 3,010 crowns ($70) from the Social Insurance Office every month but needs additional help to survive. "My friend is the head of a co-operative farm in this district and he sometimes brings me vegetables, some meat or a few pieces of bacon," he said. He is in fear that he will lose his painting studio, as the town has just raised the annual rent on the place from 1,200 to 40,000 crowns. "Painting is the activity that keeps me alive," he said, while confessing that he sells no more than one or two paintings a year.

Others have stopped looking for work for different reasons. In the center of the town is a homeless shelter for men run by the district office in co-operation with the city magistrate. The 20 people who live there are able to get by on their 3,000 crowns a month in benefits because food and shelter costs only seven crowns a day. The residents said they would not work unless they could earn more than their benefits provide.