When Slovak Romanies began to stream out of the country to seek asylum in June, Slovak government officials went on the offensive. The Roma, they told the press, are stealing from the social benefit system. They don't want to work. They do not face discrimination.
Politically divided and morally downtrodden, Slovakia's estimated 350,000 Romanies have seldom been strong enough to force the Slovak majority to take their problems seriously. But with their social benefits cut back significantly as of July 1, and few jobs open to them, Slovak Romanies have begun to show their discontent openly. Some are voting with their feet, fleeing to countries such as Finland where they imagine life will be better. And for the first time that Roma leaders here can remember, some are beginning to raise their voices in organised protests at home. 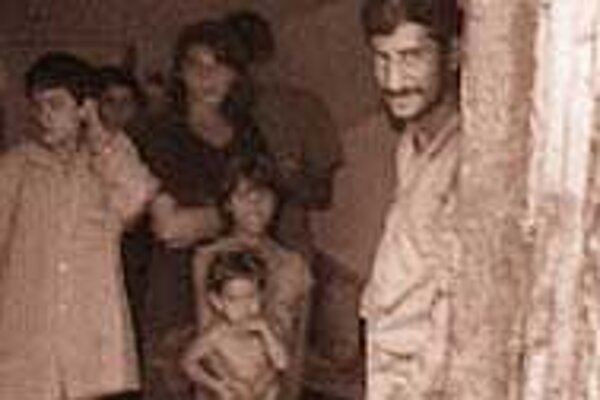 Font size:A-|A+  Comments disabled
When Slovak Romanies began to stream out of the country to seek asylum in June, Slovak government officials went on the offensive. The Roma, they told the press, are stealing from the social benefit system. They don't want to work. They do not face discrimination.

Politically divided and morally downtrodden, Slovakia's estimated 350,000 Romanies have seldom been strong enough to force the Slovak majority to take their problems seriously. But with their social benefits cut back significantly as of July 1, and few jobs open to them, Slovak Romanies have begun to show their discontent openly. Some are voting with their feet, fleeing to countries such as Finland where they imagine life will be better. And for the first time that Roma leaders here can remember, some are beginning to raise their voices in organised protests at home.

In Michalovce, an eastern Slovak town with a Roma population of approximately 15,000, more than 100 Roma gathered on July 23 to protest the government's recent round of social benefit cuts, which has slashed aid to families by as much as 2,000 or 3,000 crowns ($48-$71) per month. The cuts, some Roma leaders say, are specifically aimed at the Roma community, because they apply to the long-term unemployed and to those welfare recipients that labour officials feel are not trying hard enough to find work.

With unemployment near 18% and jobs scarce even for the Slovak population, the Roma's chances of getting hired are slight, Roma leaders say.

In interviews with Roma in eastern Slovakia last week, man after man explained how he longed for the days of communism, when Roma were given jobs like everyone else.

"Before, under communism, I had a good life. I worked for a state construction company for 15 years," said Latso Pokuta, 40, a Roma who recently fled to Holland but was sent back to Slovakia. "Then democracy came and the firm was dissolved. Now we can't live here because the government does not care about us."

"To say Roma don't want to work is just an excuse," said Peter Pompa, a Roma lawyer and advocate for the community. "Every day they walk past the same factory where their grandfathers worked in the communist era. Now, they can't get a job there."

Kežmarok, a town of 17,500 people north of Poprad in central Slovakia, is about as ideal a home for Slovak Roma as exists. The 1,000 Roma in the town are divided into three classes, explained the town's white mayor, Frantisek Gohola. Between 50-100 of them are "well-based" Roma; educated men and women who are physicians or musicians, better off than the average Slovak person in the town. About 70% are "middle-class" Roma, who live as well as the average Slovak. At the bottom rung are the 20% who live in deplorable conditions and wander aimlessly through the town's streets.

About 80% of the town's Roma receive social benefits, he said, though many of them do illegal work on the side to improve their conditions. "But Slovaks do that too," he said, adding that unemployment in the town was now over 20% and that conditions were worsening for everyone.

Gohola was supported in the municipal elections by many Roma because he has successfully kept skinheads out of the town. He is also working on a 10-year-old plan to move the lowest class of Roma out of their crumbling flats in historic buildings to government-built flats. The mayor is hopeful that there will be movement on the project in September.

But things are still far from ideal. Roma report they are not being served in some bars in the centre; the mayor said he has never heard of such a thing. Even the middle-level Roma are afraid to leave the town because of frequent skinhead attacks in neighbouring Poprad and at train stations.

"I feel safe here, and even if I must travel, I don't," said Ladislav Dunka, 44, who receives a disability pension and lives in a spacious, well-decorated flat which belongs to his mother. "Every day I worry about my situation."

Just off the main square, František Gabor, 31, lives with his wife and three children in a dank eight by eight meter room with no window or running water. The family uses a friend's toilet upstairs. Rent for the room is 1,130 crowns a month.

Gabor used to receive a high benefit check by Slovak standards; 9,000 crowns a month, just below the average Slovak salary. Now, the family gets 7,000 crowns and is worried about the change.

The mayor is concerned that cutting the social benefits without creating jobs is just going to make matters worse for everyone. "I have a bad feeling about this. They may raise some protests about the shortage of finances. This will cause more community troubles, more crime," he said.

Tucked into the green hills of Spišska Nova Veš is an abandoned iron factory surrounded by chemically-contaminated soil. The site is home to one of the worst Roma settlements in Slovakia, Rudňany, where about 800 Roma live in the shells of old warehouses or in makeshift, leaky homes they have built themselves.

There are no toilets in the settlement; residents report they just "go outside." Dozens of Slovak and international officials have visited the settlement, said Amelia Pompova, who runs a Roma Community Center in Kežmarok and helps Roma in the region; but save for the installation of electricity two months ago, there has been little change.

In one small room live three families, with a total of six young children. Though it is cold and raining outside, one 2-year old girl is naked. Near the coal stove, a 3-year-old boy nurses from his glassy-eyed mother. Resident František Marik, 26, said he has lived in the settlement since 1983 and gets 5,000 crowns per month for his family of four.

Where the social benefit money goes in Rudňany is difficult to say, remarked Pompová, adding that some of it may be spent on alcohol and gambling. But no one in Rudňany is getting rich off welfare, she said, and if the state cuts social benefits without helping families to relocate, or the adults to get off alcohol, it is the children who will suffer.

In Žehra, a majority Roma village famous for its 13th century wooden church, Roma are facing a different kind of trouble. In the December 1998 municipal elections, a Roma was elected mayor for the first time in the town's 750-year history.

Since then, however, 160 of Žehra's 400 white residents have signed a petition asking that the town be split into Roma and non-Roma settlements. Officials in Spišska Nova Ves district are now asking their superiors in Košice how to proceed.

The petition states no reason for the split. The leader of the movement, Anton Ivanček, who is also the chairman of the local farm co-operative, did not return repeated calls from The Slovak Spectator.

"I asked some white people why they don't want to accept us. They don't have an answer. It's a colour issue," said Žehra town councilman Marian Mizigar. Mizigar added that Ivanček's farm co-operative owed the town about 1 million crowns.

Pompová said other Roma mayors are facing similar troubles. In Petrovce, near Prešov, the elected Roma mayor has not been able to take his seat because a petition signed by the white townspeople asserts the December 1998 election was invalid. "These troubles come not from state policy, but from local policy," she said.

Dissatisfied with their lives at home, some Roma have tried to leave Slovakia. According to the Roma, the emigrants decide where to go based largely on word-of-mouth information in the community about which countries will welcome them.

One rumour currently making the rounds of the Roma community is that Britian will open its doors again to asylum seekers in September. The British Embassy, however, says there is no such change planned to its visa regime for Slovak citizens. "It is a complete rumour," said embassy information assistant Zuzana Melišová.

After a Dutch NGO in Žehra mentioned that Holland was a good place for Roma, rotund Latso Pokuta sold his television and spent his life savings to buy 10,000 crowns worth of bus tickets to the Netherlands for his family of six. Eight other Roma families from Žehra accompanied him.

The group arrived in Holland at the beginning of July but were sent home after three weeks. Pokuta says he doesn't understand why, since the Dutch people "seemed so understanding." Unaware that the Netherlands has refused to take more Roma refugees from Slovakia except in special circumstances, he vowed to return as soon as he could save enough money.

"We saw beautiful houses there, much better than here. The police were kind to us. If they shoot me at the Slovak border I don't care, it doesn't matter to me. I want a better life for my family," he said.

Though things will likely stay the same or get worse for Roma in Slovakia in the coming months, Roma leaders say, leaving is becoming more difficult. Last week, Norway joined the list of countries requiring a visa from Slovaks, in an attempt to stem the small tide of 57 Roma who have recently fled there. Ambassador of the Netherlands Henk J.W. Soeters said Roma refugees like Pokuta should not try to go to Holland, because they will almost certainly not recieve asylum. "There is no reason to grant political asylum because Slovakia is considered a safe country," he said.