Lexa released from jail; Mečiar to be questioned

The release of former Slovak secret service boss Ivan Lexa from pre-trial custody on July 19 was a case of the mice playing while the cat was away, according to some members of the Slovak cabinet.
Lexa, who was jailed on April 15 on charges that he had orchestrated the 1995 kidnapping of Michal Kováč Jr. to Austria, had been remanded in pre-trial custody because prosecutors feared he would try to influence witnesses in the case, including senior members of Lexa's former Slovak Intelligence Service (SIS) staff.
However, the Bratislava Regional Court decided last week that since all important witnesses had already been interrogated, there was no reason to prolong Lexa's stay in jail. 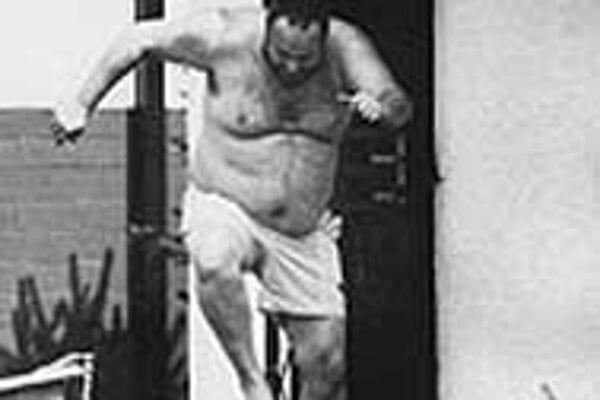 Font size:A-|A+  Comments disabled
The release of former Slovak secret service boss Ivan Lexa from pre-trial custody on July 19 was a case of the mice playing while the cat was away, according to some members of the Slovak cabinet.

Lexa, who was jailed on April 15 on charges that he had orchestrated the 1995 kidnapping of Michal Kováč Jr. to Austria, had been remanded in pre-trial custody because prosecutors feared he would try to influence witnesses in the case, including senior members of Lexa's former Slovak Intelligence Service (SIS) staff.

However, the Bratislava Regional Court decided last week that since all important witnesses had already been interrogated, there was no reason to prolong Lexa's stay in jail.

The decision to free Lexa surprised Prime Minister Mikuláš Dzurinda, who had been on holiday at the time. In an official statement, Dzurinda expressed "surprise and concern" at the Bratislava court's decision, but added he was "convinced... that the legal authorities will quickly succeed in closing the abduction case... and other cases connected with the former leadership of the secret service that have traumatized society. The offenders in these cases have to be punished."

Interior Minister Ladislav Pittner also seemed to cast doubt on the court's decision. "I can't afford to offend certain people, but they know why I refuse to comment on this matter," he said.

Justice Minister Ján Čarnogurský, who had been on a business trip in France at the time of the court's verdict, went one step further on July 27 by lodging a complaint at the Supreme Court. Justice Ministry officials asked the high court to cancel the July 19 decision of the regional court, saying they suspected that the lower court had acted improperly.

According to Deputy Justice Minister Ján Mazák, many reasons existed to continue holding Lexa in pretrial custody, as several former SIS employees who were directly involved in the abduction of Kováč Jr. have yet to be questioned.

Lexa, who immediately sequestered himself from the public at a holiday retreat in the western lake resort of Senec, has refused to speak to the press.

The matter of Lexa's investigation - and that of former Interior Minister Gustáv Krajči on charges that he marred a May, 1997 referendum on direct presidential elections and NATO membership - has been bedevilled in recent weeks by fears that the investigations are illegal.

On June 28, the Constitutional Court ruled that Dzurinda had exceeded his legal powers last year when he cancelled an amnesty granted by former prime Minister Vladimír Mečiar in the Kováč Jr. and the NATO referendum cases. The court's verdict, however, carried a 'pro futuro' character, meaning that it did not apply to past cases.

Since the Constitutional Court ruling, a debate has raged between the government and the opposition on whether the prosecution of Lexa and Krajči has any legal footing. The government has vowed to continue in its investigations; Mečiar's opposition HZDS party has called for a special parliamentary committee to examine government wrongdoing.

"The fact that Ivan Lexa was released from custody proved that the cabinet of Mikuláš Dzurinda, and the Prime Minister himself, acted illegally and committed a crime [in cancelling Mečiar's amnesties]," said HZDS deputy Oľga Keltošová for the SITA news agency on July 19.

Another complicating factor has been the testimony of the main witness in the Kováč Jr. case - Jaroslav Svěchota, a former senior SIS officer who admits having participated in the Kováč Jr. abduction. Svěchota told the Plus 7 Dní weekly magazine in July that it was in fact Mečiar who came up with the idea of abducting the son of former president Michal Kováč, with the aim of discrediting the president.

"In my opinion, he was the brains behind the kidnapping," said Svěchota, citing as evidence a taped conversation between Lexa and former Devín Banka chief Karol Martinka.

Svěchota added that if the SIS had been allowed to organized the abduction by itself, it would not have been so unprofessionally executed. "I received three orders directly from Ivan Lexa that I had to execute. I did not coordinate the abduction, but Lexa himself did," Svěchota told the weekly.

Based on the evidence provided by Svěchota and others, the Interior Ministry announced on July 26 that Mečiar would be interrogated in the near future in connection with the Kováč Jr. kidnapping - either as a witness, or if the evidence warranted it, as a suspect.

"If the evidence suggests that Mečiar has a certain share of the responsibility in the abduction case, the investigator is obliged to check on these matters by questioning him," said Jozef Sitár, an Interior Ministry spokesman. "The investigator simply has to respect the equality of all citizens in the face of law, and the duty of providing testimony for the police."

The unspoken question is how far the government is willing to go in its pursuit of Mečiar, or indeed any of the Kováč Jr. or NATO referendum conspirators. The HZDS has already protested that the ruling coalition is trampling the laws of the country and "does not respect the decision of the Constitutional Court on the invalidity of Mikuláš Dzurinda's amnesty."

Fedor Gál, a former political partner of Mečiar in the Public Against Violence (VPN) movement following the 1989 revolution, said that the Slovak government had no alternative but to follow each case to its end.

"The criminals involved in each case have to be pursued, whoever they are," he said. "If the law is to have any meaning, it has to be applicable to everyone, regardless of his former powers and position in the country."

On the other hand, political scientist Ľuboš Kubín said that the current coalition had to take into account "the environment" in which any prosecution of Mečiar might proceed.

"These cases have already become so politicised that there is an increasing risk that they will end in an unfortunate way," Kubín said. "It will be very unfortunate if Mečiar becomes a martyr through these investigations, because that would polarise society even further."