Former Prime Minister Vladimír Mečiar made a dramatic return to political centre stage on July 13 with two announcements: first, that the current government would not survive its full four-year term in office, and second, that his party, the opposition HZDS, had already held "unofficial" discussions with two government parties about cooperating politically following pre-term elections.
Mečiar's statements were immediately refuted by politicians from the government parties mentioned - the Party of the Democratic Left (SDĽ) and the Party of Civic Reconciliation (SOP) - but doubts regarding the political future of the current ruling coalition remain nevertheless. 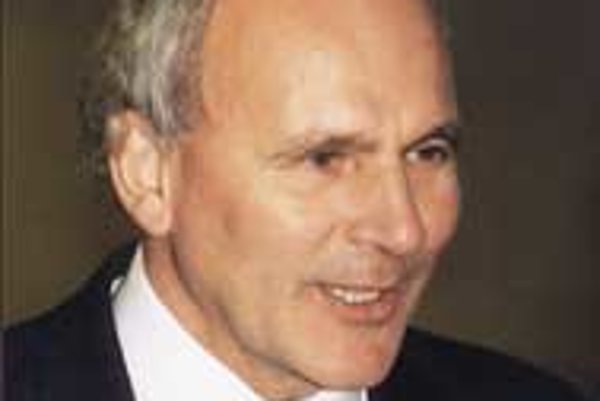 Font size:A-|A+  Comments disabled
Former Prime Minister Vladimír Mečiar made a dramatic return to political centre stage on July 13 with two announcements: first, that the current government would not survive its full four-year term in office, and second, that his party, the opposition HZDS, had already held "unofficial" discussions with two government parties about cooperating politically following pre-term elections.

Mečiar's statements were immediately refuted by politicians from the government parties mentioned - the Party of the Democratic Left (SDĽ) and the Party of Civic Reconciliation (SOP) - but doubts regarding the political future of the current ruling coalition remain nevertheless.

Four weeks of privatisation scandals and bitter debate over minority rights have shaken the cabinet of Prime Minister Mikuláš Dzurinda. How deep the fissures run is yet to be seen, but as parliament dissolved for the summer on July 10, ruling party deputies swapped charges of corruption and criminal wrongdoing. At the very least, some deputies warned, a cabinet shuffle would be necessary before parliament resumed in the fall.

"Our party has said that it will evaluate the work of its ministers before September," said Parliamentary Speaker and SDĽ leader Jozef Migaš for the daily paper Pravda. "We have asked the other [coalition] parties to do the same. Following this analysis we may decide that some ministers have to leave the government."

Perhaps the most bitter government squabble over the past two weeks surrounded the Law on the Use of Minority Languages, which was passed by parliament on July 10 with the support of every government party except the Hungarian Coalition (SMK), the very party which had initially pushed for such a bill.

Following the passage of the law, which SMK deputies voted against, members of the SDĽ joined the opposition in rising and singing the Slovak nationalist song "Hej Slováci," in an apparent provocation of their Hungarian government colleagues.

SMK deputy József Kvarda told the news agency SITA the SDĽ was trying to muscle the SMK out of politics. "The SDĽ seems to be counting on the fact that the SMK won't be in the government in the future, and that reforms will take place as before, meaning to the detriment of minorities," he said.

But it is allegations of economic corruption - rather than political disagreement - that have really been driving calls for cabinet reform over the last several weeks.

Recent scandals over the selection of an advisor for the privatisation of state telecom monopoly ST, the handling of a license tender for a mobile phone network, and the snap sale of gas storage firm Nafta Gbely, have called into question the performance of two ministers in particular - Telecom Minister Gabriel Palacka and Economy Minister Ĺudovít Černák. Both men are members of the strongest government party, the SDK.

Prime Minister Dzurinda, himself leader of the SDK party, has refused to sack either minister, alienating other coalition government parties. In the Nafta case, for example, Dzurinda insisted that blame lay instead with the leadership of the FNM privatisation agency, and attempted in early July to convince parliament to recall FNM President Ľudovít Kaník and his deputy Ladislav Sklenár. Few government deputies supported the recalls, however, with the SDĽ, the SOP, the Hungarian Coalition Party (SMK) and even some elements of the SDK saying they needed to see proof of wrongdoing before firing Kaník.

SDK deputy František Mikloško said that Dzurinda was trying at all costs to avoid a cabinet shuffle, fearing that it would endanger the stability of the government. "Mikuláš Dzurinda doesn't want the government to be rebuilt. It is the SDĽ which is pushing for this," he said.

Mikloško explained that a cabinet shake-up could trigger a dangerous public debate on the government's failings since being elected. "The fact is that almost a year after elections, this government doesn't have a complete concept of how they want to change this country. Added to this have been the recent scandals. If the SDĽ really opens up the question of rebuilding the government, the coalition will experience a real crisis," he said.

A cabinet shuffle would not only hurt public confidence, Mikloško continued, but could fatally weaken the cabinet. "For Dzurinda, it would be very difficult and dangerous to remove a brick from the structure that he built himself. I'm thinking here of Ľudovít Černák - his recall could have a domino effect, like the recall of the Telecom Minister [Palacka] and the Agriculture Minister [Pavol Koncoš] and so on."

And even if Dzurinda were prepared to endanger the government by washing its dirty laundry in public, the Prime Minister could not fire his weaker ministers without provoking open warfare within the SDK.

Grigorij Mesežnikov, director of the Bratislava think-tank Institute for Public Issues (IVO), explained that the SDK is itself made up of five member parties, most of whom are now fighting to regain their former political identities and influence. The fact that the FNM's Kaník belonged to the Democratic Party [DS] faction of the SDK, while Černák was head of the Democratic Union [DU] grouping, made firing one and defending the other a political as well as a professional matter.

"It is logical that these scandals have caused internal problems within the SDK," Mesežnikov said, "because they began a contest between the [SDK member] parties who are looking for the identities they had before entering the SDK."

By all accounts, the SDK faction causing the greatest tensions within the party is the Christian Democratic Movement, headed by Justice Minister Ján Čarnogurský. As a senior government politician told the news agency SITA, "tensions between the KDH and the SDK are destabilising the entire government coalition."

"If someone on the one hand wants a strong Christian Democrat party, and someone else wants a strong SDK, a chasm opens up," said Mikloško, himself a member of the Čarnogurský faction. "I must say that this chasm is still widening, and I have no idea where it will end."

With so many internal problems - SDK party infighting, Hungarian-SDĽ antagonisms and allegations of corruption - the government is headed for some kind of shake-up, said many government deputies. But almost all dismissed the HZDS forecast of early elections out of hand.

"Pre-term elections are simply a propaganda tool of the opposition," said SDK deputy Ján Budaj. "They are feeling powerful because they see our problems and count on the negative effect that the government's economic austerity measures will have on voters."

Mikloško also refuted the possibility of early elections. "The entire government coalition is taking very unpopular [economic] steps at the moment," he said. "Early elections would therefore be suicide for each government party."

Mikloško added, however, that there were "huge pressures for reconstruction of the government, most of which come from the SDĽ. A very interesting fall awaits us."