Mass confusion and allegations of conspiracy have followed on the heels of a recent exodus of Slovak Romanies to Finland on the eve of that country's assession to the EU presidency.
The arrival of 1,069 Romanies, seeking asylum from unfavourable economic and political conditions and discrimination, resulted in the imposition of a visa requirement for Slovak citizens July 6. Their charges of discrimination and racial attacks are raising questions about Slovakia's EU readiness and may complicate Slovakia efforts at EU fast-track status. 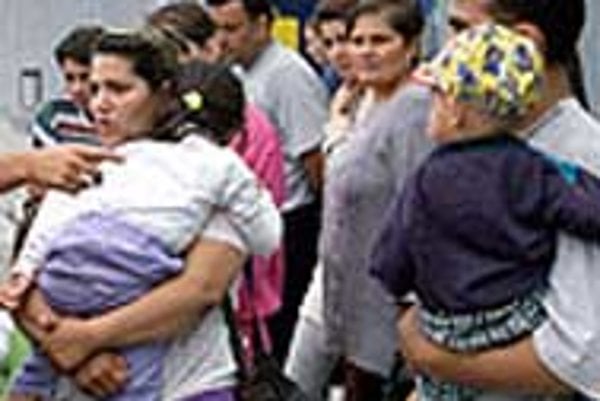 Font size:A-|A+  Comments disabled
Mass confusion and allegations of conspiracy have followed on the heels of a recent exodus of Slovak Romanies to Finland on the eve of that country's assession to the EU presidency.

The arrival of 1,069 Romanies, seeking asylum from unfavourable economic and political conditions and discrimination, resulted in the imposition of a visa requirement for Slovak citizens July 6. Their charges of discrimination and racial attacks are raising questions about Slovakia's EU readiness and may complicate Slovakia efforts at EU fast-track status.

In a speech marking the start of the nation's EU presidency, Finnish Prime Minister Paavo Lipponen suggested on July 1 that Slovakia review its treatment of Romanies. "It is out of the question that countries where conditions are not in order should join the European Union," he said. "We want to find out what is happening in Slovakia and how this could affect their progress towards EU membership."

The reason for the significant migration to such a politically sensitive country is the subject of heated debate. While some Slovak Roma authorities say the effort was organized internally by the Roma, others hold instead that terrible conditions at home and good welfare conditions in Finland were behind the spontaneous move.

Nervous government officials have gone further, pointing not only to Roma organisation but also to possible influence by the HZDS, the main opposition party. To support their claims, the officials cite the large amount of money spent by the largely unemployed asylum seekers, all of whom flew to Finland and some of whom took taxis from eastern Slovakia to the Budapest airport.

Pál Csáky, Minister of Human and Minority Rights, said that the mass migration was due to the workings of a group trying to paint Slovakia in a negative light. However, he declined to specify who he believed was behind the effort. Cabinet Appointee for the Roma, Vincent Danihel, was more specific, directly accusing members of the HZDS.

Upon returning from a meeting with Lipponen July 5, Danihel said he was certain that the exodus had been "organized". A flight ticket to Finland costs around 60,000 crowns, he charged, way out of the purchasing power of most Romany. Danihel then asked who would lend money to the unemployed Roma before suggesting HZDS participation.

HZDS spokesman Marian Kardoš flatly rejected Danihel's assertion that his party was involved. "It's total nonsense to link the Romany departure with the HZDS. It's not political or racial, it's purely economical," he said. "If it is political," he added, "it is because of the politics of the current government."

According to the daily Pravda, Romanies from Petrovce pri Laborci, who are now in a Finnish camp 200 km east of Helsinki, claim to have a videotape documenting an organised attack on the Roma part of the city. The offenders, unidentified men who wore black masks to conceal their faces and spoke Ukrainian, allegedly used baseball bats and burning bottles to destroy Roma homes and other property. The Romanies said they would give the documentary material to the Finnish immigration office as evidence of their plight.

Discrimination against Roma in Slovakia has been well documented by international monitoring organizations. Authorites here have repeatedly failed to guarentee the rights of Roma, with slow or no response to racial attacks. Romany children are often sent to segregated schools, said Alison Pickup of the European Roma Rights Center.

"I think conditions for morst Roma in Slovakia are pretty intolerable," she said. "They face discrimination in every area of life, from getting a job to simply going to the store. Not every Roma has been attacked by a skinhead, but all have reason to fear it."

Josef Šana, mayor of Košice's Lunik IX district, a Romany ghetto, said that the exodus was in part a reaction to Romany frustration with the current government. "The government doesn't do anything for us. I presented two programs for Csaky this year - one for the completion of an elementary school and the other for a block of flats - and he laughed." Romany groups have demanded the resignation of both Csaky and Danihel, he said.

Roma leaders tell conflicting storiesabout whether or not the migration was coordinated by the Roma Intelligentsia of Slovakia (RIS). Ivan Tokár, who said he was vice-chair of the group, told the daily Pravda that a proposal to organise departures of Slovak Romanies had been made three months ago. But Tibor Loran, who also claims to be the vice-chair of the RIS, said there was no such meeting.

Judd Nirenberg, the director of the Open Society Institute's Division of Romany Participation Program based in Budapest, said that the idea that the Romanies themselves had organised the exodus was ludicrous. "It is ironic to blame the Romany migration on Romany organisations when they can't even get their official views together," he said, referring to the conflicting reports from the RIS.

With economic conditions in Slovakia steadily worsening, conditions for many Roma here are also becoming more difficult.. Unemployment benefits will soon be cut and the period of receiving benefits will be reduced from 12 to 9 months. Long-term, the situation seems grim, as the National Labor Office announced last week that it may be bankrupt by the year 2000.

An adult asylum seeker in Finland receives 1,740 Finnish Marks monthly, or almost 14,000 Slovak crowns, making it one of the most generous welfare states. In addition, Finland has a reputation for respecting Roma rights, Pickup said.

None of the Roma have yet been offered asylum in Finland, and depending on investigations into their reasons for immigration by the Finnish government, all may be repatriated, officials announced last week.