The last condition for Slovakia's return to the vanguard of countries queuing for EU acceptance - the passage of a minority language law - has proven the most trying of all.
For over a week at the beginning of July, parliament debated two versions of the long-awaited Law on the Use of Minority Languages. The defeat on July 6 of the proposal advanced by the Hungarian Coalition Party (SMK) left only one bill in the running for approval before parliament broke for the summer on July 9.
The latter proposal, a watered-down version of the tougher Hungarian bill, was likely to be passed by parliament without the support of the Hungarians, SMK leader Béla Bugár told The Slovak Spectator at press time on July 8. 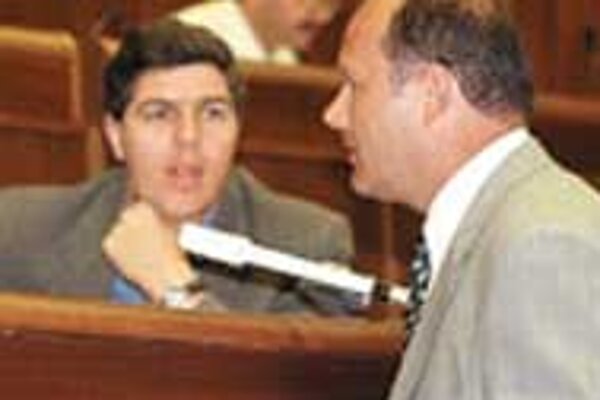 Font size:A-|A+  Comments disabled
The last condition for Slovakia's return to the vanguard of countries queuing for EU acceptance - the passage of a minority language law - has proven the most trying of all.

For over a week at the beginning of July, parliament debated two versions of the long-awaited Law on the Use of Minority Languages. The defeat on July 6 of the proposal advanced by the Hungarian Coalition Party (SMK) left only one bill in the running for approval before parliament broke for the summer on July 9.

The latter proposal, a watered-down version of the tougher Hungarian bill, was likely to be passed by parliament without the support of the Hungarians, SMK leader Béla Bugár told The Slovak Spectator at press time on July 8.

"It's still difficult to say which of our demands will be met in the government bill," Bugár said as parliament debated an additional 20 conditions that the Hungarians wanted to see included in the final minority language law. "If we don't approve the government proposal, it will be a signal that some parties in the government coalition have not understood the importance of designing a law on minorities that has the support of minorities."

The most curious - and for EU-conscious Slovak citizens, the most troubling - aspect of the minority language law debate was that the two competing proposals had originated from within the same coalition government. Observers have feared that the EU would interpret it as a bad signal if the 'government' proposal was passed without the support of the SMK ruling coalition party.

But Pavol Hamžík, Deputy Prime Minister for European Integration, told The Slovak Spectator that the government proposal would satisfy the EU even without Hungarian endorsement.

"In truth I would be happier, and the EU would probably welcome it more, if this law were approved with the support of the SMK," he said. "On the other hand, this government proposal is truly a worthy one. It guarantees not only the use of minority languages in officials contacts, but a great deal more besdies. If the SMK's demands are not approved due to a lack of political will, this law will stll be respected by the European Commission [EC] and the EU. We consulted this proposal with the OSCE, the EC and its High Commissioner Max van der Stoel. So if it is passed without SMK support, it will still be exactly the law which the EC expected of us."

The EU requested in 1997 that the former government of Vladimír Mečiar pass a law on the use of minority languages as one of the political conditions for Slovakia to be included in the frontrunner group of countries for EU acceptance.

The EU objected to the Mečiar government's Law on the State Language, which took effect on January 1, 1996. That law essentially required the use of Slovak in all walks of public life, cancelling out the provisions of a former language law which had guaranteed minorities the right to use their languages in official state contacts.

A Constitutional Court decision from autumn 1997 upheld the complaint of a group of opposition politicians and agreed that Slovaks of Hungarian descent have the right to use their language in officials state contacts. Despite the verdict, however, and despite the fact that fulfilling the EU entry criteria had been part of its own government programme in 1994, the Mečiar cabinet did not amend the anti-constitutional law.

Today, under the Dzurinda government, Mečiar's HZDS party is actually organising a petition against the passage of a new law on the use of minority languages. Curiously, the petition spites not only the EU but also Slovakia's own constitution.

Article 6 of the Slovak constitution says that "the use of other languages than the state language in official contacts is guaranteed by law," while article 34 says that "members of national minorities have the right to use their languages in official state contacts."

The existing and unconstitutional State Language Law even violates Slovakia's international committments. The Slovak-Hungarian State Treaty, signed by Mečiar in 1995, guaranteed that citizens of either country who identified themselves as belonging to a Slovak or Hungarian minority group "have the right, subject to the laws valid in each country and the international conventions that each country has signed, to use their mother tongues in official contacts."

Despite the obvious legal necessity of approving a minority language law, however, the current government was unable to agree on what provisions the law should contain. Three ruling coalition parties - the SDK, SDĽ and SOP - favoured a language law which would guarantee minorities the right to use their mother tongues in official contacts in areas where they represented more than 20% of the population.

The Hungarian Party, on the other hand, insisted that the 20% floor was still too high for other Slovak minorities - the Romany, Ruthenian, Ukrainian and German groups - who nowhere existed in such concentrations as the Hungarians. Lájos Meszáros, a deputy with the Hungarian party, said the 20% floor in the government proposal would not be met by 158 municipalities containing over 100,000 citizens of minority descent.

The Hungarians also insisted on a minority language law that guaranteed the use of minority tongues in other areas of public life such as schools, courts, culture and media. Their demands were enshrined in a separate minority language law proposal, which went to parliament with its government-sponsored rival on June 29 but was soundly defeated a week later.

Ľuboš Kubín, a political scientist with the Slovak Academy of Sciences, said that for both the Hungarians and their ruling coalition partners, approving a language law was far more than a matter of simply fulfilling EU entry criteria or removing a legal contradiction.

"The government elite realised that passing the minority language law had to be more than an empty gesture towards the EU," he said. "They understood very well that approving the law would gain the the support of citizens who claim a minority background. The Hungarian minority alone represents over 10% of the Slovak population, and has stable representation in government."

But while the government stood to gain minority votes by satisfying Hungarian demands, Kubín said, it stood to lose a great deal more among the Slovak electorate.

"For the other three governing parties to support the Hungarian Party demands, they would have to turn a blind eye to nationalist prejudices that still exist thanks to the opposition Slovak National Party [SNS] and the media."

Even the Hungarians themselves, Kubín said, had been playing politics over the minority language bill. Given the stability of the SMK's electorate, the party had little to fear if they didn't push their language demands very hard.

"The unwillingness of the Hungarians to give in on their demands is mostly do do with the fact that for the first time in their history they hold executive power in this country," Kubín suggested. "They want to create a firm, uncompromising basis on which they will conduct politics for their entire four year term."

But Bugár insisted that the SMK was truly unhappy with the government proposal, comparing it to laws passed under the Mečiar government.

"The previous government often approved laws as a pro forma gesture which did not conform to real needs," he began. "Even if this current [minority language law proposal] satisfies van der Stoel, it will not help us unless it addresses practical needs."

Bugár said that the 'practical needs' of minorities went beyond permission to use their mother tongues in official contacts into the realm of culture and education. If the Hungarian proposals were ultimately not included in the government language law, he said, minority citizens would simply continue demanding to be served in their own tongues. "Hungarian and Ruthenian citizens will be required, as they have until now, to break the state language law."