A disappointing ninth-place finish at a recent international baseball tournament should not be taken as the true standard of Slovak baseball, according to the nation's players and coaches.
The head coach of the Slovak team, Juraj Bunta, said that while he was disappointed with the final outcome of the June 23-27 "Prague Baseball Week" tournament, he was pleased with the play of his young team. With the help of more American coaches and additional funding for proper equipment, he said, the Slovaks would soon be beating teams they are now losing to in close games. 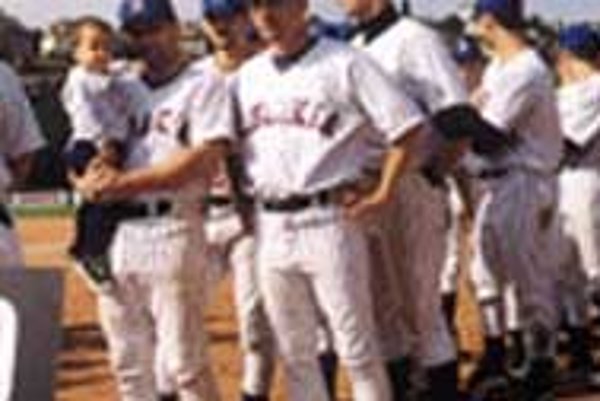 Font size:A-|A+0
A disappointing ninth-place finish at a recent international baseball tournament should not be taken as the true standard of Slovak baseball, according to the nation's players and coaches.

The head coach of the Slovak team, Juraj Bunta, said that while he was disappointed with the final outcome of the June 23-27 "Prague Baseball Week" tournament, he was pleased with the play of his young team. With the help of more American coaches and additional funding for proper equipment, he said, the Slovaks would soon be beating teams they are now losing to in close games.

Hope for the future

Baseball is a new sport in Slovakia. The first organised league, the Slovak Baseball Federation (SBF), began in 1994. Although the game has increased steadily in popularity, however, the Slovak national team has struggled in international competition.

The national team consists primarily of players from the SBF's first-place team, the Trnava White Angels. The week before the Prague tournament, the White Angels had played a tournament in Brno and, as a result, had no time to practice and were tired. Therefore, when the Slovak squad drew the Americans in the first round, they practically conceeded defeat before the first pitch and started many of their younger players.

The result, predictably, was a thrashing. The Slovaks suffered their worst defeat of the tournament, losing 15 to 1 in a game shortened by the ten run mercy rule. The team pulled together, however, and shocked one of the two heavily favoured Dutch teams, HCAW, behind the crafty pitching of Marian 'Čočo' Krásny and the powerful hitting of Rado Nespala and Martin 'Beavis' Černák. Čočo pitched seven strong innings of four-run baseball, Černák had three hits, and Nespala added a home-run in a 21 to 10 victory.

"We totally surprised them," Černák said. "The whole team hit well and Čočo pitched great. But the game ended at 20:45, which was a problem because we had to get up at 6:30 the next day to play a double header."

The scheduling made a tired team even more tired, Černák said, and the result was a heart-breaking defeat at the hands of the Czech team. The starting pitcher for Slovakia was Samo Ulček, a hard-throwing lefty with a fastball that tops out in the upper-80's, and who is widely regarded as the best pitcher in the country. Ulček's ability even earned him a ticket to California to pitch last year for Laney Junior College, and he has been approached by at least one Major League scout.

Ulček was in top form, as he held the hard-hitting Czechs, who finished fourth in the tournament, to four runs and left the game leading 5 to 4 in the ninth inning. Kamil Grelyneth came on to close out the game, but allowed a run, sending the game to extra innings where a two run-homer by the Czechs ended the contest in the eleventh.

"At that point, we were just tired," said Černák, who also spent a year playing junior college baseball in California at Caňada College and finished the tournament with the sixth-best batting average. "That game was a tough loss, and then we had to play our third game in 16 hours." The third game was a dissapointing 6 to 2 defeat to the Germans, who celebrated their only victory of the tournament.

The Slovaks managed to salvage their last game by beating the other Dutch team, Robur 58, 13 to 11 after staking their opponents to a six-run first-inning lead. Čočo came on to pitch in relief and kept the game close while Ján Cesnak, Černák and Nespalo, who finished fifth in the tournament in hitting, led a hit barrage to clinch the victory.

Head coach Bunta said that with the exception of the game against the Americans, his team had played well against tough competition. Slovak baseballers can compete on this level, he said, but they need more money and more American coaches who are willing to stick it out for the long haul.

"We have lots of interest in the league. Last year, the SBF had 600 players, while this year we have 900. But we can't provide the players with the proper equipment or facilities," he said. "Also, we need American coaches on the team who will stay for longer spans of time."

One coach from America who has been in Slovakia for over four years is Andy Weissman, who helps coach the White Angels and also coaches a team called the Oaks. According to Weissman, Slovak coaches lack a 'feel' for the game as a result of their trying to learn fundamentals second-hand.

"Slovak [coaches] learned the game piece by piece and they don't pay attention to its natural feel," he said. "No one here has a feel for why Ty Cobb played so well and was still an asshole, or why Micky Mantle drank so much but still got down the line quickly. They have no feel, so they lack a creativity and have a mechanical approach. For them, adjustment is difficult."

Černák agreed, saying that his year in California had opened his eyes to how much more advanced American players are than Slovaks. "When I got to Caňada, I spent three months in the batting cage trying to adjust to the pitching, the velocity," he said. "It's different there - we had a hitting coach, an outfielders coach, a pitching coach, and so on. I spent the year taking notes from what the coaches said so I could spread my knowledge here in Slovakia."

While Slovak baseball players wait for more money and American coaches, they say they'll continue to plug away and improve. "We have outstanding pitching, better than most countries," Bunta said. "But the hitting must improve. And it has - we are definitely better this year than last year."