Petražalka is the largest district in Bratislava, and also the most notorious. Nicknamed 'Bratislava's Bronx,' Petržalka has long been renowned for its high rates of drug addiction, alcoholism and suicide. Its 'socialist realism' architecture is ugly, and its aura of human depression palpable.
But nowadays, when people look across the river at the sprawl of identical concrete buildings, they are looking at a Petržalka that is doing its best to transform itself into a desirable place to live. Numerous new construction sites, especially in the area closest to Bratislava between Einsteinová Street and the Danube River, are being started and finished with a rapidity that suggests that Petržalka may soon lose its 'wrong side of the river' image. 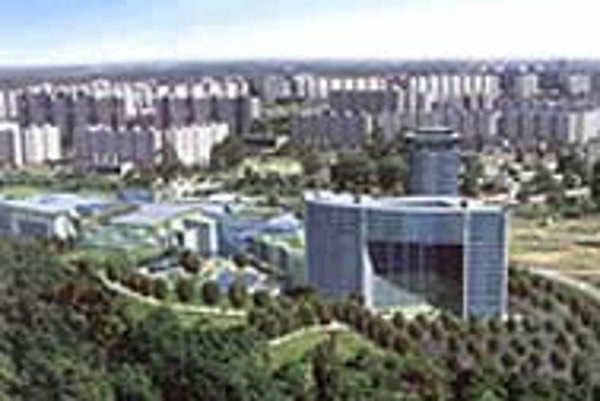 Font size:A-|A+0
Petražalka is the largest district in Bratislava, and also the most notorious. Nicknamed 'Bratislava's Bronx,' Petržalka has long been renowned for its high rates of drug addiction, alcoholism and suicide. Its 'socialist realism' architecture is ugly, and its aura of human depression palpable.

But nowadays, when people look across the river at the sprawl of identical concrete buildings, they are looking at a Petržalka that is doing its best to transform itself into a desirable place to live. Numerous new construction sites, especially in the area closest to Bratislava between Einsteinová Street and the Danube River, are being started and finished with a rapidity that suggests that Petržalka may soon lose its 'wrong side of the river' image.

Transforming a district primarily made up of featureless concrete blocks of flats, many of them in a parlous state of disrepair, is not an easy task, confessed Igor Federoňko of Bratislavská Realitná Kancelária (BRK). But he argued that by focusing on specific areas, such as the area closest to the river, the 'feel' of the district can be greatly improved.

"With all those big concrete buildings, it's tough to change a lot," he said. "But what you can do is work on the front part, the part that is very close to the old town. People now think that the front part of Petržalka is a good area and this will help the value go up."

For all of its drawbacks, real-estate experts now hail Petržalka as the best location in Bratislava to build new enterprises. Its location next to the old town and the main highways leading to the Hungarian and Austrian borders, its low real estate prices and the vast quantity of available building sites have turned it into a hotbed for prospective developers.

Hotels, supermarkets, restaurants, pubs and blocks of flats have all been built recently or are under construction in the area. The newest project is an ambitious venture being managed by the HB Reavis Group, called the Bratislava Shopping Centre (BSC) which will, when completed in April 2001, be the largest of its kind in Slovakia

"The location was very important for us, it is very strategic," said HB Reavis's Marek Vrbovský. "One study showed that in 1997, 147,300 cars passed the site where the BSC will be. When construction is completed, that number will increase to 247,000 cars per 24 hours."

Vrbovský explained that the site - at the junction of Nový Most and Einsteinová, across from the Incheba exhibition hall (see illustration) - would be even more desirable when the so-called Košický Bridge is completed between Starý Most (Old Bridge) and Pristavný Most (Harbour Bridge). The Košický project, he said, would add another overpass to the highway system and would give Petržalka direct access to the Czech border as well as to the Hungarian and Austrian borders.

But Petržalka's good location is not the only advantage that is luring developers across the river. According to Federoňko, the price of land in Petržalka is the cheapest in all of Bratislava's 17 districts. Furthermore, he added, vast tracts of land still sit vacant, awaiting large-scale development.

"The area has drawn the interest of foreign investors because there is a lot of space in which to prepare projects," Federoňko said, adding wryly that the stigma attached to the area has also worked in favour of investors by keeping real estate prices down. "Petržalka is still Petržalka," he said.

Besides the BSC, other developments have surfaced recently. In January, the Belgian supermarket chain Delvita opened a branch here, giving the area its second largest grocery store to the Billa supermarket. An Aral petrol station opened on Einsteinová across the street from the Škoda car dealership of parliamentary deputy Jirko Malchárek. Two separate blocks of flats, one across the street from the convention centre and hotel Incheba, are nearing completion. A new pub called "Bourbon Bar" opened by the bridge last summer as well as the "Leberfinger" restaurant and hotel on Viedenská Street. Even Petržalka's football club has gotten into the act by starting construction of new stands at their home stadium on Jantárová Street by Starý Most.

Petržalka citizens, for their part, say while they are pleased with the construction, they do not believe the experience of living in Petržalka has begun to improve quite yet. Katarina Zaťková, the director at the parliamentary press office and a Petržalka resident, said that the area still lacked centralised meeting places, meaning that the suburb's diverse citizenry had no chance to meet, make friends and, subsequently, take pride in their city.

"In Petržalka there are people from all different levels of society," she said. "But there has never been a place for communal existence. So this kind of reconstruction is very desirable because there has not been a place where people can meet, like restaurants, cultural centres or sporting facilities. These places would allow people to get to know each other and it would make Petržalka a more colourful, happening and vivid place."

Finance Minister Brigita Schmögnerová, herself a Petržalka citizen for over 20 years, said that she particularily lamented the district's lack of public sporting facilities. "There is no indoor swimming pool," she said. "I am not speaking of an exclusive facility, either. I would much rather we had a place accessible to the masses."

Alexander Škurla, marketing director of the Incheba convention centre, agreed that the district needs more centralised gathering locations, such as sporting facilities. In an effort to provide these, he said, Incheba has discussed plans to build a "small port" on the Danube with rowboats and canoes for public use.

More immediately, he said, Incheba will open a sporting center on July 3, which will consist of basketball, volleyball and tennis courts as well as other sporting activities including football and squash. The price of admission will be ten crowns and sporting enthusiasts can play until midnight throughout July and August.

"There are not too many places to hang out in Petržalka," Škurla said. "There are many blocks of flats, but not much else. We are doing this because we want to enrich Petržalka."