The sale of controlling stakes in Slovakia's most lucrative gas storage companies - Nafta Trade and Nafta Gbely - to US energy giant Cinergy on June 22 shocked the government and put in doubt the cabinet's plans to consolidate the Nafta firms under the state-owned gas distributor, SPP.
The purchase was announced on the evening of June 22 by the Czech firm Konsorcium IPB-All, which said it had made the acquisition for Cinergy. The purchase price was not specified, but media reports said that Cinergy would invest $127 million into the firms immediately. 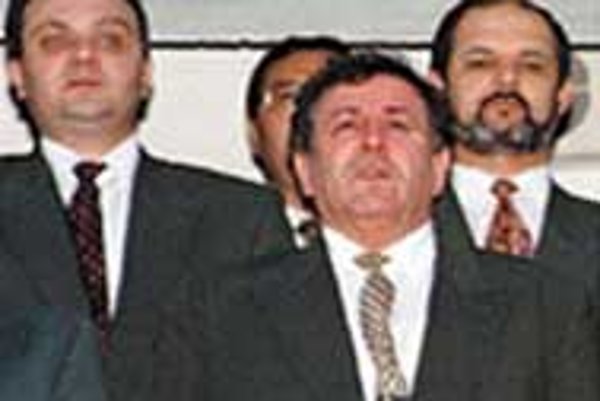 Font size:A-|A+  Comments disabled
The sale of controlling stakes in Slovakia's most lucrative gas storage companies - Nafta Trade and Nafta Gbely - to US energy giant Cinergy on June 22 shocked the government and put in doubt the cabinet's plans to consolidate the Nafta firms under the state-owned gas distributor, SPP.

The purchase was announced on the evening of June 22 by the Czech firm Konsorcium IPB-All, which said it had made the acquisition for Cinergy. The purchase price was not specified, but media reports said that Cinergy would invest $127 million into the firms immediately.

Cinergy has not yet gone public with the deal, and Angeline Protegere, Cinergy's Communica-tions Officer for International Affairs, told The Slovak Spectator on June 23 that "we have not purchased that facility at this moment," although conceding that "we have been looking into this deal."

An angry Economy Minister Ľudovít Černák told a press conference on June 23 that the government would not recognise the sale. The Nafta properties had been controlled by a firm named Arad, which was owned by Vladimír Poór, a close associate of former Prime Minister Vladimír Mečiar. The FNM state privatisation agency had said in late May that it was close to a deal that would bring Poór's Nafta stakes back under state control.

"Despite the best efforts of the cabinet, somebody here has violated transparency," said Černák. "A transparent tender, not Vladimír Poór, will decide who will be the co-owner of Nafta Gbely."

Who exactly the "someone" was who had "violated transparency" was not made clear, but shortly after the press conference Černák recalled SPP Director Pavol Kinceš from his position. According to the daily paper Sme, Kinceš refused to accept the order.

Nor was it clear how Černák intended to challenge the legality of the sale of Arad to Cinergy. FNM lawyer Ernest Valko said that there were no legal loopholes in the deal, and the 'legal expert' for the Nafta situation designated by Černák - Deputy Prime Minister for Legislation Ľubomír Fogaš - also could not give any reason why the Arad sale should not be allowed to stand.

Poór was unavailable for comment. FNM president Ľudovít Kaník, however, told the SITA news agency that Cinergy representatives, with whom he had met on June 23, had said they were interested in a "mutually advantageous relationship" with SPP, including a joint venture in the field of gas storage.

The sale came on the very day that the government had been planning to finalise the creation of a joint venture between SPP and the FNM. Known as SPP Slovakia, the company was to have controlled a 45.9% stake in Nafta Gbely and a 75% stake in Nafta Trade after these were bought back from Poór.

The joint venture was intended to secure cheap gas storage rates for SPP as well as to straighten out the legal tangle that has surrounded Nafta Gbely ever since Poór bought his 45.9% stake in 1996 for around one sixth of its market value. The FNM had intended to sell its stake in SPP Slovakia to a foreign investor by August this year.

The SPP's Kinceš said that if Cinergy now intended to hike prices for gas storage at Nafta Gbely, SPP would take its business elsewhere. "While I am SPP Director, we won't agree with it," he said.

Many questions about the Cinergy purchase remain to be answered, principal among them whether or not the government will challenge the deal in the courts, and what Cinergy intends to do with the Nafta storage facilities. Cinergy representatives, following discussion with the FNM's Kaník and the SPP's Kinceš on June 23, refused to comment on their plans. The next round of negotiations between Cinergy, the FNM and SPP should take place on June 29.

Few analysts were willing to comment on the case, pleading lack of information. But Martin Kabát, an analyst with brokerage house Slávia Capital, said that he did not put much faith in the media reports of the sale. "There are too many participants, too much movement in the Nafta case... everyone is trying to confuse the other side," he said, referring to the three interested parties in the purchase of Arad - SPP, Cinergy and Canadian gas giant TransCanada International (TCI).

However, a source close to the government, speaking on condition of anonymity, said that the Cinergy purchase might by the best solution for Nafta, which is desperate need of investment.

"The government has been dragging this sale out for so long, and has advanced so many stupid plans, that time had grown very short. This sale is good for Nafta and good for Slovakia, even if it does benefit Vladimír Poór."

Born in 1994 from a merger between the Cincinnati Gas & Electric Co. and PSI Energy Inc., Cinergy is based in Cincinnati, Ohio. Its 1998 operating revenues came to $5.9 billion, while net profits were $261 million. The firm is active in Great Britian and the Czech Republic, where it owns several Czech power companies, as well as in Spain, Estonia, Bangladesh, Zambia, Turkey and Pakistan.