Almost 10 years after a revolution put an end to communist rule in Slovakia, left-wing parties retain a chokehold on Slovak political life, while their right-wing counterparts struggle to find both an identity and a voice.
Social democratic parties currently dominate the government. The reformed communist SDĽ, the second strongest coalition faction, holds the Finance, Agriculture and Labour Ministries, as well as the post of Parliamentary Speaker. The SOP junior coalition partner controls the Privatisation Ministry and on June 15 had its leader, Rudolf Schuster, installed as President. 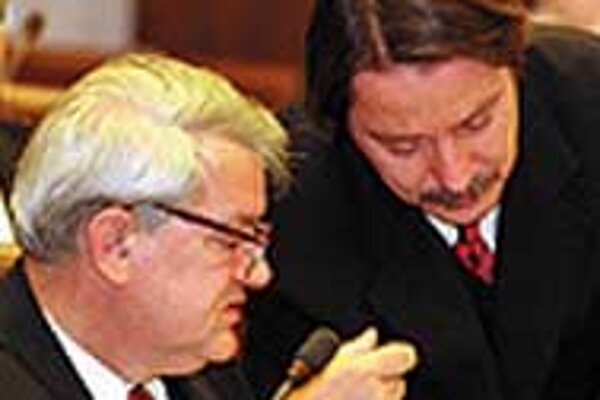 Font size:A-|A+  Comments disabled
Almost 10 years after a revolution put an end to communist rule in Slovakia, left-wing parties retain a chokehold on Slovak political life, while their right-wing counterparts struggle to find both an identity and a voice.

Social democratic parties currently dominate the government. The reformed communist SDĽ, the second strongest coalition faction, holds the Finance, Agriculture and Labour Ministries, as well as the post of Parliamentary Speaker. The SOP junior coalition partner controls the Privatisation Ministry and on June 15 had its leader, Rudolf Schuster, installed as President.

Leftist principles also hold sway in the political opposition, where the largest party in parliament, the Movement for a Democratic Slovakia (HZDS) of former Prime Minister Vladimír Mečiar, announced last month that it would soon transform into a center-left party with ties to international "people's parties."

Even those launching new parties tend to throw their lot in with the left; Ivan Mjartan, former Slovak Ambassador to the Czech Republic, is expected to announce the founding of a new social democratic party at the end of this month.

So where, after almost a decade of capitalism, is the Slovak right wing?

Ján Langoš, chairman of the conservative Democratic Party, a minor faction within the ruling SDK bloc, ascribed the frailty of right wing parties in Slovakia to the nation's communist past.

"We all have been affected by this socialist utopian nonsense, because for fifty years we lived in a state dominated by an absurd ideology. This cannot be erased from people's minds or from their relations to the state in ten years."

While some political professionals agree with Langoš that the communist era still casts a long shadow in Slovakia, others say that the effects of almost six years under Mečiar's authoritarian leadership had an even more profound effect on the development of a normal political spectrum in this country.

Januscz Bugajski, director of East European Studies at the Washington Centre for Strategic and International Studies, blamed the slow emergence of a Slovak political spectrum on the "populism, nationalism, personality cults, and the dispensing of assets and priviledges to a narrow political stratum" promoted by "the former ruling party."

"For much of the past ten years, Slovak politics has revolved around questions of statehood and sovereignty rather than economic restructuring, institutional reform and international integration," he added. "In such conditions, it is not surprising that liberal-conservative, pro-market parties had only restricted exposure and public support."

Grigorij Mesežnikov, president of the Institute for Public Affairs, a Bratislava-based think tank, explained that Slovak voters had been encouraged by the HZDS in their reluctance to embark on the rapid economic changes that might lower their standards of living. This reluctance, in turn, had stifled the development of a middle class and had created a perfect environment for leftist parties to pursue their social democratic policies.

"No middle class was formed, as problems with economic transformation lowered many people's living standards," he said. "Even now, as a consequence of its economic reforms, the current government is finding it hard to create cosy conditions for the business class."

Bugajski agreed, saying that Slovakia now needed "a more dynamic 'new right' to help develop an entrepreneurial and civic-minded middle class which is the backbone of any prosperous European state."

Several things, however, reduce the likelihood of a 'new right' emerging in Slovakia any time soon.

The first issue is the current political alignment of right wing parties in Slovakia. The two most conservative factions, the Christian Democrats and the Democratic Party, are themselves members of the SDK coalition party, and their freedom to carve out a distinct political turf is thus limited.

Secondly, fear that Mečiar might return to the political scene also makes conservatives hesitant to break their coalition pact with the left wing and strike out on their own.

"A significant part of the population still supports undemocratic parties which are not compatible with western-style democratic systems," Mesežnikov said. "There are still too many factors that keep the right and left wing parties tied together instead of pushing them apart, such as the threat that authoritarian powers can return and endanger democratic development."

However, František Milkoško, vice-chairman of the Christian Democrats, said that his party was currently on the threshold of renewal after its sojourn in the SDK. With the defeat of Mečiar in Presidential elections on May 29, he said, the purpose for which the SDK was formed had finally been fulfilled.

"We will now quickly return to the identity we formerly had," he said. "We have slowly been building our identity over the past ten years, and now we will reassume some of the ideals we were forced to submerge within the SDK."

Other ostensibly right wing politicians, however, say that a typical conservative revival is not likely to happen, since the Slovak political situation is exceptional and cannot be compared to western models.

The Democratic Party's Langoš argued that the western political spectrum model could not be applied to post-communist countries like Slovakia, Hungary, Poland or the Czech Republic. "We don't understand western-style democracy, and people who lived after World War II in real democratic countries don't understand us," he said. "Political scientists try in vain to describe the political scene in these countries with the use of western political terminology, such as left-wing and right-wing, conservative and liberal, and so on. And that just doesn't work."

Bugajski dismissed the theory of Slovak exceptionalism. "Every country in Europe has its own specific traditions," he began, "and no two states have identical political parties or constitutencies. Nevertheless, their programmes must be easily identified and recognised by voters."

While Slovakia might take a little longer to develop a normal political spectrum, he said, in the end the country would see the emergence of identifiable right wing parties.

"I do not believe that the post-communist world will invent some effective new political, economic or social formula," he said. "Too many experiments based on dubious theories in this part of Europe have led to disaster in the past."