Schuster pledges to be unifier

Vowing to work towards a more unified government and against a surge in privatisation-related crime, Slovakia's first directly elected president, Rudolf Schuster, took the nation's helm June 15 in a noon inauguration ceremony attended by a wide range of national and international political elite.
Five foreign presidents were present, including Václav Havel, president of the Czech Republic, and the presidents of Austria, Hungary, Poland, and the Ukraine. Among Slovaks, controversial businessmen such as financier Jozef Majsky and TV Markíza General Director Pavol Rusko joined with government officials in a show of support. 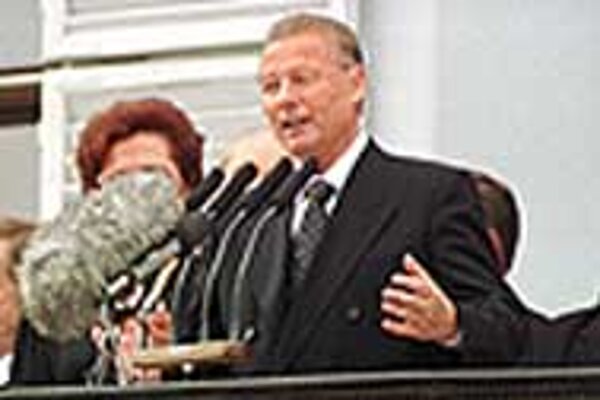 Five foreign presidents were present, including Václav Havel, president of the Czech Republic, and the presidents of Austria, Hungary, Poland, and the Ukraine. Among Slovaks, controversial businessmen such as financier Jozef Majsky and TV Markíza General Director Pavol Rusko joined with government officials in a show of support.

In interviews, the foreign luminaries praised Slovakia for successfully appointing a head of state after 470 days without a president, a move they described as another plus for Slovakia's democratic stability and a positive sign for foreign investors. Many said they thought Schuster himself was an internationally respected leader and wise choice for the job.

"This is good news for me, both as a man and as a Hungarian," the Hungarian president Arpád Göncz told The Spectator. "I wish (Schuster) the blessings of God."

"I think this is very good for Slovakia," said Myung-Chul Hahm, Ambassador from the Republic of Korea, one of dozens of ambassadors in attendance. "As you know, one of the problems for investors was the political instability here, but now it is very clear that Slovakia is ready to move forward."

But praise aside, the man at the center of all of the festivities seemed unclear about the details of the message he wanted to send to the Slovak people. Schuster's two speeches during the day, one given to luminaries after his inauguration and the other to the people in the late afternoon, differed significantly in content, especially on sensitive issues like Slovakia's treatment of minorities. Many Slovaks watching their new president give his public speech said they planned to adopt a wait-and-see attitude about the career politician with a strong communist history.

"From the past, I have my doubts about him, if he is honest and independent," said Dušan Elko, 25, who works at a Bratislava accounting company. "But I have decided to start again from zero about him. Whether he will become a plus or a minus is up to him."

The day's events began at the Reduta National Concert Hall of the Slovak Philharmonic with the formal inauguration ceremony. Looking small in his gold-trimmed rococo chair, Schuster sat flanked by Prime Minister Mikuláš Dzurinda and President of the National Council Jozef Migaš. When it came time to take the oath, the former Mayor of Košice walked over to a small table to lay his hand on the Slovak Constitution.

He then delivered a speech calling in general terms for more unity within the government. While he acknowledged the country's deep economic woes, he had nothing but praise for Slovakia's oft-criticized treatment of its national minorities.

"The Slovak nation has ever preserved good relations with its national minorities," Schuster proclaimed. "Their members have been considered equal citizens, and our co-existence and cooperation may be a good example for the developed nations."

Following the speech, Schuster and the dignitaries poured out into the streets of Old Town, where they walked together to the St. Martin's Cathedral for the religious inauguration ceremony. In some places, onlookers lined the route, shouting out to the politicians and guests. In others, the crowd was thin, as residents went about their regular routines.

Later in the afternoon, the entire company walked over to the white Presidential Palace, adorned with massive Slovak flags and a Hungarian flag. As more than 1,000 people stood under skies threatening rain, Schuster promised in an address to look out for the welfare of all Slovak people, and lamented a tide of increasing hatred between Slovaks and less-than ideal minority relations.

"The tension existing between individual persons and between social-political groups is turning not only into refractory rivalry, but also into irreconcilable hatred, which refuses any reasonable compromise...Restoration of mutual trust between indivduals, social communities, political subjects, the state and minorities belongs to dominant tasks in days and years to come."

Standing in the center of the crowd, printing machine technician Ratislav Turanský said he was pleased by the sight of Slovakia's leader in the company of international presidents. But he was still unsure about Schuster himself. "He promised that he will never disappoint the people," he said as his two-year-old daughter squirmed on his shoulders. "But who knows?"

On June 15, anyway, signs of unity within the parliament were mixed. While the coalition members proudly showcased their new leader, the main opposition party, Movement for a Democratic Slovakia (HZDS), held a press conference across town blasting the current government for not living up to its priorities.

Sergej Kozlík was one of the few HZDS elite to actually attend the inauguration. "Schuster's words were fine but another thing of course is the fulfilment of them," he told The Spectator. "He wants to act as a diffuser of tension in society, but that is not dependent only on him, but also on the political parties." As to the simultaneous HZDS press conference he said, "The political life must go on."