Every traveler dreams of "discovering" an unknown jewel, of going somewhere with modest expectations and being bowled over by the glorious reality of a setting, a city, a range of mountains.
Bardejov, a town of 33,000 in Slovakia's far east, is just such a destination.
For all its remoteness, the Bardejov area offers a variety of sights unparalleled in Slovakia. Bardejov, besides possessing Slovakia's best preserved medieval town square, boasts awe-inspiring churches, 14th century fortification walls with bastions, and Slovakia's only icon museum. In 1986, the town was awarded the UNESCO Gold Medal for Monument Preservation. 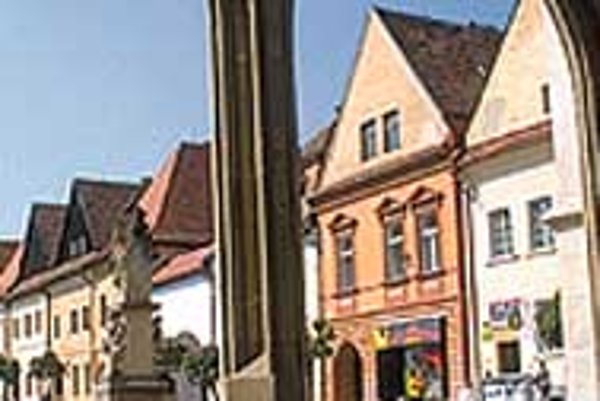 Font size:A-|A+  Comments disabled
Every traveler dreams of "discovering" an unknown jewel, of going somewhere with modest expectations and being bowled over by the glorious reality of a setting, a city, a range of mountains.

Bardejov, a town of 33,000 in Slovakia's far east, is just such a destination.

For all its remoteness, the Bardejov area offers a variety of sights unparalleled in Slovakia. Bardejov, besides possessing Slovakia's best preserved medieval town square, boasts awe-inspiring churches, 14th century fortification walls with bastions, and Slovakia's only icon museum. In 1986, the town was awarded the UNESCO Gold Medal for Monument Preservation.

Bardejov's written history as a regional trade and culture center dates back to the mid-13th century, just after the Mongol hordes invaded Hungary and then suddenly disappeared. King Bela IV of Hungary, as part of an effort to revitalize his kingdom, invited German miners, merchants and tradespeople to what is now Slovakia. Many of the merchants came to Bardejov, a Slovak settlement along the Polish-Hungarian trade route, to set up shop. During the next two centuries, the German colony flourished, earning the privilege to build walls (1352) and the status of an Independent Royal Town (1376), joining Budapest and Košice as the only holders of such an honor. By the 15th century Bardejov was a major producer and exporter of linen and crafts.

The Germans, however, brought new ideas along with the entrepreneurial spirit, as the Catholic Hungarian Empire would discover. Leonard Stuckel, a disciple and follower of Martin Luther, championed the Protestant Reformation in his Humanistic School of Bardejov. Meanwhile, Luther's "Catechism", the first book written in the biblical Czech language was printed here in Gutfesall's printing house in 1581. Appropriately, this printing house beside downtown Bardejov's St. Egídia Church, is a copy center and Christian bookshop today.

St. Egídia, like many churches in Central Europe, has been transformed by fires and changing architectural fashions through the centuries. The three-nave Romanesque basilica visible today is actually a 15th century reconstruction, by Masters Nicholas and Štefan of Bardejov, of an earlier 14th century incarnation. The eleven wooden triptych altars date from the late 15th century. The tower collapsed during the fire and earthquake of 1725, but was repaired. Then, after another fire in 1879, the building was completely redesigned in the Gothic Revival style. The facades were remodeled and the tower was rebuilt, receiving its signature pinnacled roof.

The fountain and statue of St. Florian in the square, beside the church, was erected to commemorate the fire of 1774.

The Old Town Hall, the oldest example of Early-Renaissance architecture in Slovakia, stands in the center of the square. Its high-stepped gables, steep-pitched roof and staircase oriels, dating from the early 15th century, form a terrific counterpoint to St. Egídia. A branch of the Upper Šariš Museum inside (Radničné nám. 48, tel.: 0935/6038, open Tue.-Sun., 8:00-12:00, 12:30-16:30) tells the story of Bardejov, punctuated by countless medieval artifacts.

Radničné námestie, the main square, is lined on both sides with wonderfully restored Gothic-Renaissance houses. Looking away from St. Egídia, the yellow and purple building on the left (No. 16) is the old school house - today's town hall, with its richly decorated Renaissance portal and the town arms displayed above. The colorfully painted facade on house No. 26, at the upper end of the square, dates from 1770. At the corner of Rhodyho ulica, stands another branch of the Šariš Museum in a Gothic building with a projecting Renaissance arcade.

The Icon Museum is just across the street. There you can check out fascinating 15th century religious icons, depicting the lives of Jesus and various saints. Don't waste 200 crowns for a photo pass; they sell snapshots of all the best icons at the ticket window.

When you've had your fill of icons, stroll around the walls encircling the town. These well-preserved fortifications were built in 1352 and beefed up during the Hussite movement of the 15th century. All bastions have historical plaques in Slovak and English. Continue down Rhody Street past the Gunpowder Bastion to the Lamp Column on the right, a cheerful commemoration to the very site where people condemned to death were beheaded.

Take a right on Jiráskova ulica and head for the twin onion domes of the 1902 Greek-Catholic Church of Saints Peter and Paul. Here Ruthenian parishoners carry on the orthodox tradition before a massive wall mural encircling the altar. Separate paintings of each of the Twelve Apostles, various other saints and The Last Supper are outlined in gold.

A right on Ulica Františkánov takes you to the Franciscan Monastery and church of St. John the Baptist, an original Gothic construction from around 1460. Nearby is the School Water Bastion, which protected the town water supply. Continue down Baštova ulica to the small park beside the Archival Bastion. Bordering the park is a music school named after the Bardejov composer, Vojtech Keller. This is the former Humanist School, mentioned above. Nearby on Dlhý Rad is the former Jewish suburb, with a synagogue and a cemetery.

Regardless of how satisfied you are with Bardejov, you can't leave without a visit to Bardejovské Kúpele.

Set in a narrow, wooded valley, this quaint spa resort retains much of its imperial vigor. The elegant Astoria Hotel is a classic example, with its yellow and bronze painted facade. The colonnade, across from the Astoria is a much less flattering, socialist-era building. Unfortunately entrance to many of the buildings is reserved for patients. However, beautiful grounds and the Ľudový Prameň (People's Spring) are open to the general public. At the spring, you can fill your water bottle with the naturally fortified mineral water for free.

Just behind the colonnade is the skanzen, or open-air museum of folk architecture, which is the highlight of any trip to Bardejovské Kúpele. Open year-round, the skanzen is a model village of 30 buildings from throughout the Šariš region. Explanations in Slovak and English are posted at the entrance to each building. The exhibit includes blue peasant houses, with stables and living quarters under one hay-bail roof; a wooden belfry from the Nemcovce village used to summon the inhabitants (It was even rung in hopes that the bell would disperse storm clouds. Wishful thinking.); a water driven "fuller" used to beat woolen cloth into shape; a grainery, a pig-sty; and two wooden churches. Admission is a modest 20 Sk for adults, 10 Sk for students and seniors, 5 Sk for kids, 40 Sk for guided tours (groups of 10 of more). Photo passes cost 200 Sk, video passes are 400 Sk.

The Ethnographic Museum next door is worth a quick peek, as well, mainly because of the religious wood-carvings. The most original is an upside-down tree trunk depicting The Fall of Man, with Adam and Eve under the apple tree in The Garden of Eden, while the serpent slithers through the tree limbs. Pottery, leather working, basket weaving and wood working exhibits are upstairs.

Outside, hiking trails spider off through surrounding forest, past neighboring villages, crumbling ruins, or to the top of 900-meter Magura Mountain. From there, all of northeastern Slovakia, including the Tatras, is visible. In winter, skiing on the hill behind the skanzen costs 150 Sk (all-day), 500 Sk (all-week), or 10 Sk (per run).

Those inspired by the wooden churches at Bardejovské Kúpele skanzen should head 10 kilometers south of Bardejov to the tiny village of Hervartov. The Church of St. Francis of Assisi, Slovakia's oldest wooden church (1500), pokes through the trees on a rise over the stream that runs through the village.

A sign on the door sends strangers to the caretaker's house down the road for a key. It's worth finding, as 330 year-old murals cover the wide wooden planks inside the church. You can even climb the ladder to the balcony for a closer look.