Stankovac, Macedonia: Ramadan Zeneli is still wearing the lavender sweatpants that were gashed one month ago when a masked paramilitary soldier put a knife to his leg and said he would kill him if he did not hand over 1000 Deutsch marks. Now, sitting on the plastic tarpaulin which lines the bottom of a hangar-size tent at Stankovac refugee camp in Macedonia, the 45-year-old Kosovar Albanian is one of the lucky ones. All 18 of his immediate family members are with him; the only losses are the grandparents of his daughter-in-law, who, too old to move quickly, were burned along with their family home. 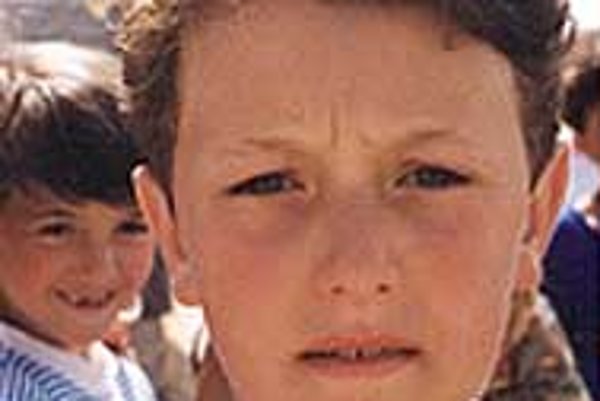 Font size:A-|A+  Comments disabled
Stankovac, Macedonia: Ramadan Zeneli is still wearing the lavender sweatpants that were gashed one month ago when a masked paramilitary soldier put a knife to his leg and said he would kill him if he did not hand over 1000 Deutsch marks. Now, sitting on the plastic tarpaulin which lines the bottom of a hangar-size tent at Stankovac refugee camp in Macedonia, the 45-year-old Kosovar Albanian is one of the lucky ones. All 18 of his immediate family members are with him; the only losses are the grandparents of his daughter-in-law, who, too old to move quickly, were burned along with their family home.

On May 25, the count of refugees who had fled from Kosovo into neighboring Macedonia stood at over 270,000. More were arriving at the border daily, telling similar stories of horror: how paramilitary and Serbian police had swarmed into their homes, separating men from women and demanding money. Some had seen neighbors on the tractor in front of them shot, or had had members of their own families killed.

At Stankovac I refugee camp, 15 minutes by car from the Kosovo border at Blace, 19,300 refugees live together on an old air field in a tent camp which stretches for nearly a kilometer. Inside, green, brown, and white tents are neatly arranged into rows and units, divided by food tents, medical facilities, and a basketball court. In the more settled parts of the camp, laundry flutters in the breeze between tents and shoes are lined up neatly on makeshift doorsteps. Where the new arrivals stay, 100 or more people often eat and sleep together in large tents on piles of gray blankets.

On this day, 44 busloads of new refugees are resting after their late-night arrival from the border. Most of them were evacuated from the capital of Kosovo, Pristina, in what they described as a final push by the Serbs to get most of the ethnic Albanians living in the city out. The new refugees said they know few who are left in the city, beyond the elderly and invalids. Everyone else has fled, either to the mountains or transport centers where trains, buses, and tractors were waiting to take them away.

"Everyday, when they know there is an Albanian family in the house, they come in and take money; even four times in the same day. Now in Kosovo, people just understand if you are Albanian, that's all, nothing else," said Daut Bogichi, 44, who had just arrived from Pristina with his extended family of 18. "We are more happy here than in Kosovo, because there when the door opened or the bell rang, the children began to cry."

"In Pristina, some people still have money to buy things, but they are afraid to go outside. Only the old people and women can go, the men will be taken away," said Habib Pacolli, 48, who fled carrying nothing with his four children, wife and parents. "I am very sad, very worried about the situation."

Many of the families evacuated from Pristina were already refugees from small towns and villages which had been terrorized or burnt. In transit for up to a year, some have not been in communication with the elderly people and relatives left behind.

Fitie Prelvukaj, 49, has not seen her parents for three months, since the police had blocked the road from their village of Rehovce to Pristina. When the buses of new refugees come to the camp, she walks over and watches for them, or asks other refugees for news.

In the rain May 23, she cried as dazed teenagers in Levis and mothers carrying babies stepped off the bus into an open dirt square. They quickly blend in with the rest of the scene. "My heart is breaking," Prelvukaj said. "Without my parents, there is no life for me."

In the camp are doctors and businessmen, taxi drivers and farmers. Some were wealthy in Kosovo, others poor. There are babies and children, old men and head-scarfed grandmothers.

Though the situation in Kosovo has worsened since the NATO bombings began, the refugees interviewed said they were strongly supportive of the campaign. At least now, they explained, they feel someone is helping them. In makeshift schools, children drew the compass-like NATO symbol along with heroic images of Kosovo Liberation Army soldiers carrying massive machine guns. Even the five-year-olds sang nationalist songs as they marched in neat lines to school through the camp.

Though many say they will go back to Kosovo as soon as they are able, they expect that it will be a free and independent country they will return to. Further radicalized by the atrocities of the war, some said they cannot imagine sharing the land with the Serbians again.

"Partition? That would not be good," said Javet Musliu, 42, referring to one international plan by which part of Kosovo would remain with Serbia. "There are too many people now in Kosovo, and 90% are Albanian. We can not be squeezed any tighter than we already are," the refugee said.

Others are now contemplating leaving for third countries which have offered to take the Macedonian-based refugees, as Macedonian officials, citing a deep economic crisis of its own, have said they cannot handle the influx. Yet many refugees hesitate, unwilling to leave when they have relatives still in Kosovo or missing.

Fisnik Gllava, 18, walked into Stankovac a month ago with his brother after leaving their parents with an aunt in Tetovo, a majority-Albanian city in Macedonia. With nothing to do in Tetovo and no idea of when he could return to his high school in Pristina or find a job, he told his parents he would try to get to America, he said.

But now at the camp, he has not yet bothered to apply for an evacuation. Now he is not sure of what kind of life he will have abroad, and can't decide where he should go.

"For me it is not a life here," he said in English. "I am not going to school. I am losing time. But how can decide when I have nothing?"

Though things often seem calm in the camp, mental health workers there said the refugees are inwardly struggling. Even children tell stories that an adult might find too much to bear.

Though she spent her day quietly at a UNICEF community center drawing idyllic pictures of fruit trees in Kosovo, 9-year-old Lume Hajdini can also explain how her father was killed in Pristina three days after the NATO strikes began.

Her classmate, Arta Kecekola, 11, from Pristina, explains how when she was evacuated, "the Serbians ordered us to make a line behind their tanks. When they saw we were carrying bread, they took the bread."

After six weeks at the camp, engineer Spend Shala, 47, is now on a list to go to Australia with his family. A few weeks ago, he swore he would return soon to Kosovo, but now he is no longer sure. He owned a peanut roasting plant with his brothers there, but he is certain it will have been destroyed. He left after a Serbian neighbor threatened him with a gun.

"I will see," he said, sitting in his steamy green US army-issue tent with his three children. "If it is better there (in Australia) , we will stay."