Bombs dropped by NATO warplanes on Yugoslavia and its Danube River supply routes are sending shockwaves through the economies of neighbouring economies. Slovak shipping and trading firms say that impasses on the Danube River and the economic isolation of Yugoslavia are costing them millions of crowns in lost revenues every day, and are demanding compensation.
"I've had to send 300 employees home and cut their wages back 40%," said Peter Murín, the head of import-export firm Chirana Prema, explaining that his firm has been unable to fulfill its contracts with its Yugoslav customers since the NATO bombing began on March 23. "Our losses stand at 5.4 million marks [120 million Slovak crowns] so far," he said. 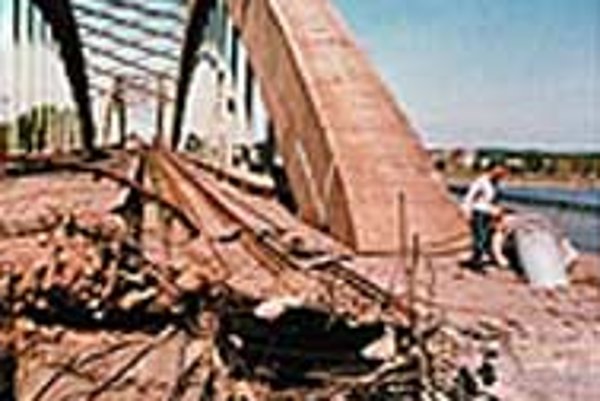 Font size:A-|A+  Comments disabled
Bombs dropped by NATO warplanes on Yugoslavia and its Danube River supply routes are sending shockwaves through the economies of neighbouring economies. Slovak shipping and trading firms say that impasses on the Danube River and the economic isolation of Yugoslavia are costing them millions of crowns in lost revenues every day, and are demanding compensation.

"I've had to send 300 employees home and cut their wages back 40%," said Peter Murín, the head of import-export firm Chirana Prema, explaining that his firm has been unable to fulfill its contracts with its Yugoslav customers since the NATO bombing began on March 23. "Our losses stand at 5.4 million marks [120 million Slovak crowns] so far," he said.

Economy Ministry officials say that as of May 13, major Slovak companies like oil and gas firm Transpetrol, aluminum manufacturer ZSNP and tire maker Matador Púchov had reported 570 million crowns ($13 million) in losses related to the Kosovo crisis. Many of these firms have registered their losses at the Economy Ministry, in the hope of compensation should any be forthcoming.

Ministry spokeswoman Alica Ďurianová said that no damages would be paid by the Slovak government, but that her ministry was trying to ascertain through the Ministry of Foreign Affairs if any international funds existed for compensation for Kosovo-related damages.

"The Economy Ministry will prepare material dealing with the losses of Slovak companies for the government, and it [the government] must decide what to do. The government hasn't made a decision yet," said Ďurianová. In the meantime, she said, the firms should record their losses carefully. "All records of damages and losses of these companies must be verified," she said.

Many of the firms which have suffered were involved in direct sales to customers in Yugoslavia before the conflict. Chirana Prema's loss, Murín said, came after the firm was cut off from its traditional customers for medical supplies. "I have sent several letters to the Economy Ministry suggesting possible solutions to our company's problems. Unfortunately, the government was only able to contribute 1.5 million crowns, which were used to pay for our syringes that were sent to the Balkans as a part of the government's humanitarian aid," Murín said.

Matador Púchov has also lost its Yugoslav clientele, once avid buyers of the firm's tires and rubber belts. "Our losses are over 100 million crowns, but as far as I know we do not intend to demand compensation from the state," said Jozef Kapec, manager for external affairs at Matador Púchov.

Other Slovak firms have seen their business activities in Yugoslav neighbours like Macedonia disrupted. "We prepared two contracts with our Macedonian partner, but neither of them has been completed, so our current losses are 16.5 million crowns," said Teodor Kvapil, manager for marketing and commercial services at ZSNP.

ZSNP was not asking for compensation, Kvapil said, because the firm regarded its loss as an unavoidable part of doing business in the former Yugoslavia. According to Kvapil, ZSNP was considering other methods of transporting its goods to Macedonia, including rerouting them through Bulgaria.

Still other firms have suffered collateral damages after the trade routes they normally use to customers in other countries were disrupted. Slovakia's only shipmaker, Slovenské Lodenice Komárno (SLK), has been unable to send finished ships down the Danube River to destinations on the Black Sea because of the collapsed Yugoslav bridges that are blocking the route. "Our losses so far are 114 million crowns [$2.5 million]," reported SLK General Director Milan Kopčok.

SLK sales manager Peter Hriň explained that his firm had built three ships, but that "we haven't sent them to their future owners so far because the Danube is impassible." Until the SLK received payments for these ships, he said, it could not continue to produce new vessels.

Kopčok estimated that his firm's losses would reach 280 million crowns in the next three months if the war continued, which was three to four times the planned figure for 1999.

And while the injured firms wait to be told if any international money is coming, most say they don't expect compensation from the Slovak government, which recently approved its second austerity package this year to bolster state finances. "There is no chance we'll get any money from the state because the government doesn't have enough money," said Chirana Prema's Murín.

But although it appears unlikely anyone will squeeze money out of the Slovak government for Kosovo-related damages, this hasn't stopped some firms from pushing the limits. Some Slovak companies, especially smaller firms, are hoping that the government will compensate their losses if they can show the state itself contributed to the damages.

A small beer brewery named TVZ from the eastern Slovak town of Markušovce told The Slovak Spectator that they had wanted for some time to build a brewery in Yugoslavia. TVZ asked officials at the Ministry of Foreign Affairs eight days before the Kosovo crisis began how likely it was that war would break out. Foreign Ministry officials, the firm said, gave them a 95% likelihood that it wouldn't start at all.

TVZ, buoyed by the reassurance, then launched construction of two breweries in Užice and Pagina, only to have NATO planes begin bombing days later. TVZ is now demanding compensation from the Economy Ministry.

"The compensation is just a gesture, though," said TVZ boss Peter Kovaľ. "The Kosovo affair has wiped us out completely."

On the other hand, travel agencies also say that they have been hard hit by the Yugoslav crisis, but stress they won't ask for compensation because their problems lie with people's perception that Croatia, a once-popular holiday destination bordering on Yugoslavia, has become a dangerous place.

"There are two factors influencing the fall in salability of trips to Croatia," said Jana Košubová, manager of the Slovak Association of Travel Agencies. "The first is that people consider Croatia as a part of Yugoslavia, and second is they think that Croatia is too close to the main centres of the conflict."

"Trips to Croatia are down 30 to 40% in comparison with last year," said Pavol Gašparík, head of the travel agency Globtour which focuses mainly on Croatia. Gašparík, however, linked the decline to Slovakia's precarious economic situation as well as to perceptions of Croatia as a war-torn country. "As far as we are concerned, these losses have nothing to do with the government."