Language law held up by squabble

If the cabinet fails to adopt the long-promised law on minority language use within the next few months, its hopes that Slovakia will be lifted into the first group of EU candidates at the Helsinki summit in late 1999 may fade away.
Despite the fact that the controversial law was expected to be approved in February, in-fighting in the ruling government coalition has prevented agreement on the law's final draft. The latest cabinet schedule sets July 9 as the date on which the draft should be approved, perhaps in a shortened legislative procedure, but recent problems have dimmed the likelihood of even that plan. 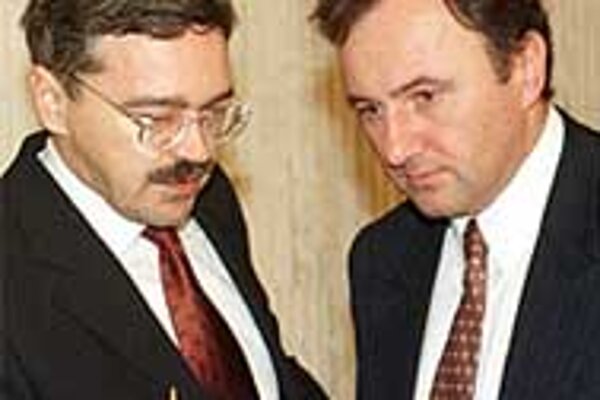 Font size:A-|A+0
If the cabinet fails to adopt the long-promised law on minority language use within the next few months, its hopes that Slovakia will be lifted into the first group of EU candidates at the Helsinki summit in late 1999 may fade away.

Despite the fact that the controversial law was expected to be approved in February, in-fighting in the ruling government coalition has prevented agreement on the law's final draft. The latest cabinet schedule sets July 9 as the date on which the draft should be approved, perhaps in a shortened legislative procedure, but recent problems have dimmed the likelihood of even that plan.

The language law would require that some government documents, such as school report cards and court paperwork, be officially acceptable in a minority language. Its passage has been a thorny political issue fraught with emotional rhetoric, as nationalists claim the law would undermine national sovereignty and the powerful Hungarian minority charges that the lack of such a law violates its rights.

The passage of a minority language law is considered by the EU to be the last major hurdle for Slovakia's consideration in the next round of entry. As a result, some are charging that the political interests of individual parties inside the coalition are dominating the country's integration efforts to a dangerous extent.

The Hungarians in government have been particularly critical of the law's delay. "The cabinet behaves just like its predecessors [in the government of former Prime Minister Vladimír Mečiar]," said Deputy Prime Minister Pál Csáky at a May 31 press conference of the Council for Minorities and Ethnic Groups. "If the government fails to reach an agreement," he said, "the July 9 deadline for passing of the law in parliament would be seriously endangered."

Csáky, who represents Slovakia's 500,000-member Hungarian minority in the cabinet as the vice-chairman of the Hungarian SMK party, warned that under the current deadline the coalition parties only had ten days to agree on the final version of the draft, due to additional legislative steps that would have to follow the deal. He urged the group to move forward, adding they would not find themselves in "better political shape" anytime later.

Disagreements about the details

Questions over the proposed text of the law have been a major cause for the delay, with the Hungarian SMK party pushing for a stronger version of the law than the other coalition parties are willing to accept.

In the SMK version, a minority could apply to use their language for official purposes, such as in courts, in other purposes of public administration, and on school report cards, if they comprised a minimum 10% of the citizens in a town or village. Under this plan, entrance exams to high schools and universities would also be held in the minority language.

Other members of the coalition disagree. The representatives of the powerful reformed communist SDĽ party and the more minor SOP (Party of Civic Reconciliation) party claim that entrance exams to high schools and universities should only be held in the Slovak language. Further, they say that the bottom-level limit for the application of the law in municipalities with a mixed population should be set at 20%.

According to both sides' proposals, the minority citizens will also be allowed to appeal to the Government's Office, the Parliament's Office and the President in their mother tongue. The law would apply to Slovakia's four main minority groups - Hungarians, Ukrainians, Germans and the Romany ethnic group.

While Csáky charges that politics will prevent the law from moving forward, others are more positive that the coalition will meet the latest language law deadline. At the very least, they say, the government will pass the law by late September, in time to include it in Slovakia's application for EU membership in Helsinki in December.

"It's just a matter of one session of all coalition partners and that's it (the problems would be solved)," said Juraj Hrabko, Director of the Section of Minority Affairs and Human Rights at the Government's Office and former SMK candidate.

Deputy Prime Minister Pavol Hamžík of the SOP was also upbeat, despite the fact that he announced two weeks ago that the law would be approved May 31. "We didn't miss anything final yet, the agreement is close to being reached and it will come soon," he told The Slovak Spectator on June 1.

Hamžík said that the government's goal was to approve "a well-shaped law that people would benefit from", and that the deadlines and time schedules were of secondary importance. "The warnings about missing deadlines are just a part of Mr. Csáky and the SMK party's strategy, but nothing is really endangered now."

According to Hamžík, the SMK party is "obviously pushing through its own interests". He underlined, however, that the agreement would have to be achieved by all four parties of the coalition, which would make all involved parties, including the Hungarians, re-assess their demands.

While a difficult question at home, the international ramifications of a delayed law might actually be more serious. Foreign Minister Eduard Kukan recently expressed concern about Slovakia's integration chances if it fails to adopt the draft. "If Slovakia avoids fulfilling this last political criterion, it will not be accepted in the first group of EU candidates," Kukan told the news agency SITA on June 1. "Slovakia cannot rely on EU understanding if it fails to meet this requirement."