After months of delay in obtaining construction permits, securing bank loans and negotiating the future of eleven of Bratislava's oldest trees, the reconstruction of Bratislava's historic Hotel Carlton has finally begun. Bratcarl a.s., a Slovak firm with Belgian shareholders, started its makeover of the national landmark on May 3 and expects to finish the project, at a cost of over 1.5 billion Slovak crowns ($30 million), by April 2001 at the latest.
"The Carlton Hotel is a symbol of Bratislava," said project architect Vladimír Vršanský. "That's difficult to understand today because everything is now destroyed. But between World Wars I and II, it was very well-known, not only in Bratislava and Czechoslovakia, but in all of central Europe. It was the best hotel." 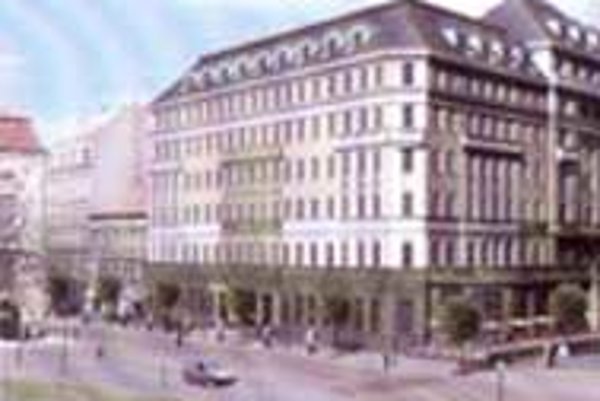 Font size:A-|A+  Comments disabled
After months of delay in obtaining construction permits, securing bank loans and negotiating the future of eleven of Bratislava's oldest trees, the reconstruction of Bratislava's historic Hotel Carlton has finally begun. Bratcarl a.s., a Slovak firm with Belgian shareholders, started its makeover of the national landmark on May 3 and expects to finish the project, at a cost of over 1.5 billion Slovak crowns ($30 million), by April 2001 at the latest.

"The Carlton Hotel is a symbol of Bratislava," said project architect Vladimír Vršanský. "That's difficult to understand today because everything is now destroyed. But between World Wars I and II, it was very well-known, not only in Bratislava and Czechoslovakia, but in all of central Europe. It was the best hotel."

Once a jewel of regional architecture, the Hotel Carlton has not hosted guests since the end of the 1980's. According to Bratislava Old Town spokesman Milan Vajda, the hotel fell under the ownership of a group called Inter Hotel, which was dissolved in 1989. The former Czechoslovak government then assumed ownership and passed the Carlton on to a succession of state ministries. The hotel was offered to investors through two separate tenders, Vajda said, the first of which failed.

Project officials now hope that the Hotel Carlton, buoyed by the finances of Bratcarl and the construction know-how of Belgian firm Cotecno, will be resurrected as both an elite hotel and as a recognised national monument.

"The hotel will be a classic five star hotel," said Bratcarl Chairman G.G. Vaneyck. Vaneyck said the new Carlton will be a modern structure that maintains the historical characteristics of its predecessor. "We want to re-establish the hotel with a beginning-of-the-century style. The look will stay the same and the shape will stay the same," he said.

The new Carlton will keep its facade, and almost everything inside the hotel will be redone. Project organisers said they had wanted to build a "modern building," but added that the historical significance of the hotel and the memories it provides for Bratislavans and tourists alike compelled them to leave the view from Hviezdoslavovo square unchanged. Concern for nostalgia will even mean the re-opening of the Savoy, once a popular coffee shop on the ground floor of the hotel.

The new Hotel Carlton will have 165 rooms, 11,500 square metres of leasable office space, a "Congress Center" for conventions, two large halls - the "Carlton Hall" and the "Mirror Hall," which will also be reconstructed in their classic forms - and, pending the outcome of negotiations, a bank.

Cotecno's project manager Eric Vandezande explained that the project began months ago with the bracing of the facade, which was necessary to avoid collapse once the rest of the hotel was demolished. "The bracing took over four months," he said. Once the process was completed, the demolition of the hotel began. "The next step is to remove all the rubbish from the [demolished sections], which will take about 15 days," Vandezande said on June 2.

Vandezande added that he and his crew of 20 Slovaks and six expatriates would then bring the site into compliance with health and safety regulations, followed by the laying of foundations and the subsequent "floor-by-floor construction," which will ultimately reach seven storeys for the hotel and eight for the office space in the back.

The ground floor of the hotel will be used as a commercial area, said Vaneyck, hosting an array of smaller shops, restaurants and cafés. Vršanský said that the old Savoy would be refurbished and assume its former location on the north-east corner alongside the more modern stores, cafés and restaurants.

Vršanský said that the biggest problem the project had faced was addressing the lack of existing parking space. According to the architect, a hotel of Carlton's size, combined with business offices and various other stores, would need approximately 350 parking places. While building a garage under the hotel itself was not impossible ("anything is possible," he said), the expense and length of construction made the idea unfeasible.

The parking issue seemed to have been solved when the team decided to build a 450-car parking lot below Hviezdoslovovo Námestie, scheduled to be completed next year by May 31. But the construction of the garage hit a snag last year when it was determined that eleven trees on the square would have to be cut down to make room for it. According to Vajda, Bratislava Mayor Jozef Moravčík ordered the trees to be relocated for the duration of the project and then re-planted upon completion.

Bratcarl's Vaneyck balked at the mayor's decision, saying that relocating the trees was tantamount to destroying them. "Even with the best technology there is only a certain success ratio," he said. "Some of the trees were either dead or diseased. and the many studies we did predicted that only four or five would survive."

A compromise was eventually reached, Vaneyck said, when the Mayor agreed to allow the trees to be cut down under certain conditions, the most important being that Bratcarl would plant five new trees for every one the firm cut down.

As a result, the square will soon take on a greener appearance than it previously had. The Old Town's Vajda added that the 55 new trees scheduled to be planted might even be arranged into an L-shaped "tree park" stretching around the square to the Danube River. Vaneyck agreed that this was a possibility, but said that a final decision had not yet been made. He maintained that the surface of the square would not be changed by the garage construction.

When asked why Bratcarl had bucked the trend established by their 51 predecessors, Vaneyck said, "we believe in the project - it is a great opportunity. We had some problems convincing the banks to give us enough money, for example, but we were able to solve everything."

Investors may have been scared off in the past, Vršanský added, because of the sheer price of the project. Vaneyck, for his part, said that cutting through the red tape involved in obtaining the necessary permits had been Bratcarl's biggest obstacle.

"We had envisioned hosting our first guests on the eve of the new millennium," he said. "But we had many problems concerning the permits, so now that won't be possible."