If the government hoped that direct presidential elections would improve Slovakia's political stability and international credibility, these hopes have been dimmed by the recent misbehaviour of one of the ruling coalition's strongest members - the former communist SDĽ party.
SDĽ party members have spoken out in the past week - against their Hungarian coalition partners, against the government's planned economic reforms, against each other - and while their government colleagues publicly maintain the pretense of unity, political professionals say that tensions within the cabinet are at an all-time high. 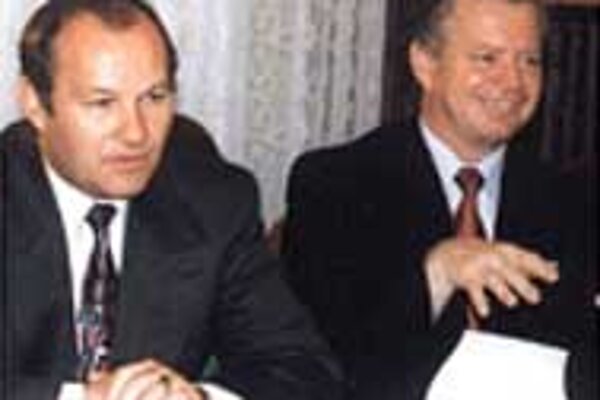 Font size:A-|A+  Comments disabled
If the government hoped that direct presidential elections would improve Slovakia's political stability and international credibility, these hopes have been dimmed by the recent misbehaviour of one of the ruling coalition's strongest members - the former communist SDĽ party.

SDĽ party members have spoken out in the past week - against their Hungarian coalition partners, against the government's planned economic reforms, against each other - and while their government colleagues publicly maintain the pretense of unity, political professionals say that tensions within the cabinet are at an all-time high.

"The partisan interests of the SDĽ tend to take precedence over the interests of the country and its citizens," said Ľuboš Kubín, a political scientist with the Slovak Academy of Sciences. "The SDĽ is doing exactly what the HZDS party [of former Prime Minister Vladimír Mečiar] did over the last four years, albeit in a more moderate fashion."

Not toeing the line

Agriculture Minister and SDĽ member Pavol Koncoš was the first to shake the image of cabinet unity when he announced on May 24 that he would not support the long-awaited package of economic reforms, including price and tax hikes, that the cabinet had vowed to apply as of June 1.

Koncoš' statement came only hours after Prime Minister Mikuláš Dzurinda had assured the public that all four coalition government parties stood behind the reforms.

According to Kubín, Koncoš and the SDĽ were trying to win votes by appearing to defend the average Slovak voter against the right-wing and free-market advocates within the government.

"It's clear that the SDĽ party is already preparing for the next elections, and as the strongest leftist party in Slovakia, it may even expect to win," he said.

Hard on the heels of Koncoš' rebellion came an article written for a national newspaper by SDĽ parliamentary deputy Róbert Fico, who lashed out at the ethnic Hungarian SMK party for its "regional" and ethnically-based politics.

Fico accused Hungarian cabinet ministers and parliamentary deputies - his government colleagues - of polarising Slovak society over minority issues, such as the approval of the law on the use of minority languages, and thus feeding nationalist and extremist trends in the country (see Guest Column, page 11).

The SMK party, for its part, said that Fico's article was an attempt to destabilise the coalition. "His way of thinking is at a level of a three-year-old boy from the logical point of view, but from the political point of view, his intent is clear," said László Gyurovszký, SMK deputy chairman.

Kubín explained that Fico's words had been aimed less at creating political turmoil than at positioning himself for a run at the SDĽ party leadership and wider support from ethnic Slovaks in the next elections. "The latest polls done by the Statistics Office show that Fico is the most popular SDĽ politician, so it's no surprise that he aims to be the next party chairman," Kubín said.

Senior SDĽ officials, however, were careful to distance themselves from Koncoš and Fico, insisting that the party will honour the terms of the coalition agreement it signed with the other three government parties, whatever its electoral ambitions.

"Yes, the election campaign lasts for four years, basically until the next national elections," SDĽ Deputy Chairman Peter Weiss told The Slovak Spectator on May 26. "The SDĽ, however, is committed to following its election programme, which has become a part of the cabinet programme."

Weiss said that Koncoš' statements "is his own personal opinion," and did not reflect official SDĽ policy, which was to support government decisions. He also railed against Fico for showing "bad timing, just before presidential elections," and said that Fico's words "were beneath someone of his intellect."

Weiss also blamed the Slovak media for "ideologizing" the statements of his party mates, saying that "for some media the SDĽ party has become a punching dummy. But we won't allow anyone to label us with anything."

As damaging as Fico's broadside was, Kubín said it was far less revealing of SDĽ strategy than the party's posture on the economic package.

Since the beginning of the year, the SDĽ has refused to countenance increasing the VAT tax rate, something it says would harm citizens; this argument was repeated by Koncoš on May 25. Instead, the party has argued, an import surcharge should be imposed to bring added revenue into the state budget in a manner that is less painful for society.

Opposiong the SDĽ all the way has been Deputy Prime Minister for Economy Ivan Mikloš, who has insisted that an import duty would damage Slovakia's reputation in the international business community and lower the country's chances for membership in the OECD.

Mikloš' party, the Democratic Party (DS), accused the SDĽ recently of having lowered the living standards of the voters they claimed to protect by consistently shying away from economic restrictions necessary to save the economy. "Now it's clear to everyone that backsliding on reforms was wrong, and that implementation of a restrictive regime was inevitable," said DS leader Ján Langoš on May 13.

The SDĽ's Weiss defended his party, saying that it was Mikloš' fault that a mere 30% of the measures in the January austerity package had been fulfilled.

"The SDĽ party is always being blamed for all the mistakes. Why do people only talk about the VAT hike? Why, when the cabinet decided to re-impose the import surcharge [on May 19], did no one ask why the SDK had so stubbornly rejected the import surcharge before? We could have achieved a compromise several months ago," said Weiss.

But according to Kubín, the SDĽ's foot-dragging on economic reforms had its roots in politics rather than in the party's social conscience.

"There is a certain wing inside the SDĽ party which is counting on the possibility that the government won't succeed in getting the country out of trouble," he said. "This grouping would be able to grab the support of those voters who will turn away from the government."