The April nomination of Slovak Foreign Minister Eduard Kukan as one of two special UN envoys responsible for solving the Kosovo crisis has been hailed as a coup for Slovak diplomacy. Kukan is to start his mission, in partnership with fellow-envoy and former Swedish Prime Minister Carl Bildt, after the United Nations Security Council adopts a resolution on Kosovo.
US Ambassador to Slovakia Ralph Johnson said that the appointment not only "shows the level of confidence everyone has in Eduard Kukan," but that it also signalled Slovakia's growing political maturity as a country. "I cannot imagine that Slovakia, whoever was foreign minister, would ever have been picked to play that role a year ago," Johnson said. 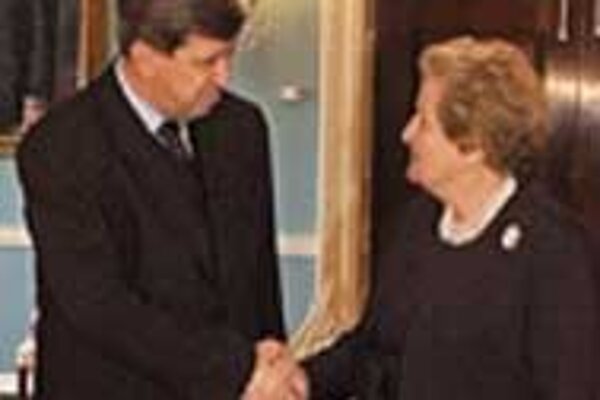 Font size:A-|A+  Comments disabled
The April nomination of Slovak Foreign Minister Eduard Kukan as one of two special UN envoys responsible for solving the Kosovo crisis has been hailed as a coup for Slovak diplomacy. Kukan is to start his mission, in partnership with fellow-envoy and former Swedish Prime Minister Carl Bildt, after the United Nations Security Council adopts a resolution on Kosovo.

US Ambassador to Slovakia Ralph Johnson said that the appointment not only "shows the level of confidence everyone has in Eduard Kukan," but that it also signalled Slovakia's growing political maturity as a country. "I cannot imagine that Slovakia, whoever was foreign minister, would ever have been picked to play that role a year ago," Johnson said.

At the moment, Russian emissary Viktor Chernomyrdin and Finnish President Martii Ahtisaari are trying to broker a political settlement to the Kosovo crisis, as well as to secure Yugoslav leader Slobodan Milosevic's agreement to a UN-led peacekeeping force in Kosovo.

Kukan has said that Slovakia will likely send troops to participate in any eventual UN peacekeeping force, and has also said that up to 40 Slovak army engineers may be sent to Albania to improve infrastructure there if parliament gives the necessary approval during its June session.

So far, the Slovak government has allocated 80 million Slovak crowns ($1.8 million) for aid to Kosovo - 40 million crowns for housing Kosovo Albanians in Slovakia, and another 40 million crowns on sending supplies to Albania and Macedonia. Four special flights organised by the Defense Ministry and carrying tents and blankets have left for Macedonia from Bratislava.

Kukan's recent appointment has vaulted him into the world's highest diplomatic echelon. In New York on May 19, he met UN Secretary General Kofi Annan and other UN top officials, along with the head of Yugoslav mission to the UN, Vladislav Jovanic. Later, in Washington, he led talks with US Secretary of State Madeleine Albright, and in Moscow on May 20 he met the head of Russian diplomacy, Igor Ivanov.

The Slovak Spectator asked Kukan on May 24 for his views on the Kosovo conflict.

Tthe Slovak Spectator (TSS): From May 19 to 20, as one of two UN Envoys for Kosovo, you took part in a series of important talks in Washington and Moscow on the Kosovo crisis. How would you evaluate these talks?

Eduard Kukan (EK):These talks gave me a much deeper understanding of the whole situation, and will help me to fulfill the role given to me by the Secretary General of the UN [Kofi Annan] more actively and concretely in the future. These talks also generated a greater mutual exchange of information among the big players in the conflict, and more effective co-ordination between the activities of negotiators like Mr. [former Russian Prime Minister and currently Kosovo envoy Viktor] Chernomyrdin, Mr. [President of Finland and Kosovo envoy Martii] Ahtisaari, Mr. [former Prime Minister of Sweden and now UN envoy to Kosovo Carl] Bildt and I.

[The talks also outlined] the way we should act in order to avoid complicating the situation... These were the main contributions of these talks.

TSS: What do you think will be the most important part of any solution to the Kosovo conflict?

EK: At this stage, the most important element is the preparation of a UN Security Council resolution based on the official report [on Kosovo] of the G8 countries [the world's most important economic powers] during their talks in Germany at the beginning of May .

If this resolution is accepted, it will point the way towards a concrete solution... of the [Kosovo] situation. Another burning question is how to achieve what some countries have been demanding, which is the suspension of air strikes together with the withdrawal of Serb troops from Kosovo. Reaching these two things [the UN resolution and the cessation of air strikes] is the most important task of current negotiations.

TSS: Do you think that the NATO air strikes could be suspended before the UN resolution is accepted?

EK: If we succeed in finding a means of withdrawal [of Serb troops from Kosovo] that is controlled and verifiable, we cannot exclude this possibility.

TSS: You were in Washington for talks on May 19, and then in Moscow for another round of discussions on May 20. How far apart are the Russians and Americans on Kosovo?

EK: There are different opinions [on the two sides], but both partners have been talking intensively. Although their opinions are far apart and talks are difficult, we can see their interest in coming to a decision - even small steps eventually bring one to one's destination.

TSS: How has Slovakia's role in the Kosovo crisis been viewed by NATO and by the other participants in the resolution process?

EK: The members of NATO consider it as undoubtedly positive, and appreciate, I would say, the clear, consistent and permanent attitude of the Slovak government. The government was asked by NATO for certain things [such as permission for NATO troops, equipment and airplanes to use Slovak airspace and territory], and fell in with its [the alliance's] wishes from the beginning of the conflict. This attitude [of compliance] has consistently been demonstrated by the Slovak government. Of course, the opinion of the Yugoslav government [on the behaviour of Slovakia] is totally different.

TSS: It is interesting that the number of Kosovo Albanian refugees who elect to resettle in Slovakia is quite small in comparison with those who want to go to other countries. Does this imbalance say anything about Slovakia's international reputation?

EK: I think that Slovakia has established several arrangements which prove that it is a reliable partner for the members of NATO, and it has done everything to win international credibility and to maintain it.

TSS: In the last two weeks, the Slovak government has been involved in talks on sending a squad of Slovak engineers to the Balkans. How will these engineers be employed, and where will they be stationed?

EK: This engineering squad would be sent to Albania, where an international group has been created consisting of members of various armed forces. This group should help the Albanian government secure basic living conditions for Kosovo refugees.

It is important to remember that this force would operate only in Albania, as AFOR [Albania Force], and our engineers would put up tents, build temporary shelters and roads and bridges which the Albanians need for better co-ordination between the refugee camps.

Our engineers would be engaged in exclusively humanitarian aid and activities. They are known to the UN and NATO because in the past, they co-operated on a similar project in eastern Slavonia with Belgian troops, and the Belgians are interested in co-operating with our engineers again, and would like to have them in their contingent.

During one of my visits to Geneva, I attended a conference under the leadership of the Secretary-General of the UN, where the High Commissioner for Refugees, Mrs. Sadako Ogatto, spoke of the need to send engineers to the Balkans, so that's why we want to send our engineering squad there.

TSS: Are you considering sending any other Slovak troops to the Balkans, and if so, which ones?

EK: [We are not considering this] so far, but if there is a collective political solution to the crisis, and it is clear that some international force must be placed in Kosovo, in other words a force to oversee the peace process there, then I think that at that time we can consider another mission for Slovak forces. Once again, I repeat that this could be only after the acceptance of a UN resolution allowing such forces to take part in operations for the purpose of peacekeeping.

TSS: Is Slovakia helping, or does it intend to help, the Slovak ethnic minority living in the north of Yugoslavia, in the area of Vojvodina?

EK: Yes, around one hundred children have been brought to Slovakia. It [the airlift] is being organised by the Red Cross and the Slovak government, which contributed two million Slovak crowns [$45,000]. These children are from an area where a refinery was hit by a missile. They were living in a very bad environment, so this was the contribution of the Slovak government. Of course, if we discover that our compatriots need help, the government is willing to evaluate the situation and render assistance.