WORK on the roof and infrastructure of the Chatam Sofer memorial did not begin last week as was announced but was delayed by bad weather.
"Climatic reasons prevent us from continuing the reconstruction," explained Martin Kvasnica from Studio FOR agency which is conducting the architectural part of the project at the south exit of tram's tunnel in the Bratislava's Old Town. 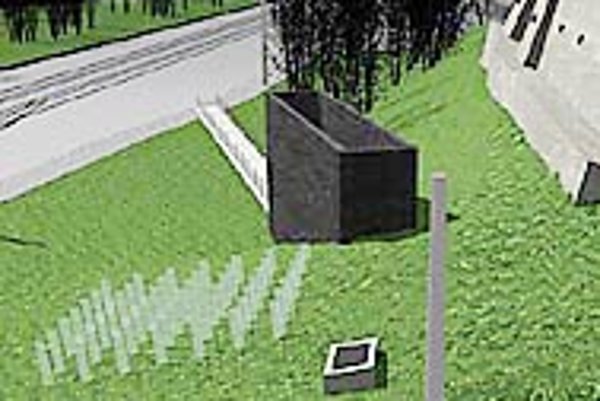 Font size:A-|A+  Comments disabled
WORK on the roof and infrastructure of the Chatam Sofer memorial did not begin last week as was announced but was delayed by bad weather.

"Climatic reasons prevent us from continuing the reconstruction," explained Martin Kvasnica from Studio FOR agency which is conducting the architectural part of the project at the south exit of tram's tunnel in the Bratislava's Old Town.

Kvasnica dismissed fears that the memorial had run into financial difficulties. "Investors paid for all expenses and so far 80 percent has been covered," he said adding that after this delay the reconstruction should be finished within the next two months.

Chatam Sofer (1762-1839), is Bratislava's most famous rabbi. He is world renowned for his comments on the Talmud and Tora, and the founder of conservative Bratislava's yeshiva (religious school).

Romi Kon, the head of the New York-based international committee, devoted to Sofer's beliefs and teachings, came to Slovakia in 1998 to prepare the ground for the project. Kon's negotiations with the town representatives resulted in the so called Memorandum on Understanding signed in 1999 in Bratislava's town hall. Both sides agreed on the town's responsibility for moving the trolley car tracks away from their route above the memorial and backed the Jewish community's project.

The reconstruction finally began in May 2001 after $750, 000 once were given by the town representatives so that the tracks could be moved and work continued until the end of August when the international community donated further $290, 000. But work ceased in September because of "misunderstandings between community members," according to Romi Kon.

But today constructors are optimistic. "The first and the second phase of the project, construction of the rough part of the memorial, are finished. Now follows interior, fencing, surrounding and park. We do not expect any further problems, we have a great support from the town officials, and especially Martin Bútora, the Slovak ambassador to the United States " said Martin Kvasnica.

Peter Salner, the head of the Jewish community in Bratislava, is satisfied with the ongoing reconstruction and hopes it will continue. He said: "Of course the biggest problems were financial. The architects also had to cope with very complicated and very strict requirements that Judaism proposes for graveyards and the preservation of the peace of people buried there.

"The most important thing was to preserve the inviolability of graves. You see, if human relics were found during the works, the whole thing had to be stopped - until the body is buried some place else."

Studio FOR has experience in constructing buildings for religious purposes and this is not the first project they have completed for the Jewish community. The best known is a kosher restaurant they made in the Jewish community complex at Kozia street 18.

However, the burial requirements were the main problem and caused friction both within the Jewish community and in Kvasnica's studio.

"The problem is of pure philosophical nature," commented Salner. Discussions were held with the London-based Orthodox Committee for the Preservation of Jewish Cemeteries in Europe, who held a demonstration soon after the beginning of reconstruction. "They stress the importance of the graveyard itself, while the international committee stresses the importance of rabbis buried there, so for them that is more an issue of aesthetics. Since the construction has been monitored by the religious committee from Jerusalem, I think that all sides should be satisfied," he added.

The reconstruction of the memorial may also symbolise the possible beginning of revival of Jewish heritage and tradition devastated by fascism and decades of neglect under communism. At the end of 1943, a road was built through the tunnel and above the old Jewish graveyard where rabbi Sofer was buried. The relics from every grave had to be carefully wrapped and buried in a mass grave in another graveyard.

"This is the first renovation of Jewish cultural heritage since the splitting of Czechoslovakia, but certainly not the first project realised - along with the kosher restaurant we renovated the house for elderly victims of holocaust." said Salner.

Financial difficulties and difficulties with ownership within the Jewish community mean that they are some 590 Jewish graveyards still waiting to be renovated.

"The so called SOS association, established within the Community should put things in order," hopes Salner. "We are interested in renovating the synagogue in Sväty Jur, the only preserved place where rabbi Sofer worked, and it would be great to renovate Bratislava's yeshiva, together with the synagogue in Lučenec, one of the biggest in Central Europe."

The Jewish community believes that the citizens of Bratislava are happy to have a memorial symbolising the multiculturalism of the town and its rich, but neglected heritage. Apart from the disruption to the tram route the project has run smoothly. Nor has there been any sign of anti-Semitic graffiti near the monument. "I had bigger problems with Jewish community than with anti-Semitic groups," laughed Salner.

The main purpose of the memorial will be to serve its religious needs. It is hoped it will provide believers with enough space to pray and meditate.

"We will of course allow tourists to visit, but would like to try to avoid the situation similar to one at the Old Cemetery in Prague's centre. There is no privacy at all, tourists who pay walk around, there are no conditions for undisturbed praying," said Salner. The international community has also provided money for the construction of centre with facilities to satisfy pilgrims' and visitors' needs.

The tram station at the Nábrežie L. Svododa, named after Chatam Sofer, will symbolically lead future pilgrims and tourists to the memorial.