BRIGITA Schmögnerová has promised to resign from her post as Finance Minister, averting a potential coalition crisis.
Having lost the support of her party, the Democratic Left (SDĽ), she said on January 23 she had taken the decision to step down.
Reiterating statements she made just a day earlier, she said she had "no wish to be a source of crisis within the government". 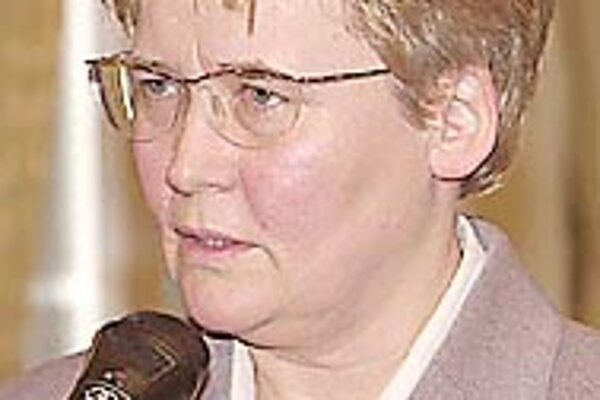 Having lost the support of her party, the Democratic Left (SDĽ), she said on January 23 she had taken the decision to step down.

Reiterating statements she made just a day earlier, she said she had "no wish to be a source of crisis within the government".

Schmögnerová, whose resignation had been demanded by the national council of the SDĽ but rejected by Prime Minister Mikuláš Dzurinda just 24 hours earlier, said she would officially step down on January 28.

She was expected to be replaced by František Hajnovič, a central bank official nominated to the post by the SDĽ.

Her step-down ended what had threatened to be a dangerous rift in the five-party coalition.

Following PM Dzurinda's refusal to accept the SDĽ's proposal to replace her, SDL leader Pavel Koncoš said the party would stop cooperating with other government parties, and threatened a worst-case scenario of pulling out of the coalition.

The proposal by the SDĽ to remove its own minister came at a January 19 meeting of the party's national council. Schmögnerová's support for a number of unpopular economic measures, including recent legislation on declaring property for taxation, had damaged the party's voter preferences, argued Koncoš and other senior SDĽ officials.

Under the coalition agreement governing the workings and relations between parties within government, only the SDĽ can put forward nominees for the post of Finance Minister.

The demand for the minister's recall was unexpected and viewed by some other politicians and analysts as a purely political move which could negatively affect reform in Slovakia.

"When making this proposal the SDĽ demonstrated that it puts its own interests over those of the government or of the citizens of this country. Their party agenda is much more important to them than any real policies," said Grigorij Mesežnikov, president of the Institute for Public Affairs (IVO).

"This will not help them win back support. Their low preferences are not the result of just the actions of the Finance Minister.

"This could be a threat to reforms. Koncoš has openly said that the party's main goal now is to stop the unpopular steps which have been taken by the government. That for him means stopping any reform."

The analyst added: "They want to stay in government but their recent actions, including those in recent regional elections and their proposal on the SPP privatisation [see related article, this page] suggest that they may be planning cooperation with the opposition HZDS after the next elections."

Schmögnerová has been seen by many foreign investors as a symbol of pro-reform stability in government. Named as Finance Minister of the Year by Euromoney magazine in 2000, she has also been courted by a number of foreign financial institutions.

Her work alongside Deputy Prime Minister for the Economy Ivan Mikloš, including support for unpopular economic austerity packages, design of legislation to improve the business environment and privatisation of the banking sector, has been seen as key to attracting new investment and stabilizing the economy.

Foreign economists said, however, that her removal would not necessarily affect investor confidence in the country. Just eight months before parliamentary elections, many saw the room for further economic reforms as very limited.

"Schmögnerová has carried out pretty much all the reforms, there was no great scope to carry out any major reforms in the last months leading up to the elections, and it's good that she stayed so long," said Jeff Gable, an analyst at Deutsche Bank.

"I also don't see any real risk of going back on the reforms that have been carried out. A lot of the economy is now out of the government's hands. There is a wide cross-party understanding of the need to keep Slovakia among the leading EU accession countries. No one is going to get up on a soap box and throw out policies that might go against this."

He added: "Eight months away from what is going to be a fairly exciting election we can see that the run-up to that election has already begun."

However, the government will soon have to address a challenge from the SDĽ to the country's largest privatisation - that of gas utility Slovenský plynarenský priemysel (SPP).

At the same council meeting that called for Schmögnerová's recall, SDĽ leaders said they wanted only 24 per cent of SPP shares sold to a new investor, and declared the government's current offer of a 49 per cent stake to a strategic investor to be against the interests of Slovak citizens.

The privatisation process officially began in late August 2001 and is expected to be closed within the next few months. Analysts agree that changing the conditions of the sale now would damage Slovakia's credibility.