INFLUENTIAL right wing politicians have proposed a plan to unite before autumn parliamentary elections to offer voters what they describe as an alternative to popular opposition leader Vladimír Mečiar.
Prime Minister Mikuláš Dzurinda, head of the ruling Slovak Democratic and Christian Union (SDKÚ), spoke of the need for a right wing bloc on private station Rádio Twist on January 21.
"The clock is ticking and it's about time that all responsible politicians in our country said a clear word. I have. The word is 'right wing bloc', and it's a winning alternative to the HZDS [Mečiar's Movement for a Democratic Slovakia party]," Dzurinda said. 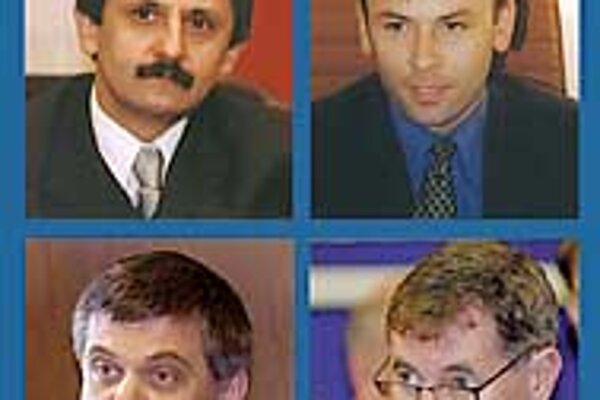 Font size:A-|A+0
INFLUENTIAL right wing politicians have proposed a plan to unite before autumn parliamentary elections to offer voters what they describe as an alternative to popular opposition leader Vladimír Mečiar.

Prime Minister Mikuláš Dzurinda, head of the ruling Slovak Democratic and Christian Union (SDKÚ), spoke of the need for a right wing bloc on private station Rádio Twist on January 21.

"The clock is ticking and it's about time that all responsible politicians in our country said a clear word. I have. The word is 'right wing bloc', and it's a winning alternative to the HZDS [Mečiar's Movement for a Democratic Slovakia party]," Dzurinda said.

With the five parties that make up the wide-spectrum ruling coalition holding around 35 per cent voter support, down from over 60 per cent in the 1998 ballot, a pre-election bloc is seen as key to the fortunes of the West-oriented parties that oppose Mečiar.

Political analysts, however, say that if a right wing alliance is to make headway with voters, its backers have to make a move soon.

"It's high time to stop talking and start acting, they shouldn't waste any more time," said Grigorij Mesežnikov, head of the Institute for Public Affairs think tank in Bratislava.

The strongest unity backers are Dzurinda and Kaník.

With western diplomats dropping heavy hints recently that a return of Mečiar could see Slovakia again cut from Nato and European entry short lists, the Prime Minister spoke of a right wing bloc as a means "to defeat Mečiarism once again so Slovakia doesn't go astray".

Kaník claimed he was "glad that Dzurinda has finally realised the need to unite the right wing. We've been talking about that for over a year now." He added that opposition to Mečiar was longer as unifying a political force as it had been four years ago, when five parties with vastly different platforms united under the Slovak Democratic Coalition to knock the HZDS from power.

"This [anti-Mečiarism] is no longer an issue strong enough to motivate voters. That's why we have to unite to promote concrete right wing ideas."

Other right wing leaders, however, have seemed more tentative about the project.

Bugár said that "if such a bloc is created we are ready to discuss it as well as what the role of the Hungarian Coalition Party might be."

Another possible partner, the tiny Civic Conservative Party (OKS), was also cautious. "We don't rule out cooperation, but we'll wait to hear what the other partners say," said OKS leader Peter Tatár.

Ano's Rusko did not dispute the need for unity, but criticised Dzurinda for spilling his idea to the media before addressing potential political partners. He added that "for the bloc to make sense, it should unite all right-of-centre parties," and singled out the Christian Democrats as missing from the roster.

Convincing the Christian Democrats to endorse closer ties, however, is likely to prove difficult. The party's leader, Pavol Hrušovský, said the Christian Democrats had still not recovered from a bad experience in the last unity project, the Slovak Democratic Coalition, when Dzurinda had pushed member parties give up their identities.

The Christian Democrats, Hrušovský said, wanted to compete independently in 2002.

Experience under the Slovak Democratic Coalition has left bad blood with Tatár's OKS as well. "We are open to cooperation with right wing parties, but in a right bloc we would demand a consistent reform policy. The Dzurinda cabinet has sometimes come close to doing many things we criticised Mečiar for - unfair political practices and corrupt behaviour," Tatár said.

But Mesežnikov argued that concern that a political return by Mečiar could dash the country's western integration hopes could provide the necessary impetus for unity.

Occasional comments from the West have kept these worries on the boil: In December the Czech ambassador to Nato in Brussels, Karel Kovanda, said "Mečiar would be a stop sign for Slovakia. Full stop."

Only without Mečiar, Mesežnikov said, could Slovakia offer a guarantee that positive economic and foreign policy trends would continue.

And with right wing parties running in the polls at just over 35 per cent support, compared to Mečiar's steady 30 per cent, Mesežnikov said, they stood a realistic chance of forming an acceptable alternative to Mečiar for voters.

However, the political analyst argued that a new alliance might not wield the moral clout with voters than the Slovak Democratic Coalition had enjoyed, and that it still contained some unpredictable elements.

"Although this bloc would be an improvement on the Slovak Democratic Coalition in 1998, in that it would all be more or less right wing parties, in some ways it would be weaker," he said.

"The Christian Democrats are much more fundamentalist than they were then, and have less than half the support they had in 1998; the Democratic Party has split into two even smaller elements; the SDKÚ doesn't have a clear ideology, and Ano has a brief history and an unclear agenda," he said.

"Still, it would offer voters a better choice than they face right now.