Despite recent massive police operations against skinhead groups, not enough is being done at government or police level to combat a growing tide of neo-Nazi organisations, human rights activists say.
Just weeks before the Interior Ministry plans to release a report on the state of racially motivated crime and neo-Nazism in the country, human rights group People Against Racism (LPO) has said there are as many as 5,000 active neo-Nazis in Slovakia and that the number will grow.
"This is a big and growing problem and police must devote more resources to dealing with this. Not enough is being done. 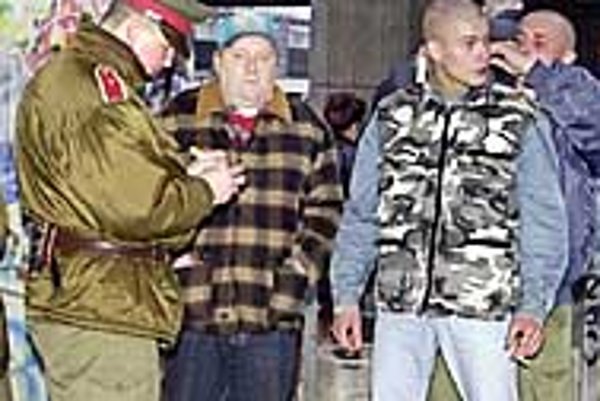 Despite recent massive police operations against skinhead groups, not enough is being done at government or police level to combat a growing tide of neo-Nazi organisations, human rights activists say.

Just weeks before the Interior Ministry plans to release a report on the state of racially motivated crime and neo-Nazism in the country, human rights group People Against Racism (LPO) has said there are as many as 5,000 active neo-Nazis in Slovakia and that the number will grow.

"This is a big and growing problem and police must devote more resources to dealing with this. Not enough is being done.

"Recent raids on skinhead meeting places were a step in the right direction, but the work has to be constant, not just an action here and there," said Ladislav Ďurkovič, coordinator of the LPO.

"The government has to speak out more about the issue," he added.

On January 12 police carried out a countrywide operation, raiding a number of suspected skinhead meeting places.

This followed a late-September raid on a rock concert in the north Slovak town of Papradno which had drawn a number of neo-Nazi gangs from across Europe.

Police have been banned from releasing figures or discussing the most recent operation, but Alex Kliment of the Police Presidium, a senior police body, said the raid had served its purpose.

"The operation was not meaningless. We are analysing the results and gathering evidence to allow us to lay charges against specific people," he said.

However, the LPO has attacked both raids as a disappointment.

"On the last search the police didn't even have home search warrants," said Ďurkovič. "The real result of the raid was that the police caught a few skinheads dealing drugs. They didn't get any of the movement's leaders," he claimed.

Despite arresting more than 89 people in Papradno, among them 18 Czechs, two Hungarians, two Germans and one Polish person, Kliment has admitted that it is unlikely more than one person will be charged as a result of the operation.

Police admitted after the Papradno raid that bungled security had let many skinhead leaders wanted across Europe escape in the operation.

But some experts on minority issues said the police action, although possibly not producing many convictions, is a step forward in fighting neo-fascism in Slovakia.

"The Interior Ministry has started to listen, and the operation in Papradno was a very positive thing, the first of its kind in Slovakia," said Michal Vašečka of the Institute for Public Affairs (IVO).

"At a time when the Czechs were starting to monitor the extremist scene, in general in the early to mid 90s the Slovak authorities were doing nothing. In fact, in the Vladimír Mečiar government [1994 to 1998] you had the Slovak secret service, who were supposed to be monitoring these groups, actually involved in them.

"Therefore we saw monitoring start only in 1998. It would be wrong to say this government has failed on this issue because it has done something when the previous government did nothing," he added.

Since the fall of communism in late 1989 former communist states have seen an explosion in neo-Nazi and fascist movements. Estimates by the LPO put as many as 12,000 people involved in skinhead and neo-Nazi gangs in countries like Hungary and the Czech Republic.

That support continues today and a network of extremist right wing gangs stretching across central and eastern Europe is beginning to consolidate, including groups in Slovakia, said Vašečka.

"Czech extremists are a big influence on Slovak groups, being more sophisticated and providing them with help and information. There are also proven connections between neo-Nazi groups across central Europe. They have been given help and funding from groups primarily from Sweden and Germany," he explained.

Last year the Slovak neo-Nazi website, WhiteFront, was banned after a complaint from LPO. But on January 8 this year it reemerged under a new domain name with a foreign server, but carrying the same content.

The website until recently carried a picture of Ďurkovič under the banner "Wanted Dead or Alive".

"Unfortunately the internet is such a medium that we can do little to fight against this sort of thing," said Kliment.

But People Against Racism have also complained that woefully inadequate resources have been devoted to bringing neo-Nazis to justice.

Only 10 officers are assigned to monitoring extremist groups. The figure in the neighbouring Czech Republic is 160.

"We need more men on the ground, officers who can get close to the extremists," admitted Kliment.

"The social situation is such that we have to count on the fact that the numbers of these groups will only grow, and we have to prepare measures ahead so we can prevent this," he added.

Slovakia has a national unemployment rate of just under 20 per cent, with joblessness in some areas reaching 36 per cent.

But inaction at government level is also a problem, claimed Ďurkovič. He said that ministers have done little to stamp out racist ideology at all levels of society, and have not spoken out vociferously on racially motivated killings.

"Ministers need to make more statements against racism and take more action on racial crime. The issue needs to be made more public. The government needs to analyse this problem and look at its roots. There needs to be education on this in schools," says Ďurkovič.

He added that a notorious August 2000 racially motivated murder of a Roma woman, Anastázia Balážová, was largely ignored by ministers.

"None of them really said anything. They should have said a lot more," said Ďurkovič.

There have been six racially motivated murders in Slovakia since the state became an independent republic in 1993.

However, legislation has been passed recently in direct response to fears of neo-Nazi groups spreading holocaust denial information.

On November 8 last year an amendment to the Penal Code made it a criminal offence for a person to make any denial or excuse of Nazi crimes, punishable by up to three years in prison.

Under Slovak law anyone who promotes fascist movements through media or the press can be sentenced to eight years in prison.

But despite such legislation, Vašečka, like the police and the LPO, warned that neo-Nazi groups were becoming a much larger problem, especially for the country's estimated 500,000 Roma.

"In general in society skinheads are not liked. Recent polls say that about 70 per cent of the population doesn't like skinheads. But once you start looking at the Roma, then attitudes start to shift.

"The Roma are not liked and the danger is that these groups will start focusing just on the Roma. In fact, they already show signs of doing just that. They are becoming more sophisticated."