Schuster and Mečiar head to round 2

Finishing about as well as he expected, Mayor of Košice Rudolf Schuster came close to earning 50% of the votes cast in the first round of Slovakia's first direct presidential election May 15, soundly drubbing all independent candidates and placing strongly above his primary rival, former prime minister Vladimír Mečiar.
The SOP chairman and former communist leader will now face Mečiar in a second round battle May 29 which is shaping up to be a near-mirror image of the factious parliament, with government coalition ministers and reform-minded voters supporting Schuster and the HZDS and SNS nationalist opposition squarely behind Mečiar's camp. 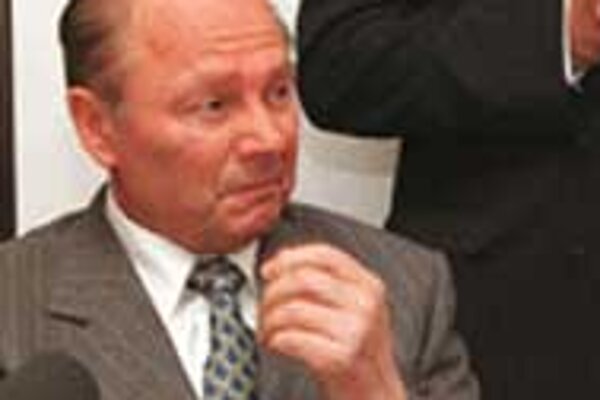 Font size:A-|A+  Comments disabled
Finishing about as well as he expected, Mayor of Košice Rudolf Schuster came close to earning 50% of the votes cast in the first round of Slovakia's first direct presidential election May 15, soundly drubbing all independent candidates and placing strongly above his primary rival, former prime minister Vladimír Mečiar.

The SOP chairman and former communist leader will now face Mečiar in a second round battle May 29 which is shaping up to be a near-mirror image of the factious parliament, with government coalition ministers and reform-minded voters supporting Schuster and the HZDS and SNS nationalist opposition squarely behind Mečiar's camp.

While each candidate will have an additional 4 million crowns ($93,000) to spend on the campaign and an hour of free television time, the two have kept relatively quiet about their campaign strategy over the coming weeks. Schuster told The Slovak Spectator only that he planned to concentrate his time on those Slovak regions such as Trenčín, Žilina, and Prešov, where Mečiar's support was strongest.

"We would like to go to the districts where we are having a little trouble," he said.

Mečiar, for his part, said he was rather pleased with the outcome of the first round in which he earned 37.23% of votes compared to Schuster's 47.37%. "I don't consider the 300,000 votes [between Schuster and himself] a significant difference," he said at a May 17 press conference in Bratislava.

"Mr. Schuster and I are different. We have different work, lives and programmes. So people will have a chance to choose, as the differences between the two of us are clear and so the results of the election will also be clear," Mečiar said.

In Bratislava, the Slovak public appears to be reacting with standard aplomb to the election results, many seeing the coming election as necessary to avoid a backward slide but not particularly as a move towards a brighter future. Some said their vote for Schuster was already more for practical reasons than a sign of true support, as he has the ability to beat Mečiar. "We had to chose our battles," one voter told The Spectator. Mečiar supporters also appeared to be keeping a low profile over the week, with no evident spontaneous public demonstrations to drum up support to bring the nation's most influential leader back.

"I believe people will want to go vote because the majority of them still hope for a better future," said reluctant Schuster supporter and Bratislava student Peter Goga, 21.

Official election results released by the Central Election Committee revealed that voter turnout was high, with almost 74% of all 4,038,899 eligible voters participating in the first round, according to the Slovak Statistics Office. The elections were deemed fair by international observers, with only 22 of 2,948,408 ballots cast in 2,918 Slovak towns and villages found unacceptable for the final count.

The third place candidate, former diplomat and actress Magda Vášáryová, finished well below expectations with a mere 6.6% of support.

Both politicians and analysts say that the second round will serve as a referendum on the path of reforms the country has taken since the September national elections, when Mečiar's HZDS party was voted out from government majority and Mečiar left the Prime Minister's chair.

In his campaign speeches, Mečiar is focusing on the weak spots of the current leadership as judged by domestic and international observers: the collapsing economic situation and plummeting currency, and the substantial public opposition to the NATO strikes.

At the May 17 press conference, for example, he berated the current government for doing too little to prevent the country from economic recession and for actively participating in the Yugoslavia war conflict by supporting NATO. He stressed that his goal would be to persuade voters as to the incompetence of the government and show how Schuster will just bring more of the same troubles.

"How will life in Slovakia go on, how will the democracy in this country develop - this is what my campaign will be about," Mečiar said. "I suppose that further developement will continue to work in my favor," he added.

Mečiar said that he did not plan to leave politics or the head of the HZDS leadership if defeated May 29. But if the Slovak people vote him down in the first direct election in which he is involved, the political ramifications will be significant, analysts said.

Schuster, when interviewed by The Slovak Spectator by phone on May 16, on said that he "wasn't surprised with the results of the first round." He added that he didn't expect himself to be elected president in the first round, as to do so requires 50% of the total electorate- not just of those who vote. "It would require significantly higher participation of voters," he said, "and it was also impossible due to too many candidates that were running for the presidential post."

Though she was the leading independent candidate, it was with a barely concealed air of resignation that Madga Vášáryova cast her ballot with her husband and daughter at a high school on Grosslingnová Street in Bratislava on election day.

Explaining her weak showing she said: "It was something completely new, a new fashion, a new lady, someone out of the political sphere. There were so many challenges to overcome."

Pre-election polls had placed Vášáryová's support at closer to 18%, but at the last moment many of her voters apparently had decided give their vote to Schuster, a fact that was seen as a sign of political maturity by Schuster supporter and SDK member, Ivan Šimko.

"The citizens voted in accordance with their political conscience and not with their personal preferences, so that their votes would have a decisive importance and wouldn't be thrown away [on candidates that had no chance to be elected]," the deputy for the ruling coalition said. "Such maturity of Slovak voters is a positive aspect and many [Slovak] politicians could take that as a good example," Šimko said.

While by Western standards political participation was high, various voices said that they expected an even larger turnout for the second round.

According to Michal Ivantyšyn, political analyst with the Institute for Public Affairs, an independent Bratisalva-based think tank, people will show up to vote because Mečiar is a candidate for the five-year term.

"In a normal situation where there were two relatively similar candidates, regarding their past activities and programmes, less people would vote in the second round," he said. "But this is not a normal situation."

"A majority of Slovaks don't want Mečiar to become a president and I think that they will indicate that," he said.