A cordial one-on-one meeting between Slovak Prime Minister Mikuláš Dzurinda and Czech Prime Minister Miloš Zeman on May 15 produced only limited progress on the thorny issue of how to divide jointly-owned property and debts left over from the former Czechoslovak federal republic.
"We have spoken concretely about the situations in our national banks, we spoke about [soon-to-be privatised] Československá Obchodní Banka [ČSOB], about a mutual exchange of shares in [Slovak] Všeobecná Úverová Banka [VÚB] and [Czech] Komerčni Banka [KB] and other problematic areas," said Dzurinda at a press conference following the two-hour summit in Starý Smokovec, a mountain resort in northern Slovakia. 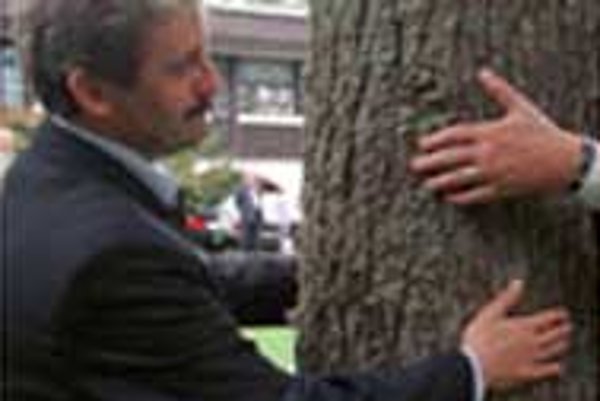 Font size:A-|A+  Comments disabled
A cordial one-on-one meeting between Slovak Prime Minister Mikuláš Dzurinda and Czech Prime Minister Miloš Zeman on May 15 produced only limited progress on the thorny issue of how to divide jointly-owned property and debts left over from the former Czechoslovak federal republic.

"We have spoken concretely about the situations in our national banks, we spoke about [soon-to-be privatised] Československá Obchodní Banka [ČSOB], about a mutual exchange of shares in [Slovak] Všeobecná Úverová Banka [VÚB] and [Czech] Komerčni Banka [KB] and other problematic areas," said Dzurinda at a press conference following the two-hour summit in Starý Smokovec, a mountain resort in northern Slovakia.

The only concrete deal to come out of the summit was an agreement to exchange shares in the VÚB and KB banks. Dzurinda reported that he had agreed with Zeman "to recommend that the Czech and Slovak National Property Funds [privatisation agencies] prepare an exchange of stock at a one-to-one ratio."

Martin Barto, chief strategist at Slovakia's largest bank, Slovenská Sporiteľňa (SLSP), explained that following the first wave of privatisation in 1991 in former Czechoslovakia, the Slovak FNM privatisation agency had wound up owning a stake in the Czech KB bank, while the Czech FNM had found itself with shares in the Slovak VÚB. "It was basically a cross-ownership issue, and it wasn't a difficult problem to solve [at the summit]," said Barto.

Indeed, the more difficult problems - selling the ČSOB Czech state bank and settling the outstanding debt from the split-up of Czechoslovakia in 1993 - received little more than lip service in the High Tatras.

Zeman told reporters the harmonious relations that had existed between the Czech and Slovak Republics since the election of a new Slovak government last September had given new impetus to discussions on former federal property. "This problem, which was neglected for six years [after the 1993 break-up of Czechoslovakia], is now being solved in a very friendly atmosphere," said the Czech Prime Minister. "I really appreciate that, because even in the best families, if money is involved in a deal, relations usually get worse. But during my discussion with Mr. Dzurinda, nothing like that happened."

Despite the friendly atmosphere and the added impetus, however, neither Prime Minister wanted to say anything about the 29 billion Slovak crowns the National Bank of Slovakia owes to the Czech Republic stemming from Forex loans held by the former Czechoslovak state bank.

The Czech Republic, for its part, is refusing to hand over gold reserves that belong to Slovakia as long as Slovakia refuses to cough up its share of the former federal debt, which includes 15.5 billion crowns owed by Slovak state firm Slovenská Inkasna to ČSOB. Inkasna was formed by the Slovak Finance Ministry in 1993 to administer the Slovak share of the former federal debt, but stopped paying installments to ČSOB in May 1995.

The Inkasna case is now before the Washington-based International Centre for the Settlement of Investors' Disputes, a World Bank affiliate. The Centre is expected to decide before the end of May whether the dispute lies within its jurisdiction.

Despite the lack of concrete progress on the debt issue, Zeman promised that a deal would not be long in coming. "Czech and Slovak officials still remember the promise they gave in the autumn last year, that the property division issue would be closed in a year and a day. This autumn we'll start preparing a comprehensive agreement between the Czech Republic and Slovakia which will bring closure to this problem," said Zeman.

Barto, for his part, could not say if the Inkasna question was likely to be cleared up as quickly as Zeman had promised. "They might try to settle out of court, but I wouldn't like to guess if they will make the autumn deadline," he said.

Nor did either Prime Minister want to comment on the impending sale of ČSOB, which has seriously strained relations between the Czech government and the Slovak central bank recently.

ČSOB, which is 24.13% owned by the NBS and 66% by the Czech FNM, the Finance Ministry and the central bank, is in the last stages of privatisation. The Slovak NBS recently accused the Czech side of trying to sell its stake in ČSOB independently of the Slovak side, and vowed to take the case to court.

In turn, senior management figures at ČSOB have been reported in some media as saying that Slovakia may default on its foreign debt - an allegation that the Slovak Finance Ministry calls unfair, untrue and damaging to the interests of the Slovak Republic.

The default allegations were published in the May 10-16 issue of the Prague Business Journal. An unnamed "ČSOB board member" is quoted by the weekly Journal as saying "There is barely any hope for them [the Slovaks], we are already dealing with what we are going to do... if they default."

According to the Slovak Finance Ministry, the pending sale of ČSOB, and the related dispute over how finally to settle debt issues left over from the former Czechoslovak federal state, have led the Czech side to publish untruths which aim to undermine the position of the Slovak side in the ČSOB privatization.

Finance Ministry spokesman Peter Švec reported that the Slovak central bank's debt equals 24.8% of GDP, one of the lowest figures among transforming countries. The 1999 state budget projects a deficit of 15 billion crowns, while the economy itself is far from the risky situation suggested by ČSOB management, stated Švec.

Barto also said he disagreed with the ČSOB allegations. "There is always the threat of default, but I really doubt it will happen," he said. If the ČSOB statement were true, the situation would also be known by ratings agencies which deal with these things. I don't think the ČSOB has better figures than everyone else."

Barto said he thought the likely source of the conflict over ČSOB was that the Czech side was afraid the price they would get for their stake would be watered down if the Slovak stake was sold to the same investor at the same time.

"The Slovak side is trying to push through the sale under the same conditions as the Czechs," he said. "But if this happens, the two sides [Czech and Slovak] might have to split whatever money the investor is willing to pay."

Dzurinda said that despite the many problems that still surround the division of federal property, he was confident a deal would be hammered out by this fall. "We Prime Ministers are not hiding from this problem - we are trying to improve the excellent relationship between Slovakia and the Czech Republic through good will and [respect for] the exact facts."

The Czech side has been demanding that the Slovak state assume responsibility for 15.5 billion Czech crowns in debt left over from the split of Czechoslovakia in 1993. Slovak Finance Minister Brigita Schmögnerová said recently that Slovakia would not repay the sum, at least until the ČSOB privatisation is complete.