HZDS on verge of radical reform

In its first big step towards regrouping after being voted out of government in last September's elections, Slovakia's largest political entity - the Movement for a Democratic Slovakia - has elected a new leadership and has begun to redefine its role on the Slovak political scene.
But the Movement, known in Slovakia for years simply as "the HZDS," is ringed around with doubters, political observers who argue that the HZDS is too divided and still too burdened with notorious personalities to be capable of functioning as a standard political party.
At a weekend conference on April 17 and 18, the HZDS confirmed its chairman, former Prime Minister Vladimír Mečiar, as leader of the movement. 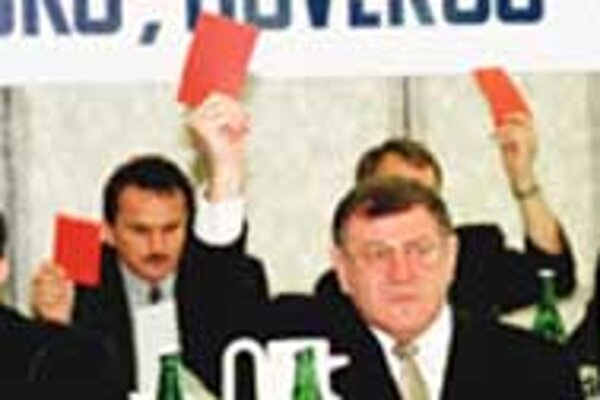 Font size:A-|A+0
In its first big step towards regrouping after being voted out of government in last September's elections, Slovakia's largest political entity - the Movement for a Democratic Slovakia - has elected a new leadership and has begun to redefine its role on the Slovak political scene.

But the Movement, known in Slovakia for years simply as "the HZDS," is ringed around with doubters, political observers who argue that the HZDS is too divided and still too burdened with notorious personalities to be capable of functioning as a standard political party.

At a weekend conference on April 17 and 18, the HZDS confirmed its chairman, former Prime Minister Vladimír Mečiar, as leader of the movement.

Mečiar resigned his seat in parliament last October in favour of Ivan Lexa, the former boss of the secret police - the Slovak Intelligence Service (SIS). But when Lexa was arraigned in custody on April 15 to await trial on charges of corruption, Mečiar decided to return to high-level politics.

Several names among the new HZDS vice-chairmen drew scorn from critics of the movement. Gustáv Krajči, for instance, is under investigation for allegedly marring a 1997 national referendum on NATO membership, while Žiak, as a former SIS member, has been tarred with the same brush as incarcerated spy boss Lexa.

According to Ľuboš Kubín, a political scientist from the Slovak Academy of Sciences, "electing people like Krajči and Žiak was just proof of how much dirt there is in this party. They tried to wash away the past, but even more dirt was stirred up."

But Oľga Keltošová, a HZDS deputy and former vice-chairwoman, told The Slovak Spectator on April 22 that each of the four new vice-chairmen had been selected for their experience and political skills. "Each of these men has worked hard in the movement for a long time, and has proven his worth" she said. "It seems funny to me that Mr. Žiak should be criticised for his past activities when someone like Vladimír Palko [former chief of the Czechoslovak secret service] is vice-chairman of the Christian Democrats [a government party] and no one talks about him."

Of Krajči, Keltošová said that "he is innocent until proven guilty by a court, and I must say that concerning our members and supporters, we never consider them as black sheep, but rather as victims of political show trials by the government."

"We would rather focus on everyday economic problems that everyone has to deal with," she added.

The second major aim of the HZDS conference was tobegin the process of transforming the movement into a standard party. According to Ivo Samson, a research fellow at the Slovak Foreign Policy Institute, the basic difference between the two terms is that a movement is an ideologically amorphous body which tries to address the largest possible segment of the electorate, regardless of political philosophy, while a standard party "appeals to a much more defined group of voters through a unified political ideology."

Since its inception in 1991, explained Keltošová, the HZDS has functioned as a "wide spectrum civic movement that combined several different political philosophies under one roof."

However, since 1998 elections - which the HZDS won, but by a margin too small to allow them to form a government - the movement has been inching towards internal reform. Keltošová said that "70%" of HZDS members now favoured turning the movement into "an official people's party with ties to other such parties throughout Europe." She explained that 'people's parties' tended to appeal to poorer voters, and to practice a centre-right brand of politics.

The HZDS, Keltošová added, wanted to build its 'people' politics on three pillars - Christian ethics, national pride and social equality. HZDS members would be asked in September to vote on changes to the movement's statutes as well as to its avowed philospohy, Keltošová said, to complete the process of transformation.

But Grigorij Mesežnikov, president of the Institute for Public Affairs, an independent Bratislava think tank, said that the movement washamstrung by its distorted internal structure.

With Mečiar as leader, Mesežnikov said, the HZDS would not be able to transform into a standard political party because its decision-making and leadership structures were based on a cult of personality - that of the charismatic Mečiar. Without Mečiar, he continued, the movement would find it hard to transform into a party. "They don't know what a party should look like and which political path it should take," he added.

Samson agreed, saying that if Mečiar stayed on as leader and dominant figure, "he would attempt to block the HZDS's transformation into a party with strict internal rules, because he would fear losing control."

Since Mečiar's April 9 decision to run for president, however, some political commentators have suggested that his potential defeat in May presidential elections might lead to his leaving politics altogether.

Samson said that without Mečiar, the HZDS was more likely to make a successful transformation to a party, but on the other hand stood to lose a large part of its electoral support.

Mečiar himself said at the April 17 conference that he had intended to retire from politics on that very day, but that Ivan Lexa's incarceration had convinced him to stay on, and indeed to run for president.

"I thought that today would make a nice conclusion to my career," said Mečiar. "But if they [the government] are going to kill us, arrest us, if they're going to attack us, no way!" he shouted, referring to the Lexa case and the January assassination of Ján Ducký, former Economy Minister in the last Mečiar cabinet.

According to Mesežnikov, Mečiar's candidacy was an attempt to unite the political factions within the HZDS against the ruling coalition. The presidential elections would be Mečiar's last political act, said Mesežnikov, because he has no chance to win.