Moving the Slovak government up to speed in computerisation is the job of Martin Sepp, the head of the Department of "Informatisation and Rationalisation" for the state goverment. According to Sepp, there has been an increase in the amount of information and services available via the Internet to Slovak citizens since the beginning of 1999, and also improvements in the network the government uses to communicate internally.
Sepp said he would like to see changes in the sector proceed faster, but added that financing is a problem, especially now that much of the money earmarked for computer networks must be used for the state's Millennium Bug preparations. 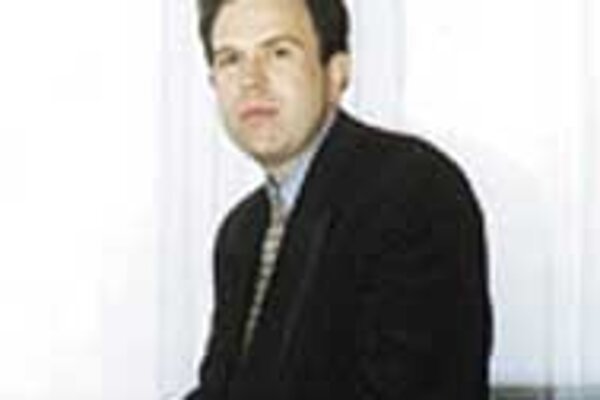 Font size:A-|A+0
Moving the Slovak government up to speed in computerisation is the job of Martin Sepp, the head of the Department of "Informatisation and Rationalisation" for the state goverment. According to Sepp, there has been an increase in the amount of information and services available via the Internet to Slovak citizens since the beginning of 1999, and also improvements in the network the government uses to communicate internally.

Sepp said he would like to see changes in the sector proceed faster, but added that financing is a problem, especially now that much of the money earmarked for computer networks must be used for the state's Millennium Bug preparations.

The Slovak Spectator (TSS): The Government has created Internet web sites for each of its ministries. Why did you decide to create the sites?

Another thing, for example, is the IRC, (Internet Related Chat), which is an on-line discussion with government representatives. Already we've had Prime Minister Dzurinda and just recently we had [the Minister of Transport, Post and Telecommunications] Gabriel Palacka.

TSS: What has been the reaction to the sites and to the IRC? Does it seem popular among the public?

MS: It is very popular indeed, the feedback has been great and I think that other institutions could learn from this. The government office will most definitely try to have all the Ministers available at one point or another on the IRC.

Before this, there had not been any real public information in this respect. From what I could tell as a citizen of this country, access to information that could actually help people did not even exist.

TSS: In terms of your computer networking, do you follow a particular model to learn how to effectively communicate effectively? Do you follow the lead of western European countries?

MS: No, as far as I know no such model exists.

My position, as the department name states, involves the computerizing and rationalizating the information passing through the state. My task is then divided into two parts.

Let me explain what I mean. Usually it happens that all departments sort out information concerning their particular fields. Then it is extremely difficult to get this information from them in a suitable manner. Sure, there are such institutions like the statistics office which have solid mechanisms to gather information for other departments or even for the department itself.But my task is to then create an integrated information base which would be accessible when needed for the citizens and institutions, to enable them to find the information they ask for.

When you look at today's situation, for example, there is a lack of an 'entrance portal' by which one could begin to search for information. The ministries do not have any available access to information from other ministries, really. Except for a few exceptions, there is usually only general information about the particular ministry on-line, some general descriptions about the function of the ministry... and that's it. This is bad.

This goes back to the point about information systems I made earlier. The goal is to build a full-fledged information centre for parliament and the state administration where all information will be available at one place for all the different branches of the state administration and for all things functioning all over the world. In the USA, they have this type of system and it is worked out well, as it is in European countries like Norway and Denmark.

In Slovakia, the problem is not with the information infra-structure. We have enough information systems here but, in my opinion, we tend to neglect their content. So, to sum up- we have to prepare the inter-governmental communication systems and to spread this system to the local and regional spheres as well, thus creating a fully integrated information environment in Slovakia.

TSS: When will the systems begin operating in the ways you've just explained? How long do you suppose information integration will take for the Slovak government?

MS: We have already adopted the computerised administration of written and numeric records. To further answer your question, I must discuss the money problem. I do not want to blame everything on the lack of finances, but I feel that [due to the money situation] it will take at least two years before we will be able to see some palpable change. Of course we have already seen results this year, but the complex information 'portal system' that we are aiming at is time-consuming and we must prepare it and get it running gradually. I would say that by the year 2000, we will know more.

TSS: How often do government officials actually use the system?

MS: Of course there are statistics about the frequency of use of these systems by individual government departments. Some of them very rarely enter the sites, which is quite sad. But some of them often use it. The most active ministries are the Ministry of Transport, Post and Telecommunications, and the Ministry of Economy.

The problem is that such concept never existed before. Everyone's information had been in the competence of each department or each sector, individually. The goal is to have some sort of an organized way of working with the information. Today, a new government council for information services is being constituted. My personal idea about this council is that it should be responsible for the full 'informatisation' for all spheres of public life, including sports, health, and education.

Also, it is important to note that the 'informatics' have so far been in the competence of the statistics office of the Slovak Republic. The government has just decided to transfer the task to the Transport Ministry. The chair of the government council for 'informatics' is now Minister Palacka.

TSS: Compaq has stated that the government sector is one of their largest sources of revenue. How much have you cooperated with Compaq?

MS: It is true that Compaq has supplied the government with hardware, but there is no special software equipment there. I can only say that Compaq is just one of the suppliers, but there are many of them. One of our roles is to allow all appropriate suppliers in this sphere supply us with technology, so we try to enable all solid firms to contend for our orders. The competition is free, we do not favour anyone.

TSS: What portion of the government budget has been assigned to the development of information services?

MS: What we are talking about is not a single specific project, so it is impossible to give an exact figure. The government did not assign a specific sum. So today we are trying hard to acquire financial support from the European Union, PHARE, and from our own reserves. But, unfortunately these funds will now have to be spent on Millennium Bug preparations and other problems that need to be solved immediately.

Our approach is to address small, partial areas rather than one mega-project. As we know from the past, that strategy never ends up working well, like the project of registration of inhabitants and many others which, due to the lack of coordination, progressed very slowly. One problem is the law on state information systems from 1995 or 1996 which, in fact, is suited to organise and support exactly these ineffective mega-project systems.

I think this should be changed. I believe that the whole information political strategy should address the citizen directly and primarily because [the citizen] needs the state to help him prepare personal documents, identification cards, certificates, health, and social services which can be made more effective with the use of computer systems. I think this is especially important and influences all other spheres. The registration project of citizens, for example, has not been completed yet due to the lack of a more dynamic dialogue among the public administration sector and the other sectors of the state administration. The current minister, Palacka, is a person who knows quite a bit about information science and therefore I believe things are more likely to change than they were in the past years.

TSS: Is there any kind of pressure from the EU that could be seen as the driving force behind the Slovak decision to introduce more developed information systems to the country, or is it simply a matter of achieving better communication within the country?

MS: Lowering the running costs of state administration is our number one priority. The other goal is the building of an information system around the citizen himself, which does correspond with EU principles.

TSS: How long do you think it will take for the new communication technology to be fully accepted and actually used by the state as well as by the citizens?

MS: I believe that computer literacy [in Slovakia] will increase quite rapidly, copying modern trends. Despite many efforts of the state administration in the past, we have only recently managed to get a government resolution on this matter in the beginning of March 1999. This resolution concerned the complicated problem of millennium bug preparations- a problem that cannot be underestimated. The problem, as a whole, cannot be solved now- it is too late. But many areas can still be addressed. Unfortunately, Mr. Condík, the former head of the statistics office, which was then responsible for the info systems, said in 1997 that the problem didn't require urgency. He said there would be plenty of time. But there wasn't, even with the three years to think of a strategy to overcome the millennium problem.

I call this the 'informatisation' of society, a new dimension which has not been talked about until recently. It is a matter of the way people think, how people look for new job opportunities. I think it is important to prepare prospects for the future employment of, say, people who work for a heavy machinery factory somewhere in central Slovakia, with the task of maintaining employment because we know the steel industries are in crisis, many of them are closing down. We want to give the people a chance to work, setting new technology components together in order to employ in a sphere with better prospects for the long term.