Q: What is your opinion on the resignation of the Commission and the allegations of fraud against several commissioners? Will the change prolong the pre-accession procedures for candidate countries, including Slovakia?
Herbert Boesch (HB): My impression from discussions with friends is that it is Slovakia's goal to join a strong union and I think we are now on the way to becoming a really strong union indeed.
The basic problem still is that we have an administration which is more of an administration of the sixties, not of the late nineties. So this crisis had to come. The way that the commission played with information, for instance, in communication with the European Parliament, was totally unacceptable. 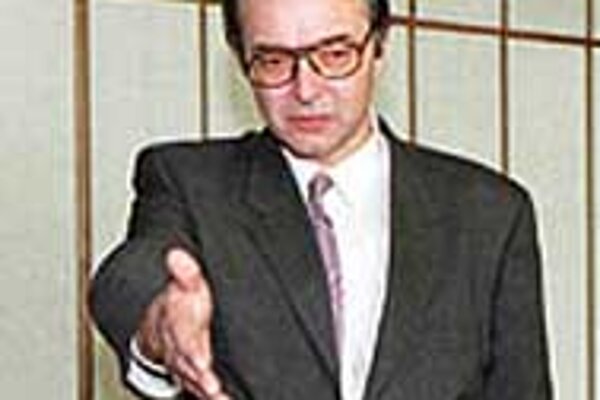 Font size:A-|A+0
Q: What is your opinion on the resignation of the Commission and the allegations of fraud against several commissioners? Will the change prolong the pre-accession procedures for candidate countries, including Slovakia?

Herbert Boesch (HB): My impression from discussions with friends is that it is Slovakia's goal to join a strong union and I think we are now on the way to becoming a really strong union indeed.

The basic problem still is that we have an administration which is more of an administration of the sixties, not of the late nineties. So this crisis had to come. The way that the commission played with information, for instance, in communication with the European Parliament, was totally unacceptable. But you have to see that there are different schools of thought concerning European institutions and their affairs. The older ones do not talk much about the negative sides of European integration. Then there is the younger generation, which says that we have to make the parliament as transparent as it can be.

European officials are not more fraudulent than anyone else, but...the temptation is bigger than with national budgets. The real fraud in Brussels is much less than many anti-European groups say. It is about 25 to 30 million Euro. That is high, but this is not the problem. The real problem is the lack of administrative control which existed until recently. More administrative control is a very important part of properly preparing for enlargement, for the number of seats and the creation of specific committees. These are problems that nobody talked about, but we have now started to talk about.

TSS: Do you think that Slovakia could be transferred to the first group of countries applying for accession at the 1999 Helsinki summit?

HB: I supported Slovakia becoming a member of this first round even earlier. The European Parliament made a very clear statement about recent political developments in Slovakia, and as strongly as we criticised the situation before, we support it now. I think there are very clear signs of positive changes. Slovakia also has to understand that admission is not the only thing that [the EU] has to deal with. In the first place there is Agenda 2000 [a document which outlines a new system of financing for the European Union]. If this problem will be solved under the German presidency, then I am convinced that Slovakia will be invited to Helsinki for the first round of negotiations.

TSS: Would the process of restructuring the administration model postpone the accession period for candidate countries?

HB: In all debates that we now have about financing according to Agenda 2000, I, as a member of the EP's budget committee, do not see any problems concerning real enlargement. What we will do is to bring Slovakia into the area where it belongs, because an artificial division from other candidate countries was created by not placing it along with its neighbours. I hope this [shift of Slovakia to the first group] will be successful but I do not think that the administration problem has any influence on this.

The other way around: you could say that the whole procedure could make the process of enlargement more dynamic and faster. I know that you have programmes such as Phare which are not implemented the way they should be, and if we can improve their efficiency, the whole process can become quicker.

TSS: Do you believe that the new Slovak coalition will be able to stay in power for the entire four-year term in office?

HB: Yes, I do. I think you are much too influenced by rumours that surround the parties. I believe that the coalition has a very strong will to lead Slovakia, and to lead it successfully also into European structures.

TSS: Do you think problems still remain in negotiating with the Slovak side, as there were with the government of former Prime Minister Vladimír Mečiar?

HB: I think (before) the biggest problem was misunderstanding. For example, when we talked about supervisory boards in specific areas like the secret service or the privatisation fund, we were always met with arguments which cited current law in Sweden, or the [non-existence of] a minority law in some [EU] countries. So I always felt like we did not understand each other in the substance of what was being aimed at.

We also want to give the new government [of Prime Minister Mikuláš Dzurinda] a signal that we are watching the situation in Slovakia very closely and it is something that we are happy about. Slovakia belongs again among the small but important countries in the centre of Europe.

The EU is still a voluntary organisation, no one has to join the club. So our approach is the same [as it was with Mečiar], but after meetings with Mr. Dzurinda and his people, we understood and recognised that some change has taken place in Slovakia.

You always have to understand that we are all part of a bigger world, and the September elections were a great signal for me. More than 80% [voter participation], it's great - and the clear victory by the former opposition showed that you want to come out from isolation.

TSS: How could areas such as the nuclear power plant in Jaslovské Bohunice and the problem with ethnic minorities in Slovakia affect the country's accession efforts?

HB: To be honest, I do not see any major problems for Slovakia. From what I see in the Slovak government, I understand that they are not just waiting for an invitation, but they are trying to solve existing problems. That is the right attitude. The accession process is something which we have to work on day by day. In the case of Slovakia, we have just started, but the positive thing is that there is good will on both sides. My advice is that, in order to overcome the differences that exist between Slovakia and the EU, we should maintain close co-operation to make the differences smaller from day to day. I also see more possibilities and more room for the accession process tied with the approval of Agenda 2000.

The minority problem is not as big as it is made out to be. We see that you have people who represent minorities as members of the highest offices in your country. I am convinced that if all important layers recognised the importance of this kind of proportional representation, you have improved a lot from the September elections.

TSS: How would you assess the economic reforms taken by the Dzurinda cabinet? Would you have further suggestions of how to improve the economic situation in the country?

HB: Your government's economic plans seem enormous. They are engaging plans, and we can only encourage the government to endure for the whole term so that they will be able to carry out the plans successfully. In meeting the criteria of the Maastricht treaty and the [common EU currency] Euro criteria, many EU countries such as Austria had to adopt cost-saving budgets, so you are not alone in this respect. I can just encourage this government to go on in this way. It is not a popular way, I assume, but as far as I understand, the reaction of the Slovak people has not been so bad. As long as you can describe and explain to the people what is happening, the government will be in a very strong position.