When the citizens of the small town of Nováky in central Slovakia have questions about local government, they can call in to a bi-weekly question and answer show which runs on what was once Slovakia's only municipally-owned television station. The town's mayor, Dušan Šimka, appears on the show a few times a year.
When the local elementary schools need money, Šimka's government appeals to the owners of local factories to donate funds. To aid the struggling district hospital, Šimka helped enroll the town's school children in an international program which raises money by selling their artwork in Norway. 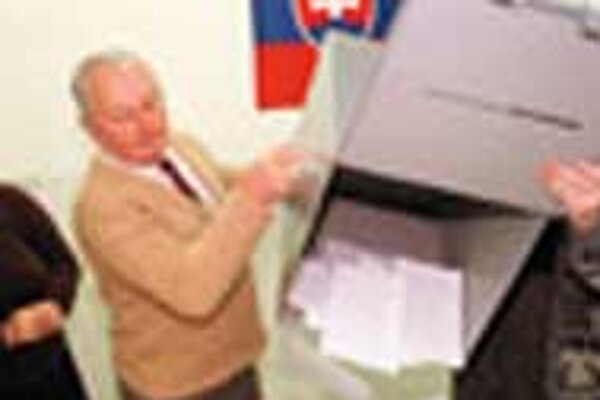 Font size:A-|A+  Comments disabled
When the citizens of the small town of Nováky in central Slovakia have questions about local government, they can call in to a bi-weekly question and answer show which runs on what was once Slovakia's only municipally-owned television station. The town's mayor, Dušan Šimka, appears on the show a few times a year.

When the local elementary schools need money, Šimka's government appeals to the owners of local factories to donate funds. To aid the struggling district hospital, Šimka helped enroll the town's school children in an international program which raises money by selling their artwork in Norway.

Šimka says he is trying to be the opposite of the faceless, nameless bureaucrat with which the public in Slovakia is used to dealing and who has given state administration a bad name. His hands-on ideas have caught the attention of international non-governmental organizations in Slovakia pushing for similar activities in other towns on the eve of a major initiative to increase power to local governments in Slovakia.

"I talk about the kind of problems people would like to listen to. I am not anonymous," Šimka said.

After years of stagnation and setbacks in the process of decentralisation, the Slovak central government is now working on a plan which will give more power and funding to its 2,867 local village, town and city governments. Though the details of the plan, which is scheduled to be completed by May 31, have not yet been settled, the overall aim will be to increase funding to towns.

Viktor Nižňanský, who directs the economic think-tank Mesa 10 and is spearheading the government plan, says he hopes the initiative will also encourage local government officials to take responsibility for administering local schools, culture and other concerns currently managed by the state.

The main problem currently faced by local governments in Slovakia is not a lack of constitutionally-granted powers, but a shortage of money needed to wield the powers available to them, explained Kenneth Mahoney, a representative of the North Carolina-based Research Triangle Institute, which is funded by USAID to assist local government projects in Slovakia.

Under the 1994 to 1998 government of former Prime Minister Vladimír Mečiar, the share of the centrally collected taxes which went to local governments for their own use steadily decreased, according to a 1997 report written by Nižňanský for the Institute for Public Affairs. At the same time that funding was being cut, wrote Nižňanský, a redivision of Slovakia into eight state-administered districts in 1996 increased state bureaucracy at the local level and resulted in greater central government control over local government.

Mahoney said that additional problems are now caused by legislative confusion and the conflicting policies of state and local governments. For example, towns are expected to use their own resources to pay for the maintenance of school and hospital buildings. But the directors of the institutions and the policies followed by them are determined by the state.

The same is true, Mahoney continued, of the sewage systems, which must be maintained by municipal governments but are owned by the state.

Monica Marhevska, project manager of a USAID-funded local government education programme called, "Good Day, Local Government," explained that in general, the towns are not being given enough money - or the opportunity to earn enough money - to cover all of the tasks they are responsible for.

Local towns are able to raise funds though the sale of property and levying of property and a few other forms of taxes, Mahoney said. But property taxes at the local level, he explained, are not determined by the value of the property but are instead set by law at a very low rate.

What is being done

Before the September, 1998 state elections, the issue of local government reform was handled by the Interior Ministry. It has since been taken over by a newly-formed council called the Government Council for Civil Service. This council includes not only members of the Slovak government but also representatives of the national Association of Cities and Towns (ZMOS), the Union of Cities, academic administration bodies and the Economic University in Bratislava. At the head of this organisation is Nižňanský, who in the past has worked closely with Deputy Prime Minister Ivan Mikloš.

The goal of this group, Nižňanský said, is to come up with a Strategy for Regional Government, a 3-year plan which will outline changes in local government to take place by the end of the year 2001.

The project is being funded by PHARE, one of the grant programs of the European Commission intended as aid for economic restructuring. The EC has already invested 300,000 euros in the project, and between 1 and 2 million euros in additional funding will be granted after the draft report is completed in May, Nižňanský said.

The first reforms will change the system of financing for municipal government and will reform the tax code, Nižňanský explained. Vladimír Zlacký, an advisor to Mikloš, said that the changes envisioned could include increasing the power of local governments to levy taxes. Another option, he said, might be to improve the efficiency of tax collection by moving enforcement to the local level. Efforts would also be made to give local governments more control over the funds granted to them, Zlacký added.

Nižňanský said that the motive behind the tax reform was to find a way to decrease the reliance of towns on the state, which has its own fiscal problems.

"In future days, the situation will not be changed, as ... due to inflation... the villages and towns will get less money. It is impossible to give them more money from the state," he said.

The plan will also work on giving more power to small villages with less than 1,000 inhabitants, as they currently do not share the same powers as larger towns, Nižňanský said. It would also reduce the number of employees in state administration, as well as in regional self-government.

In the more distant future, reforms could include electing a "council of experts" on the local level. Ultimately, the plan might also lead to changes in the constitution, which would be required, for example, if the heads of district governments were to become elected and not state appointed positions.

While the state plan slowly takes shape, various non-governmental initiatives are underway in the towns and villages and on the national level.

Some, such as "Good Day, Local Government," are intended to increase education levels among current government officials and assess the situations in the towns and villages.

"We are still working on getting people to realize local government is their responsibility and that it is their right to take part. Sometimes people still think they are in communist times, when the government seemed to exist to give them problems," Marhevska said.

Others are intended to give a clear vision of the current state of affairs. During the first week of March the European Commission, in conjunction with the Interior Ministry, Mesa 10, and PHARE, held a conference to assess the status of government administration and propose reforms. In its assessment, the conference found that public administration - at the state and municipal levels - was not friendly to the citizen and was not effectively managed. "State administration has been politicised, which has had negative effects," it found.

For once, state and local officials seem to be in step and working towards a common solution. Zlacký, for his part, agreed with the findings of the March conference. "Right now local government is not very influential. We need to increase its economic efficiency and decrease government red tape," he said.