Vladimír Palko: "These are not squabbles"

Ever since the parties of the current government won a landslide victory in elections last September, the biggest government party - the Slovak Democratic Coalition (SDK) - has been wracked by internal division over whether it should remain united or return to a coalition between its five founding members.
The most aggressive faction within the SDK has been the conservative Christian Democrats, eight of whose members have already left the SDK and returned to their mother party. Political analysts have said that the Christian Democrats (the KDH) are trying to position themselves in the vanguard of Slovak conservative politics for 2002 elections by resuming their identity as a party and shedding some of their current left-wing partners in the SDK. 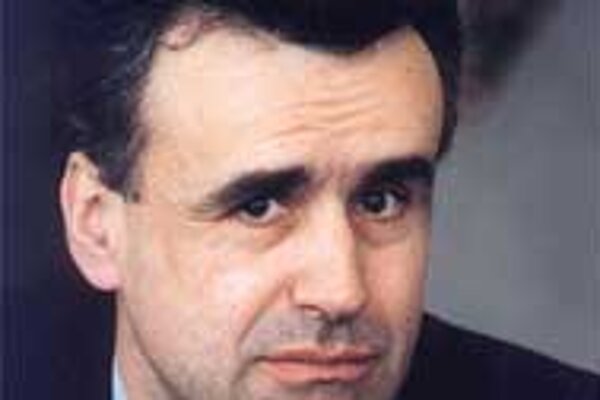 Font size:A-|A+  Comments disabled
Ever since the parties of the current government won a landslide victory in elections last September, the biggest government party - the Slovak Democratic Coalition (SDK) - has been wracked by internal division over whether it should remain united or return to a coalition between its five founding members.

The most aggressive faction within the SDK has been the conservative Christian Democrats, eight of whose members have already left the SDK and returned to their mother party. Political analysts have said that the Christian Democrats (the KDH) are trying to position themselves in the vanguard of Slovak conservative politics for 2002 elections by resuming their identity as a party and shedding some of their current left-wing partners in the SDK.

Vladimír Palko, a Christian Democrat and one of the leaders of the "back to our roots" movement in his party, in January was one of the first KDH deputies to leave the SDK. Palko advocates breaking up the SDK as a party and forming a right wing bloc with other SDK conservatives.

Palko is chairman of the Parliamentary Defence Committee, and a former vice-chairman of the Czechoslovak secret service. The Slovak Spectator met him in parliament on March 24 to discuss his vision of the SDK's future.

The Slovak Spectator (TSS): Recently, Justice Minister and KDH Chairman Ján Čarnogurský broached the idea of a return to the so called Blue Coalition, which in 1997 consisted of three out of the five parties currently allied in the SDK. What do you think of this proposal? Shouldn't the SDK stay united?

Vladimír Palko (VP): I have always supported the idea of SDK's transformation from a party [which was formed of five member parties to contest elections in 1998] back to a coalition of the original five mother parties. The origin of the quarrel [between SDK members over the party's future direction] lies in the fact that some people started to like the idea of the SDK as a single party [instead of a coalition]. However, discussions are continuing and the most important thing is that they don't affect the performance of the government in a negative sense. Although the media has written tons of articles on this issue, it hasn't had any effect.

Just look at the situation - four SDK deputies returned to the KDH in January - did anything happen? No, absolutely not. Four other members went back recently this month - again, no change. On the contrary, it seems that the real problems are somewhere else. They are connected with the fact that the ruling government coalition is made up of parties of very diverse political backgrounds, which offer different views on economic solutions, which may have problems with Hungarians being in the government, and so on.

The result is that the discussion over the internal re-organisation of the SDK can be absolutely free, and that it needn't carry any risks or threats.

TSS: There is one thing that could be a threat for the KDH, however, and that's if the SDK decides to continue as a single party and actually expand its membership base. This would dilute the influence of member blocs like the KDH. What's your view?

VP: There are many variations on the future look of the SDK. My idea is that the SDK should change back into a coalition of five parties.

If we leave aside for a moment the results of discussions over the future structure of the SDK, we can say that everybody agrees on one thing - that we want to stay in the SDK parliamentary club, and we all obey its instructions [ed. note: in Slovak politics, members of a party who hold a seat in parliament can leave their party and still hold on to their seat, as long as they remain members of their party's 'parliamentary club' - the body that represents each political party on the parliamentary level].

TSS: Do you support the restoration of the Blue Coalition?

VP: The Blue Coalition was an alliance of three [conservative or centrist] parties - the KDH, the DU and the DS. It was a non-election coalition, which was founded in 1996, and it's aim was not to plot a common course for parliamentary elections. The reason for its birth was to find a common path for the three parties at that time in parliament, to work together on a petition action for the direct election of the president, and so on. However, an election coalition is a totally different kind of coalition [in that its only purpose is to win elections].

So, if we are now to discuss what form of coalition we should have here, I think that the SDK should become a kind of non-election coalition in this non-election time.

However, we have to start thinking about the 2002 elections. There, it seems to me, the SDK won't enter the elections as a coalition of five parties, mainly because of the statements of the [socialist] Social Democrats, who through their chairman have proclaimed that they would run for election together with the other left-wing parties [like the SDK government partners SDĽ and SOP]. In the end, it's more natural.

Based on that, the KDH has basically three options. Either the KDH will run on its own, or it'll create a coalition with its closest partner, which is the DS, or the DU will join the two parties, which would in fact mean the return of the Blue Coalition. So, from this point of view, the Blue Coalition is one of the future election alternatives.

TSS: How do you perceive the role of [former KDH Vice Chairman and current SDK leader] Prime Minister Mikuláš Dzurinda in this time of political reform? Is he what binds the SDK together or not?

VP: Mikuláš Dzurinda was for sure an integrating personality for the SDK. However, unfortunately, many people don't think that the SDK should stay around forever. I think so too - the SDK is a bloc which was founded to fulfill a promise it had made to citizens before the elections. I think that the same thing applies to Mikuláš Dzurinda as does to all other SDK members - they should return to their mother parties.

TSS: Do you think that Dzurinda will do so?

VP: This whole thing is in flux. It is developing, and what is not today, can be tomorrow.

TSS: But there is another problem connected with Dzurinda, and with the KDH as a whole - that there are two different camps within the KDH, one of which supports Dzurinda, and the other of which backs KDH Chairman Čarnogurský [a group which includes Palko]. On the one hand, as members of a government party, you have to support your Prime Minister. On the other hand, however, you squabble among yourselves as to whether you should support Dzurinda or Čarnogurský.

VP: These are not squabbles, these are sharp disputes over the future of the party. It's not a detail, it's a serious issue. The discussions about the future of the KDH have been broad, ranging from the KDH as a separate party to a total dissolution of the KDH.

Sure, my opinion on the internal organisation of the SDK is different from that of Mikuláš Dzurinda. I'm for a return to a coalition, and his opinion is different [to turn the SDK into a normal political party]. But we KDH members are the ones who lead the strongest fights with the current aggressive opposition, which ultimately supports the government.