The main attraction in the Government Office on February 8 was supposed to be Prime Minister Mikuláš Dzurinda and his assessment of his government's accomplishments in their first 100 days in power. And save for the curses, whistles, and horn-blasts of 400 screaming protestors gathered right outside the window - it was.
The protests highlighted the continuing tensions between the current cabinet and the former government; ruling coalition members spent their celebratory press conference blasting the former regime even as they explained their own accomplishments. 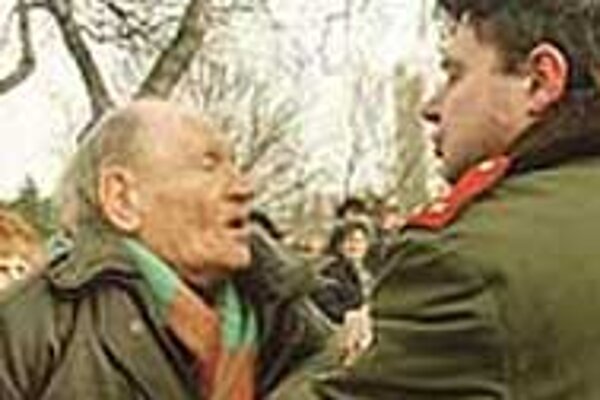 Font size:A-|A+  Comments disabled
The main attraction in the Government Office on February 8 was supposed to be Prime Minister Mikuláš Dzurinda and his assessment of his government's accomplishments in their first 100 days in power. And save for the curses, whistles, and horn-blasts of 400 screaming protestors gathered right outside the window - it was.

The protests highlighted the continuing tensions between the current cabinet and the former government; ruling coalition members spent their celebratory press conference blasting the former regime even as they explained their own accomplishments.

Dzurinda presented a 70-page document which railed at the performance of former Prime Minister Vladimír Mečiar's cabinet and pointed out its mismanagement in the areas of democracy, economy and foreign policy. The document comprises materials recently released by individual ministries of the current government, the so-called 'Black Books'.

"The past four years were times of total irresponsibility, unimaginable selfishness and greed," Dzurinda said at the press conference. He also assessed the first 100 days of his government.

"The cabinet has tried to extinguish economic fires and set standard conditions, to lock up criminals and introduce the rule of law in this country... in foreign policy, the cabinet is doing its best to take Slovakia out of international isolation," Dzurinda said.

Dzurinda also explained that during its first one hundred days, his cabinet had succeeded in achieving several goals for which they had been given a pat on back by western alliances. Dzurinda said he believed Slovakia would be part of European organisations by the end of his election term.

The government's accomplishments were set out more specifically by Ivan Mikloš, Deputy Prime Minister for Economy and the author of the analysis, in a television interview later that day. High on his list were the approval of the law on direct presidential elections, renewal of negotiations between the state, labour and employer associations, and the restarted process to divide the common federal property of the former Czechoslovakia.

"This all stagnated under the third government of Vladimír Mečiar," Mikloš said.

Peter Brňák, a member of parliament for Mečiar's HZDS party and a legal expert, took a calmer approach.

"The current cabinet devoted its operations in the first hundred days especially to the past, so it's quite difficult to give an opinion about whether its programme or vision for the future is positive," Brňák told SITA, an independent news agency. "We will have to wait for a positive programme from this cabinet."

The cries of the protesters gathered below the window struck a chord among political analysts and independent observers, whose attention was fixed not on legislative achievements, but on whether the goverment's focus on problems inherited from the former cabinet was justified.

Pavol Demeš, chairman of the Third Sector Gremium, an association of Slovak non-government organizations, said that people were beginning to worry that the government would be distracted from solving the nation's pressing economic problems by its desire to be revenged on its predecessor.

"Citizens are concerned that the partisan interests of [ruling] coalition parties are being given higher importance than solving actual problems," he said.

But Demeš added that the cabinet had not had enough time in power to have fulfilled the goals outlined in its government programme. "They couldn't have done more than analyse the given state," he added.

Clean hands in name only

The government analysis accused the Mečiar government of breaking numerous laws and ignoring the democratic principles it had claimed to support. "The 'Clean Hands' programme that the former cabinet approved in order to fight corruption... was only a rhetorical attempt to influence public opinion," the document reads.

In his speech, Dzurinda reminded his audience of notorious Mečiar-era cases such as the stripping of HZDS deputy František Gaulieder's parliamentary mandate in December 1996, the passing of unconstitutional laws on parliamentary and municipal elections, and the inability of parliament to elect a head of state since former president Michal Kováč left office in March 1998.

According to Dzurinda, the former cabinet led the country into economic decline and international isolation. "Almost all areas of social life worsened," Dzurinda said. "This government was left with nothing but a table full of unpaid invoices and an empty state account."

During the meeting, the protestors, who were kept outiside the governmental grounds by a gate, yelled things like "Dzurinda's Gestapo!" and "Traitors!" as well as anti-Hungarian and anti-Gypsy epithets.

"Dzurinda promised us the world during the election campaign, but then he raised all the prices" said one protester. "We had freedom under Mečiar - now we are prosecuted and threatened!" another shouted.

Dzurinda told the press conference he was not bothered by the catcalls. "I took a look out the window but I don't think anything dramatic is going on," he said. "I won't get lose my temper, as opposed to my predecessor."